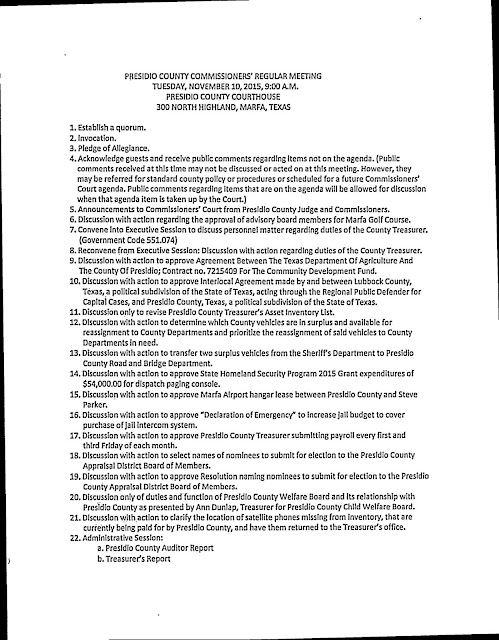 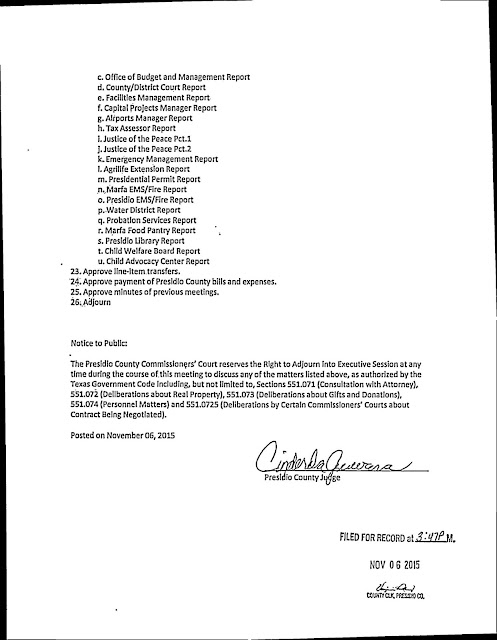 I am sorry my notes here are late to post; I had trouble with my charger and was unable to get this up before now.

The meeting went fast and it was a bit hard to hear since we were in the main courtroom for the Presidio County Courthouse. I was took as complete notes as I could. I think the important thing here is that a good dialogue between entities has been started regarding EMS and the potential for forming a countywide Emergency Services District (ESD). I definitely think the meeting was productive and I was impressed with the professionalism of the elected officials from all three political entities.

Jeff Stokes with Poncho Nevarez officer.
Border Patrol EMS here
Sixto Rey, DPS
Many many people present representing multiple agencies from within and beyond the County.

City of Presidio plans to cease emergency services to the County in the next fiscal year.

Mayor Ferguson: says that immediate help can be addressed by finding out how to help Marfa back up Presidio. Dan Dunlap says that the city of Marfa has applied for a grant through the hospital district for a new ambulance. Meeting Nov 12 the in Marfa to discuss. New ambulance would be helpful towards restoring backup service but City of Presidio needs money and a new ambulance does not help that.
City of Presidio has two ambulances, city of Marfa has one. Marfa has four paramedics. Marfa's backup ambulance has no air conditioning.

Carlos Nieto says that we're talking about badly needed resources. Wants to pin some funding on the hospital district and the federal government. South acuity has federal properties with no payments in lieu of taxes and yet services are received.
We should consider approaching the hospital district for money.

L. Hernandez says that if both cities are in agreement of forming an ESD then we should move forward. Are both cities in favor? Dunlap says that it has not yet been on an agenda, but city manager Mustard favors it. J. Ferguson says that city of Presidio needs more education and information before they can make a decision as to whether to support it or not.Jim White asks about the 2012 effort to create a south county ESD service. Ferguson says he is not sure, but he thinks the legislature either rejected it or it never quite got there.
Marco Baeza says that in the past an ESD would have raised about $200,000. Dunlap says that current max rate would generate about $400,000. Hernandez says that cities would need to help. Dunlap suggests that an ESD could contract with each city's EMS service. The problem is how to keep Presidio City going until then at the least.

Josie Simpson says that the city of Marfa has had to absorb the costs and raise water rates to pay for EMS services and everything else. Dr Billings asks about collection rates for City of Marfa. Dunlap says that Medicare and Medicaid have revamped their processes and it has made collections slower this year. Collections delay has cut it in half, basically.
More talk about collections, billing difficulties...

White says issue is clearly funding first. Suggests reaching out to Congressman and representatives to get some Fed help. Need to find revenue sources. Judge says that there are no interlocal agreements in place. In the near term we should try to crate some.
Marco Baeza says the old way worked well for years, there was never a problem. We could go back if possible. Mayor Dunlap says city would like to sit down and hammer out a mutual services agreement.
Mayor Ferguson says that we are in crisis. Judge Guevara says that the Health and Safety code discusses mutual aid agreements. They are needed for day to day operations. Hernandez asks City of Marfa if the lack of an agreement or the lack of a good ambulance is keeping Marfa from backing up Presidio. Simpson and Dunlap say it's mostly equipment but also that City of Marfa residents have suffered when ambulance is serving Presidio; deaths have occurred.
Dimitri Garcia mentions that there has been some miscommunication, he would like to help City of Marfa and the City of Presidio to come together. Challenging situation.

Dr Billings has some info regarding the Medicaid 1115 waiver program. Way to use state funding to expand health care opportunities. Open to governmental and non-profit entities. Has been used in City of Houston with this program.
Perhaps a regional EMS system? With state funding...
He thinks the problem is financial and also training. Need more EMT basics, intermediates, paramedics, etc because of distances traveled.
Perhaps approach Sul Ross to see if a program can be developed.
Carlos Nieto: agrees with Billings. Cost of operations is huge because of trained staff.
We sold grow our own if possible. Distances and terrain make things difficult.
Officials need to do their part as leaders. People of City of Presidio have always been resilient, can do much with little. If the highest calling of public service is not to preserve human life then he does not know what it could be.
Dimitri says he agrees but let's look at timeline, brass tacks. City of Marfa need an ambulance, City of Presidio needs money. Let's find some answers. ESD is years away, let's look at now. What can we do for each other to fix our problems?
Aranda says we should look at a countywide answer with an ESD. What are we looking at there? Judge goes through the legal process of forming an ESD. Petition, special public meeting of commissioners, unanimous vote would result in calling an election. If an election passes, then take it to Legislature.
Dunlap says both cities would have to pass a resolution to be in this ESD.
Billings asks if there would be any benefit to including Alpine, Brewster County. Dunlap clarifies that we are already in a bind with Alpine on the Hospital District issues.
White says in the short term the cities need to get together and find some short term solutions. Dimitri agrees. Marco Baeza asks how can we pay for the personnel. Dimitri says we need to look past that for now and look for the benefit of cooperation and find a way to do it. White says there will have to be some outside funding. Tavares agrees but it is not easy. Advocates working together.
Dimitri says that if this is a County priority then for next year the budgets need to reflect this.
Tavares says both cities are in the same boat.
Dunlap says that it seems as if the City of Presidio has a bigger hole to dig out of that Marfa. Tavares reluctantly agrees. Aranda says it doesn't matter, we're talking about communication. City of Presidio has no Paramedics and Marfa has four. Presidio has seven people who can go on an ambulance.
Judge asks about ambulance grant. When is it expected? Mayor Dunlap says he is going to Dallas to look at equipment in Nov. regardless of grant status. Will pursue a new ambulance regardless. Does not know how long between ordering and receiving new ambulance would take.
Marco Baeza asks if Marfa would back up City of Presidio if a new ambulance is obtained. Mayor says yes, with agreement in place.
Ferguson asks about Presidio's extra ambulance. Yes, it is in good working order.
Hernandez wants to know how County can assist with two cities cooperating.
Dunlap suggests that the County next year allocate money into an account that both cities can bill from for extra jurisdictional service. Thinks it is the best way and there should be an agreement on how it should work. Hernandez says that the only problem is that that still does not cover the cost of offering service. Marco Baeza agrees that just having the ambulance available is the real cost with staffing, insurance, etc.
Manny Baeza points out that the fixed costs are the same for both cities.

Judge asks if people are agreeable to pursuing an ESD in the long run. Basic agreement that nobody is vehemently opposed in exploring it. Marco Baeza says there are "concerns". White says that there's not really another long term option.
Mayor Ferguson says that educating ourselves is necessary, we need to learn mor. Dimitri agrees, says we are currently ignorant, need to learn more. White says that the fixed costs are huge, we need some outside source of funding, there's no current funding. An ESD is a possible solution. Brings up federal reimbursements, non-profits not contributing tax monies.
Carlos Nieto encourages the State of Texas to contribute as well. Big Bend Ranch State Park and other properties do not contribute dollars. We need to encourage the  State to participate as well.
Jeff Davis County ESD formation included info from an ESD organization called Safety. Can help with education, information, a great resource. Recommends that they give a presentation.
Judge thanks everyone for sharing this information. She is open for suggestions, asks if they would like to have joint meetings. Manny Baeza requests an ESD workshop as soon as possible, preferably before the holidays.
Dimitri Garcia echoes that sentiment of cooperation. Dr Billings suggests including Hospital District folks. John Ferguson asks of we should try to pursue the Feds for funding opportunities. White says yes, we need to reach out.
Carlos Nieto suggests researching other Texas border counties and what they have done. References DPS being sent here, try to pressure agencies to give us more attention to help preserve officers at risk.
Commissioner Vasquez would like to meet again, more often, regardless of location.
White suggests meeting in ten days. Others recommend coordinating the next meeting with an ESD education session. Ferguson thanks everyone for a productive session. Judge invites everyone to have food, thank you all.
Adjourn at 7:27

Posted by David Beebe at 3:25 PM No comments: