Future of Satellite Radio in my opinion

So, for now, Satellite radio is the hot deal. Lots of channels, can receive nationawide, $20/month, still has commercials, celebrity DJs. Ok, so that's all cool. The future of Satellite Radio is not bright. Stating it here: The future of radio is online streaming of stations- streaming in your car, streaming on your radio, cell phone, whatever. For the price of internet service, not an extra subscription of $20/month. It's already happening, but just wait until people actually figure out that their phone can stream and get hooked into their car stereo for nothing. It's coming... Sell your Sirius stock. -DB
Posted by David Beebe at 5:42 PM 1 comment:

City work, trying to force relaxation upon myself, etc

It's chilly out here and I'm enjoying cool night in the Airstream. Now that I've extricated myself from my place of business, my apartment, and a multitude of other obligations, I'm looking up and still swamped. What to do? Besides the visions of furthering recycling in the region and working on more local government housecleaning and improvements, pretty much the future holds cooking and music, and hopefully not much else. Everything I own is no for sale minus my structures that I function within (Airstreams) and a couple of vehicles. I have to hold on to 2 drum sets, 2 bass rigs and some miscellaneous guitar/keyboard/etc equipment in order to function as an occasional "pro" musician, but the rest is up for grabs. Looking for approximately 3/4 of face value for people I know and market value for the rest. Anyway, I'm setting up a TV in the Airstream soon to try to force myself to go home and watch movies or whatnot at night. January 1 I'll be opening Boyz2Men tacos 4 days a week for a 2 month trial period and also be quitting drinking UNTIL Lent. that will work better for fun and relaxation for me this year, and will give me about 50 "dry" days during a busy work season. Although Marfa is DEAD during the early part of the calendar year, it's a great time to get ahead on building projects, long term planning [see Beebe- PadresMarfa, Jan-Mar 2009, Jan-Mar 2010, Jan- Mar 2011] and the like. 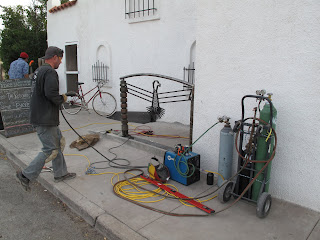 Goals for 2013-- Like everywhere else, austerity And peace and quiet And saying "No" while achieving in the ultimate in "Yes" And better fitness It's looking more and more like I have a five or so year game plan to reassemble my finances following the Padres armageddon and to, at the same time, build a giant platform of singularity upon which to do cash flow generating work from here on out. Solo (with help from friends) but SOLO. More good news- Andrew Gerfers (Conrads) is moving out here this week- means more music for me with someone I enjoy playing with. Bodes well for 2013... Lastly, I'm resolved to focus more and more on a vision for Presidio County as a single entity, with north and south county working together or in tandem, rather than is two separate fiefdoms. It's time...
Posted by David Beebe at 7:15 PM 3 comments:

One has already been launched (Boyz2Men Taco Trailer) and the other will launch next month. ASTRO Commercial Recycling- for Marfa businesses. Recycling services for glass, aluminum, plastics 1&2, cardboard, newspapers & magazines. Picked up weekly at your business. Recycling cans provided. $15/hr plus a $2/hr donation to Big Bend Recyclers (through ASTRO) non-profit recycling regional group. All 5 requirements fulfilled with these two. DB
Posted by David Beebe at 7:12 PM 3 comments:

The FIVE parameters that every project I do from now on will conform to.

I heard a story on NPR today about new cars and how much better they are than older cars were. That may be true in a lot of cases, particularly for certain makes and models, but it's my opinion that oils and lubricants have gotten so much better and deserve much of the credit.
It used to be that you could expect a car to last 100,000 miles if you took good care of it. Now, today, most would expect a modern car to last 200,000 if it's taken care of. I have noticed that older cars with good engine designs can also achieve that kind of mileage, even with their old designs. Take Chevrolet V-8's -small and big blocks. Rebuilt motors from the 70's and 80's lasting another 200,000 miles. Chrysler Slant 6's and chevy 250 straight 6's lasting several hundred thousand miles- original motors.
Anyway, I think it's the oils more than the engines.
Posted by David Beebe at 9:27 PM 2 comments:

What this Spring Break/SXSW booking season has taught me

Never have I seen the live music "industry" be so slack, lazy, and lame. This, coupled with the same sense of entitlement that musicians are known for. That has not changed.
Not ONE "national act" that I have booked here at Padre's for the SXSW/Spring Break season has sent me any posters to put up and R Halpern at the newspaper has not received any promotion from any of the acts even though sending a digital press kit is free, unlike back when I toured with Banana Blender and The El Orbits. Nothing.

Today I canceled a show for 2 Mondays from now after receiving an email from the agent, asking for, among other things, my "Facebook event Page Address" This, coming from NO POSTERS, NO PROMO band.
Canceled the show- I am disgusted.

Anyway, my lesson is that I am going to get hard on these BSers and cancel them is they show zero signs of professionalism. I will be sure to give them 2 weeks notice, as a professional myself. This way I can avoid
1) a Cover Charge for an act NOBODY has heard of that doesn't even have a poster hanging on our front door
2) Paying a doorman, soundman, meals and beers for a band playing to a near-empty room
3) Wear and tear on equipment, stolen microphones, DI's etc
4) All the rest of the crap that comes with hosting people in your house who are touring with "Dad's Gas Card"

AND- Posters sent via email "for me to print" are not acceptable
David
Posted by David Beebe at 3:13 PM No comments:

I will now admit that I pretty much love listening to Alex Jones, a certified doomsayer, on his podcasts while doing the occasional and arduous task of dealing with band bookings.
85% of what he says is pretty much off my radar, but I LOVE the fact that he pretty much can't stand either of the two political parties (since they are basically the same with a different BS commercial stance) and that one of the things he hates the most is the co-opting of public projects/funds/ideas to the private sector in the name of security/efficiency and accountability.
Admittably, I look at public building and infrastructure projects and their costs and I think that, generally, 1/3 of the cost could have been saved without the influence of "the public good". That being said, the public/private partnerships tend to have none of the building efficiencies of the private projetcs combined with the public side ALWAY taking all of the risk and, if said project fails, the public sector is faced with the long term bag.
Guilty pleasure.
I think. more to the point, that this guy is pretty much insane and I would have, in a different life, been as intense as he is had I not ---
1) Made a decision to use some of the talents God gave me to produce music, which is theraputic
2) I had not been prescribed blood pressure medecine to clam my physical body down 11 years ago
and
3) Had a stablizing great group of friends to keep me thinking within some reality that resembles reality

Those folks who have known me well forever (family, Allen Hill, Banana guys, Christy Kern, all my college friends) and certain Alpine Bread & Breakfast regulars and many others can probably vouch for my intensity when I get pushed to my naturally intense origins. I am happy I make the decision pretty much every day to chill (believe it or not) Thanks, y'all- life is better without worrying about everything that doesn't really matter- D
Posted by David Beebe at 2:10 AM No comments:

Rockets can't understand why attendance is in the toilet

The Houston Rockets, even without an (NBA) superstar are in 6th place in the Western conference. Granted, that position is tenuous at best but they are wondering why they are at the bottom of NBA attendance.
Toyota Center= the lamest venue in the bigs
Watch it on TV at any bar anywhere- better atmosphere and better prices, and even a better crowd- even if your girlfriend gets harassed all night.
Le$ Alexander leaving the Summit was the end of truly fun NBA games in H-Town.
Posted by David Beebe at 12:25 AM No comments: