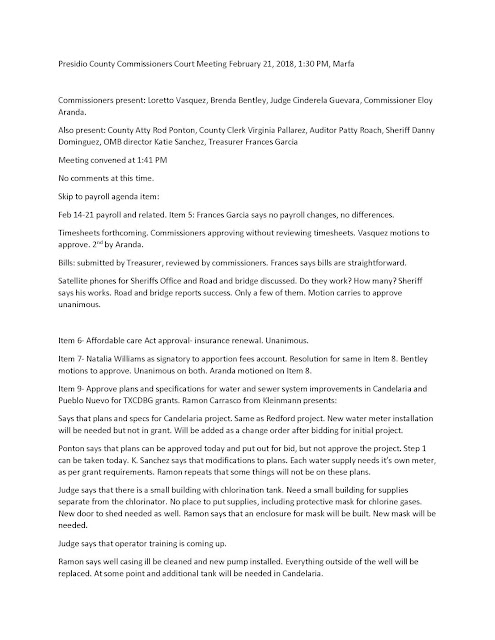 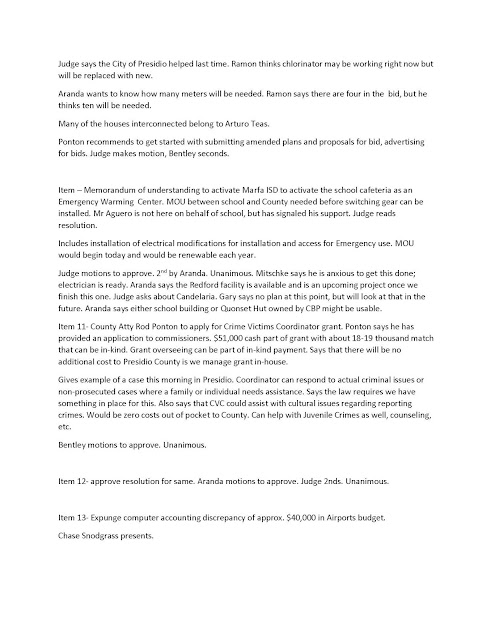 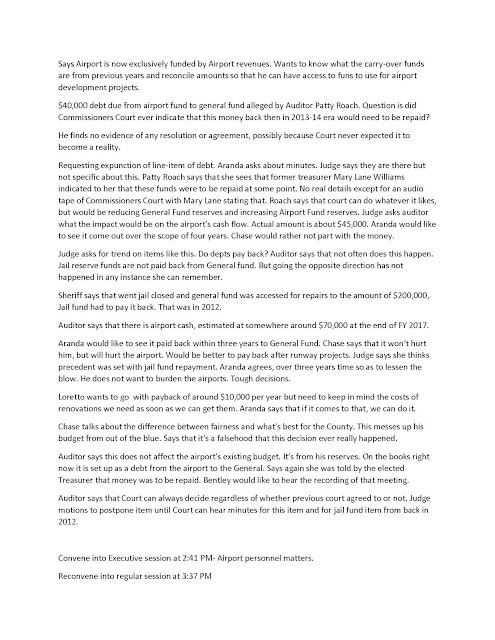 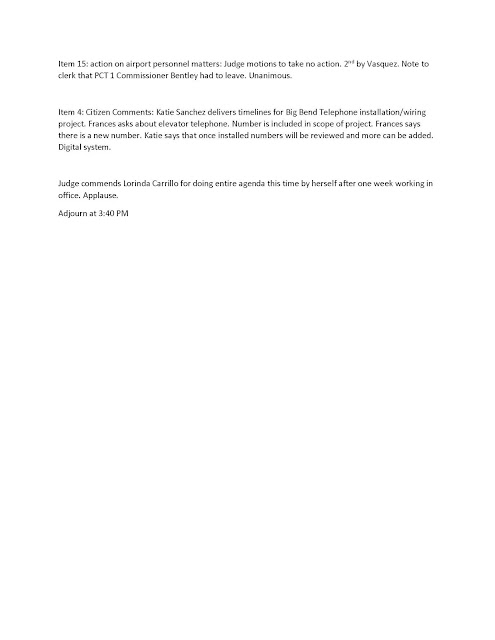 Posted by David Beebe at 4:41 PM No comments: 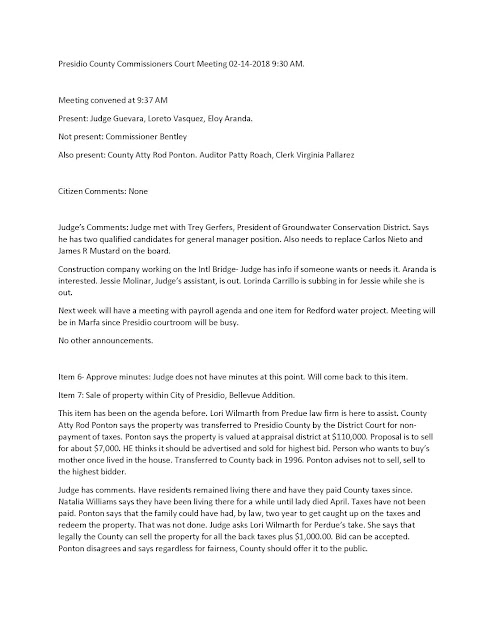 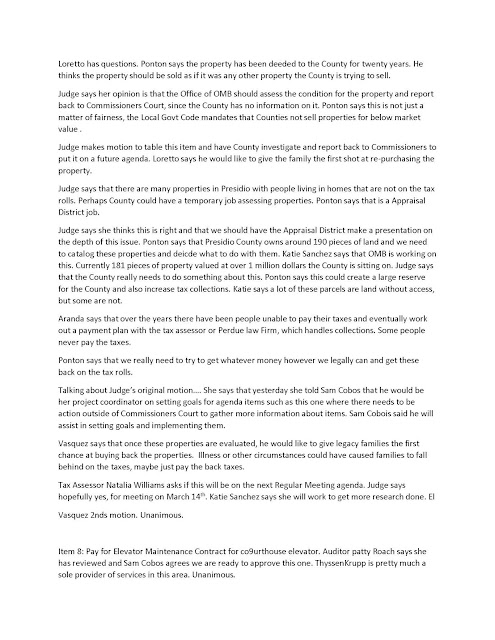 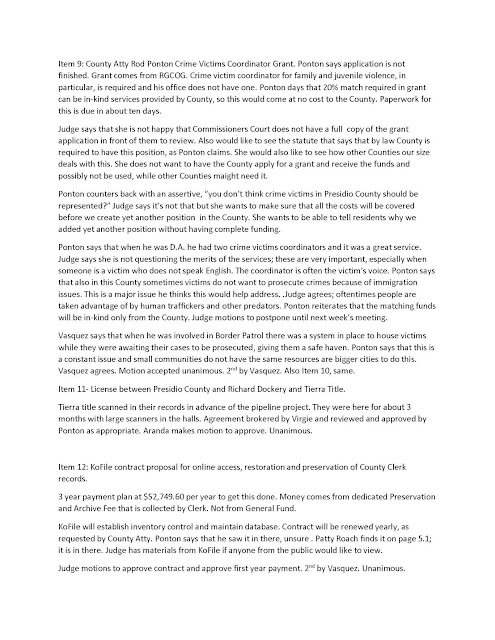 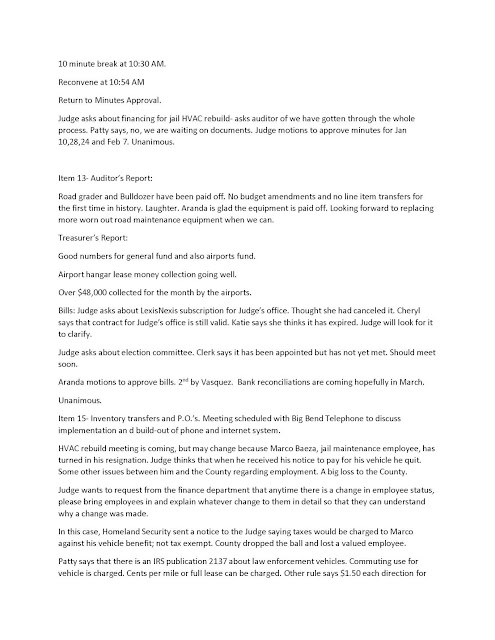 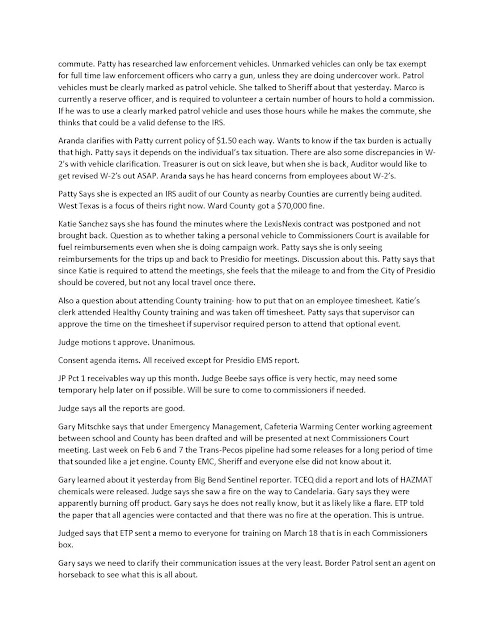 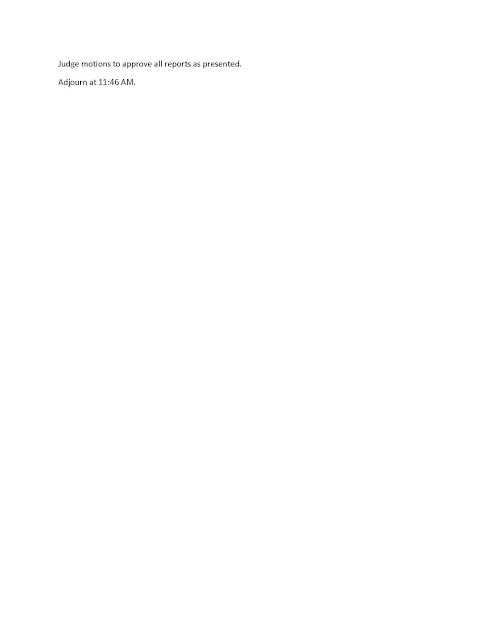 Posted by David Beebe at 1:30 PM No comments:

Meeting called to order at 5:08 PM

Communications from County Judge: been a while since there was a meeting. Minutes for last meeting not completed. Looking for tape recording of meeting. Jake may have a recording. May 16, 2017.
Judge says that Presidential permit is in hand. Corridor study has begun. Jake Giesbrecht has info on corridor plan.
TXDOT has hired engineers. Board members need to participate. Very important to be part of the focus group as well as part of the planning group.
White says we need the input of everyone affected. Ponton says that the study will set in stone future TXDOT expansion issues. Including City of Presidio issues around the port. Next meeting March 28 in Presidio. Hosted by TXDOT.

Communication from Board members: invite Joe Portillo to speak. City Admin for Presidio.
Portillo says that many things are in motion. City's audits from 2013-2016 are complete and tells City how to fix the troubles. Work is happening, being addressed.
Judge attended that meeting. Mayor Ferguson is attending to the problems.

Item eight
Communications from executive director.
Written report from Jake Giesbrecht.
Peanut Association of Oasis CH. partners with Seminole TX. Peanut growers are in Seminole.
Met on July twelve with MOTRAN regarding corridor study.
Challenges of having a small port include not enough business to warrant USDA officer, but TDA has an agreement with USDA to be able to do this. Talks about that. MOTRAN and Odessa are arguing. Odessa city council not necessarily on board. Jake says it will be best to deal with MOTRAN solely.

BTAC meeting in Austin. Letter distributed and sent to Washington. Four of twelve NAFTA issues are for us. Regarding renegotiation. Pemex of Texas master plan of energy sector. Natural gas big time.

November
NADB in San Antonio is interested in funding the bridge construction project.

Codech trade board in Chihuahua city presented our plan to representatives of twelve regions of Mexico.

December
Brad Newton and Jake went to South Orient groundbreaking with Tryon Lewis, former TXDOT General. Texas Pacifico. PIPA should design a shipping container loading dock area.
State of Chihuahua intends for our port to be the primary agricultural port for the State.

Arturo Fuentes says that TXDOT and SCT  have not signed the bridge contract. This is a major issue.
Contractor wants to start as early as next week. Jake thinks maybe not until August. Bad news.

Railroad, focus is on modernization of railroad bridge. No permit authorized by Con Agua. Ferromex has an interest in Union Pacific, it looks like they do not want the bridge to be completed.
BNSF is interested in this line. Jake wants TXDOT to pay attention to BNSF.
PIPA needs to be sure to design a good bridge is needed.
Jim White says the board should not be discouraged by this. PIPA board just needs to fight this, let the railroads work this out.
Building a multimodal dock system will demonstrate our resolve.

White asks for motion to approve all these.
Ferguson motions. Judge seconds. Unanimous.

Jake asks for guidance on the bi national meetings. Are we going to keep participating?
Judge says it's not on the agenda, so we can't discuss. But in the past Jake has gone to Judges office and asked for authorization and she has given him authorization. White advocates for attendance no matter what the future holds.
Judge agrees that relationships are of utmost importance.

Item twelve
Status of board member slot open
Lorenzo Hernandez slot open.
What do we want to do? No letter of resignation from him submitted.
Ferguson wonders if this is an oversight on his part. Hmmm.
Judge wants to know how Board feels about requesting a letter from him.
Or did County resignation automatically remove him?
Ferguson says bylaws are clear on who is a member. Since he is not a commissioner he thinks that automatically removes him.
White says he thinks that is correct but we should be careful and need to consult with an attorney about due process, etc. Ferguson agrees and motions to consult with an attorney and take no action at this time.
White seconds
Unanimous. Judge asks for people to consider possible replacements if he is off or resigns. 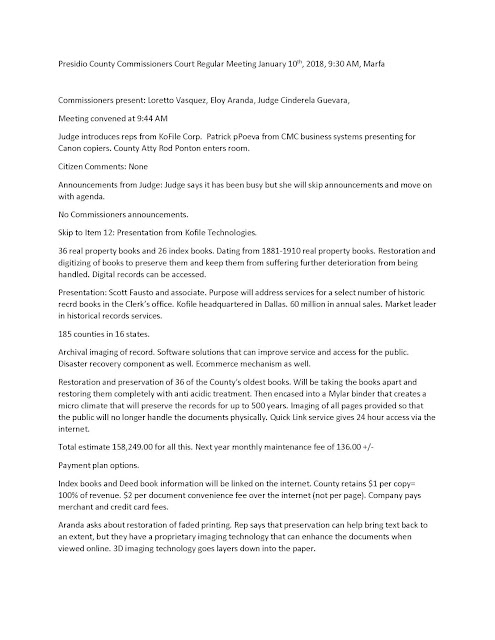 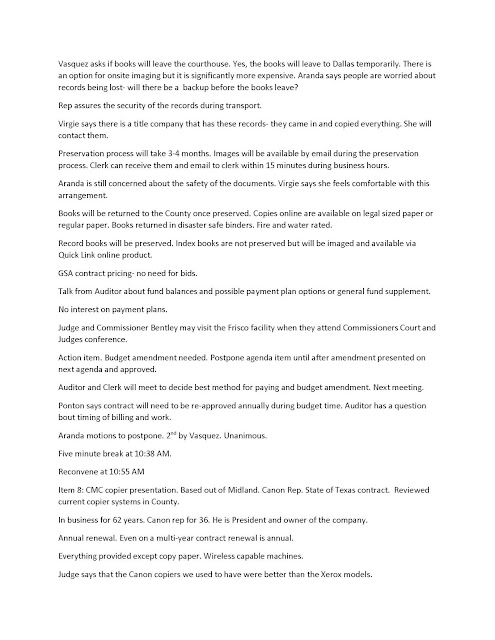 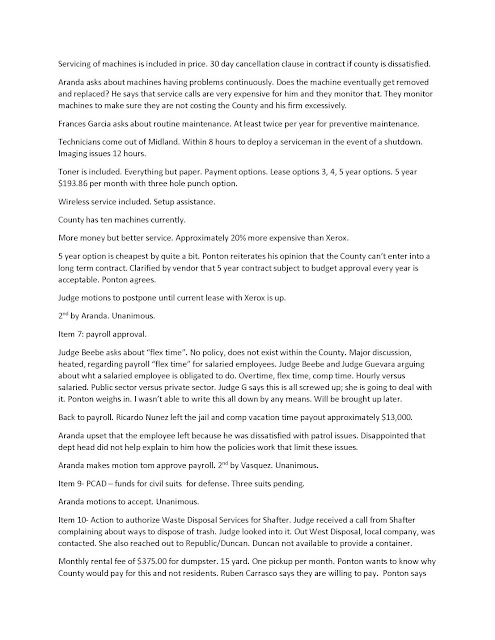 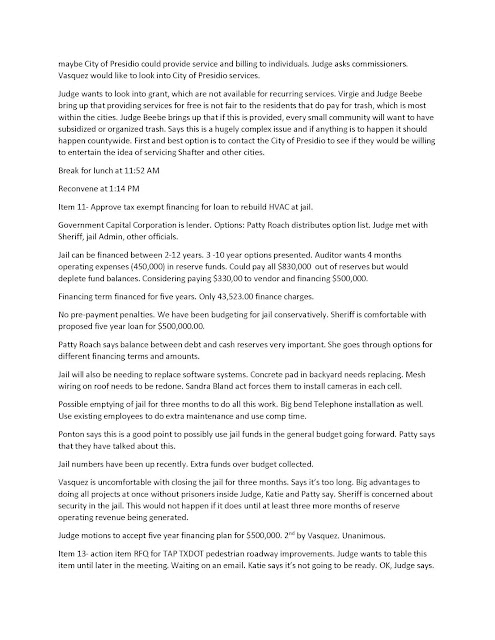 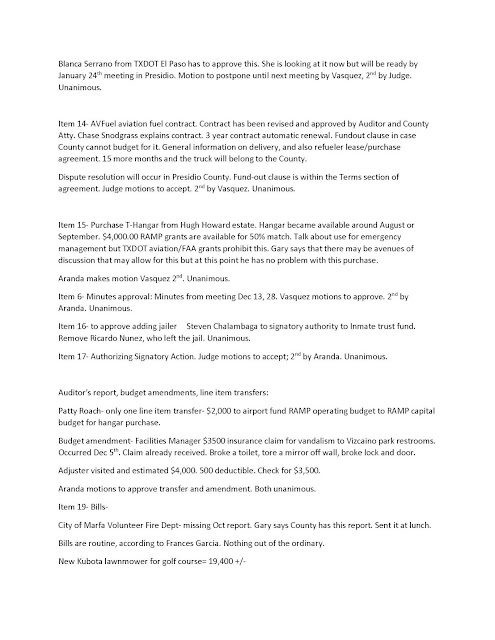 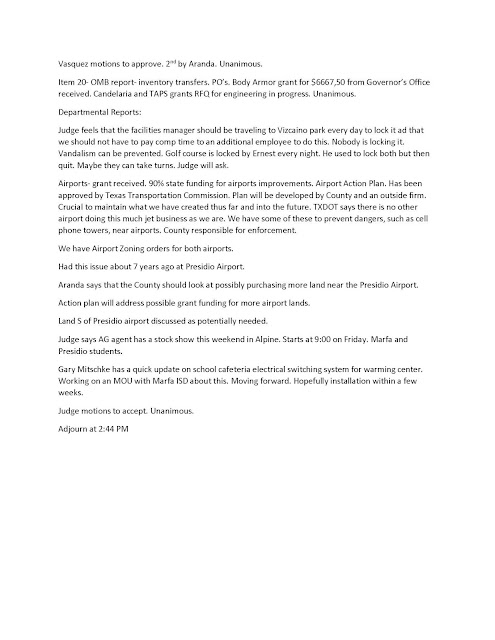 Posted by David Beebe at 9:21 PM No comments:

My Battery died before the meeting ended. www.bigbendnow.com has a good recap on the rest of the meeting. Go to "Archive" section and choose January 2018. 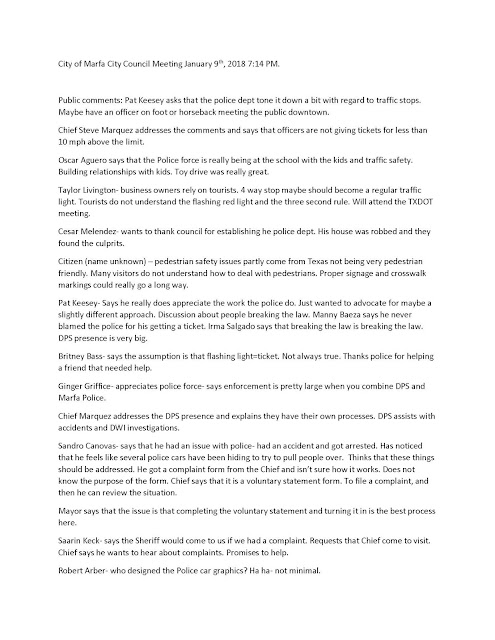 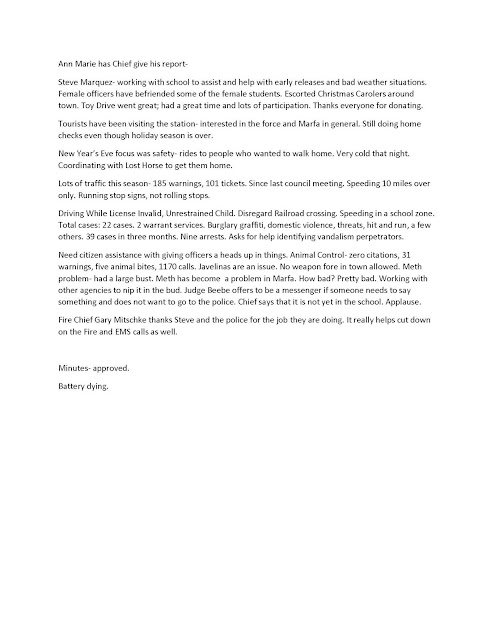 Posted by David Beebe at 9:02 PM No comments: 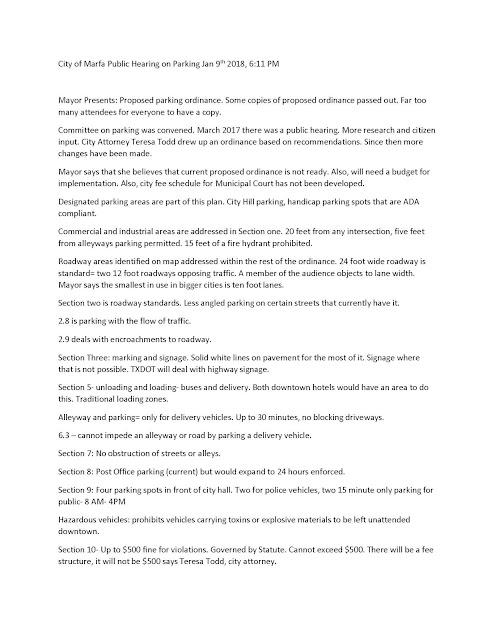 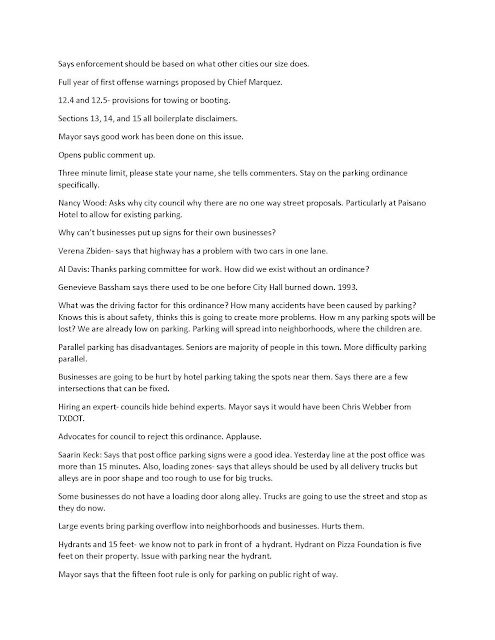 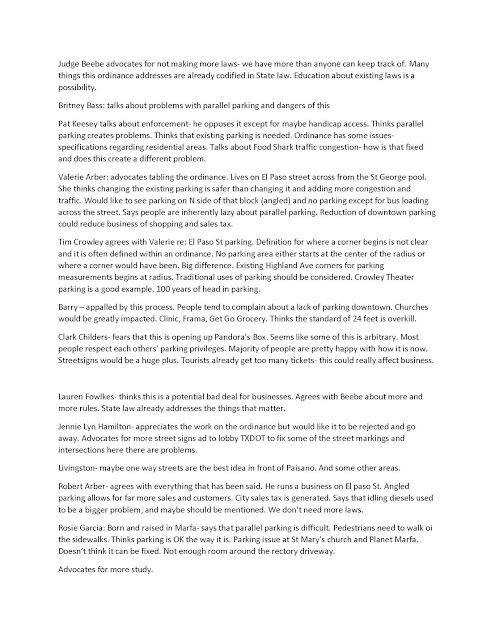 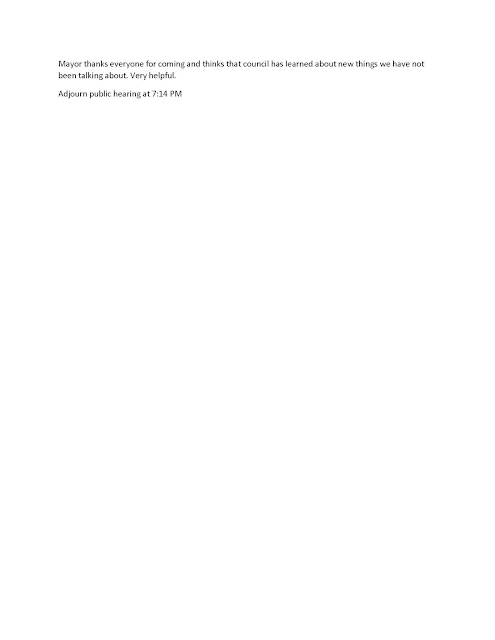 Posted by David Beebe at 8:57 PM No comments: 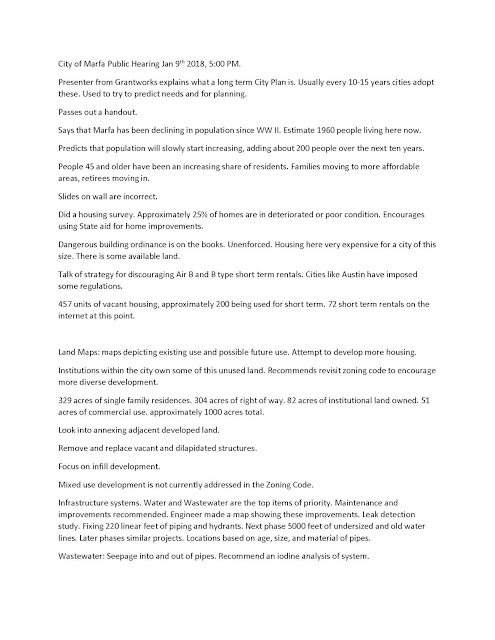 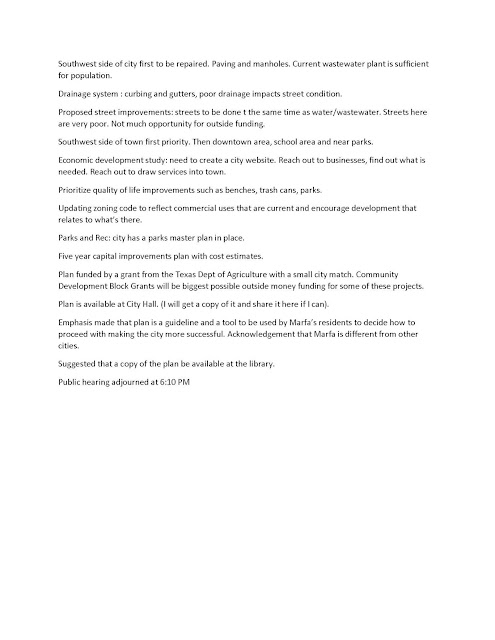 Posted by David Beebe at 8:47 PM No comments: