I am still getting acquainted with the camera and sources of power within the courthouse and the Presidio courthouse Annex. I learned this meeting not to sit near the copier or door and to bring a long extension cord.

All the videos from this and other meetings (2 so far) can be viewed HERE
Scroll to the bottom of these notes for individual links to the video segments for this meeting.

The video begins with a bad camera angle. Later it gets much better.
The most interesting part of the video is the Hwy 67 overview presented by Kleinmann consultants. I recommend watching it so you can see what the overall plans for that road look like today, as it nears design proposal completion.

Here’s my annotated notes on the meeting. Beneath are links to the videos on the Vimeo channel.

Payroll approval:
Nothing out of ordinary . Discussion about payouts after final pay period.
Katie Sanchez and Patty Roach have a heated discussion about final payroll timing and distribution. Patty Roach clarifies policy as being the pay period following the last pay period the employee works hours is when any additional pay for vacation time, etc will be distributed.

17:11 in video
Line item transfers and budget amendments: vehicle repair budget increased from insurance check, Sheriffs office.
Approved
Monthly report: jail has drainage problems in block 6.
Stonegarden grant: deputies have had training, not yet working. Grant does not provide for reserves to work, difficult to schedule overtime for current deputies.

Video Part 2
Bills: training bills, estray cattle bill, Ponton reiterates his opinion on the County being an open range county and what that means.
JP conference in Padre coming up.  Says estray law is only for unknown cattle.
Approved
Balance reports April: approved

End of Video 2
continued on Video 3
Concluded at end of video 3.

Presentation about the initiative until 36:00 in to Video 4


Item 13: disbursement of salaries and routine office expenditures. Judge motions to postpone, but this item was brought on by Legislative action regarding payroll approval, amending meeting times. Judge wants to hear opinions from each commissioner. Item postponed.


Knight says that Elias Sanchez said the road going into the old cemetery is washed out again. Knight talked to Ruben about fixing it. Knight says this is a public cemetery, public road.

Posted by David Beebe at 7:35 PM No comments: 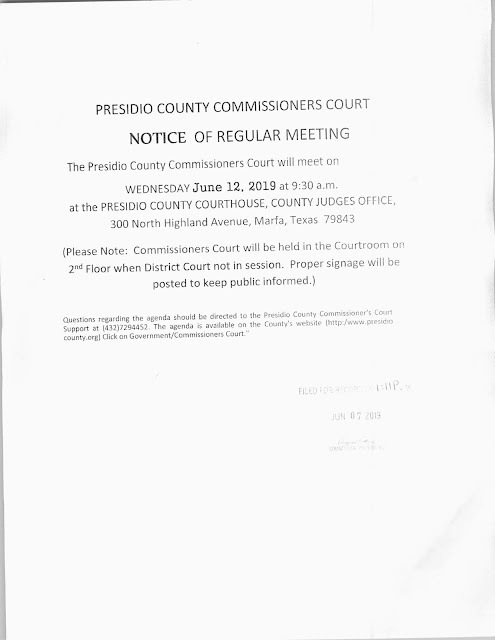 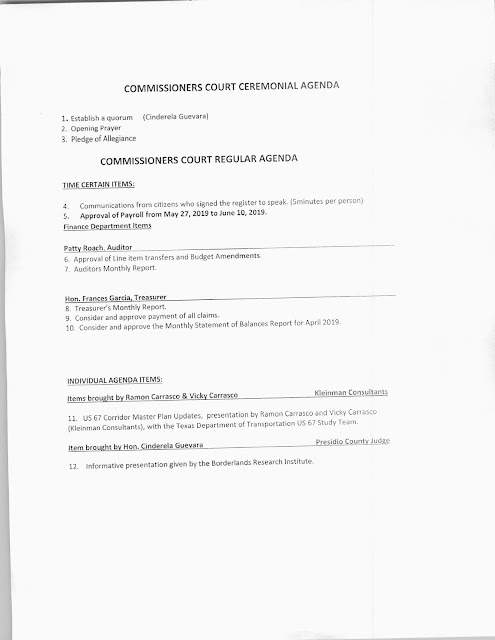 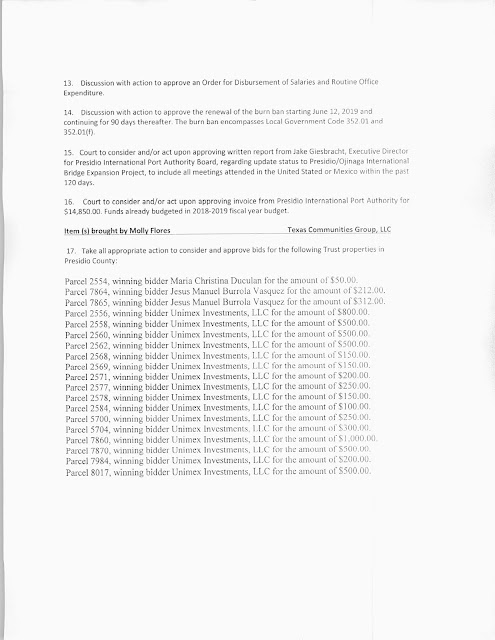 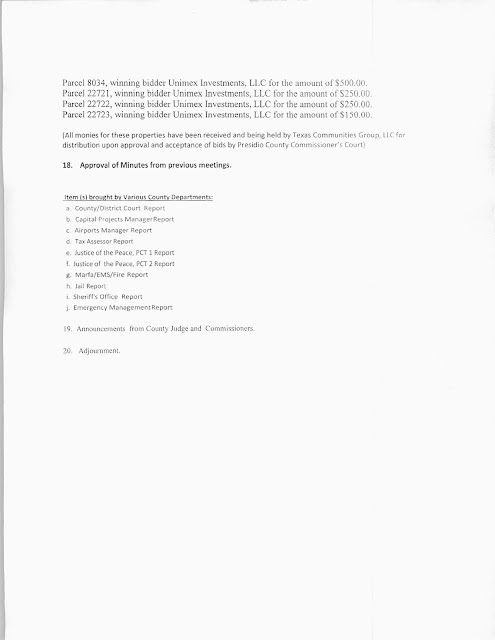 Posted by David Beebe at 3:07 PM No comments:

Notice of Master Plan for Highway 67 meeting (in Spanish). A detailed presentation of the generals of this project was made in Commissioners Court Meeting 6/12 and it captured on the live video in full. Very informative. The same information will be presented at these FINAL public meetings listed on this flier. More information at TXDOT 67 website 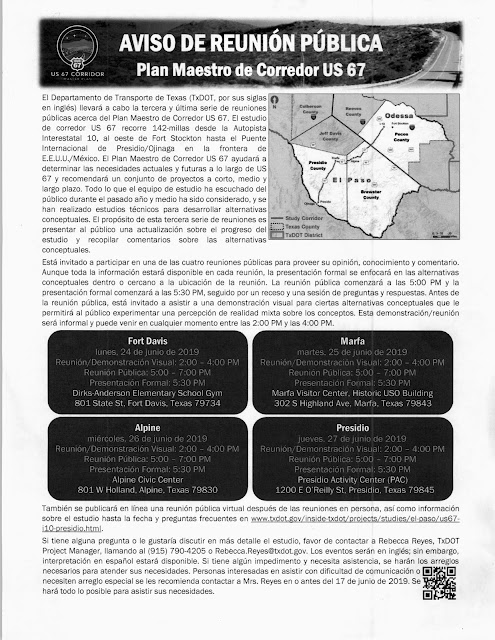 Posted by David Beebe at 2:49 PM No comments: 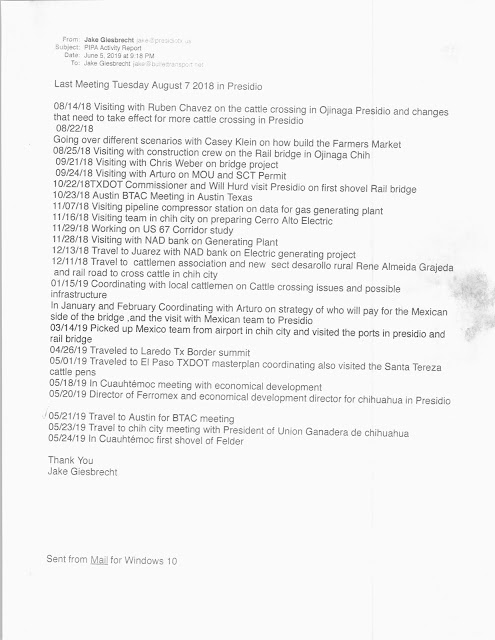 Posted by David Beebe at 2:38 PM No comments:

I videotaped the proceedings, but sadly, as a new adopter of this technology, I forgot to turn on the external microphone, but had it plugged in, so there was no sound.
I will not make this mistake again.

Attached are my notes from the meeting. Notes are limited due to a dying iPad battery. Most of the meeting is covered but not all.
Notes on Presidio International Port Authority Meeting 4 pm Thursday June 6, 2019

Treasurers report and pay reimbursements in one item. 29,932 in expenses since last meeting.

Judge motions to table 8 and 9 and move on to item ten.
Approved

Reimbursements: approved, not all immediate.

Item 8: executive director report: Jake Giesbrecht
Jake: Borderplex alliance opposes tariffs.
Talking about tariffs and Trumps rationale.
Cattle exports through Ojinaga are on the rise.
Median federal government is going to spend a lot of money on the Ferromex rail line to the rail bridge.
Joe Portillo enters meeting at 4:49

TXDOT requires an MOU for the bridge construction. Money is now budgeted, but this was a hold up.
NADBANK generating plant- working with Alonso of CFE.
Public private partnership.
Cattle group meeting in Chihuahua did not go well. Santa Teresa interests in Chihuahua. State of Chihuahua wants to help us, though.
42,000 head of cattle crossed so far this year. Building up again.
Mexico is now the US number one trading partner, as often few weeks ago.
Our port is now doing 100 trucks a day, up from 30.
Problems with being in the El Paso MPO TXDOT sector. They put El Paso  above rural.
Report accepted unanimously

Item 9: 559 funding item.
There are reasons to keep this, whether we use it or not.
Portillo explains how the CBP can use the local government
(Battery to iPad died at this point)

Posted by David Beebe at 2:01 PM No comments: 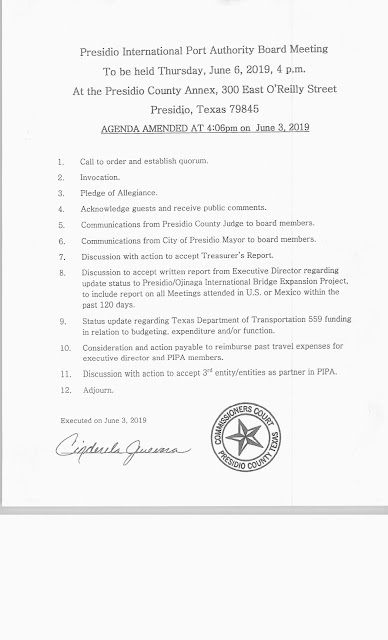 Posted by David Beebe at 1:46 PM No comments: