Well, it's late January, and after a hectic Christmas plus another week back to Houston (last week) to wrap up some 2007 business, work on some Padre's business, and retrieve some more Houston items I am back here and in work mode.

It's been a long time since I posted up, and even longer since I took and posted pictures. I'll try to update the pictures of the whole grounds over the next few days.

Recent news here at the funeral home/dancehall includes that I successfully installed the new power pole and had it hooked up by AEP. So now we have 200 Amps of clean, grounded power and power wired in completely in the office, bathrooms, workshop and most of the game room. Next is band green room and private bath and the kitchen. After that I have to wait until the main showroom roof project has been finished. News on that is none. It hasn't yet started, still, but is scheduled for about 2 weeks from now. Other news is that I have moved the office stuff into the office, along with my record collection and the full-sized bed for guests and sometimes me. The office is very comfortable- definitely the best I've ever had as far as layout and space. The cedar walls are great- I enjoy it in there. Soon I will be moving another large desk and a smaller one into there so as to have the full computer system, printers, scanners et al set up in a non-confusing manner. The bed will leave. Hopefully I'll find another super cheap Airstream by then to use as a guest house and the bed can migrate to there. 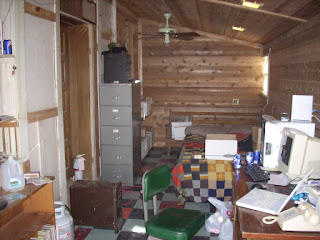 The workshop is now workable, so in the next few days I'm going to eliminate all non-workshop related items from the room and move all the tools into there. Both workbenches are set up and the washer and dryer are in place. Once the plumber runs the washer lines the room will be completely finished. As for the game room, it's still basically a catch-all for materials and appliances. I'll be moving the kitchen items into the kitchen area as soon as I can and will start work on refinishing the long shuffleboard table. As for the backyard, that is also a staging area for work and now has a nice copper and pewter fountain that will live there. It's still on the trailer from Houston, but here's a pic nonetheless. The price was right- free- and actually the thing is pretty cool. 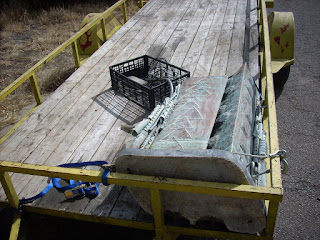 Our TABC notification poster is in the window facing Abbott street now. We'll see if anyone calls. The minimum posting time is 60 days, but I'm certain we won't be open before June, so it will be up longer. It basically stays up until you are ready to serve and have jumped through all the TABC hoops. So far that process has been straightforward, but we are in the early stages. 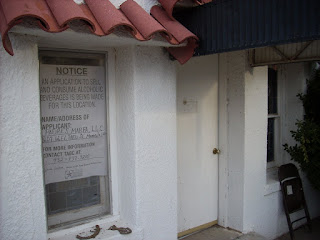 On this last trip back to Houston I was able to stop in Austin and raid the State Surplus Sale for office file cabinets (giant and heavy), telephones (sturdy SW Bell ringing bell touch tone style), and enough Hunter ceiling fans for the whole place with a few spare for parts, blades and replacement. Small fans were $10 apiece and the full size were $20 apiece. They're all white with white blades, so they'll be painted. White fans look dirty instantly and I think they're kind of ugly to begin with. These are all made in Memphis and are the cast-iron oil filled well style. Retail on these is now over $260 each for wither the big or the small and theya re now made in Taiwan with fewer copper wrappings (to achieve "Energy Star" ratings) and therefore less powerful and durable than these little monsters. Here are two pics of the fans laying out in yard on their sides. That's to drain the old, dirty oil before I paint all the housings black. Blades will be painted brown with black blade arms. That's at least for the big fans for the main room and the little fans for the game room over the shuffleboards. I'll post pics when they are completed. It's so nice here at night during the summer that I think we'll rarely be running the A/C since we'll have all these fans. 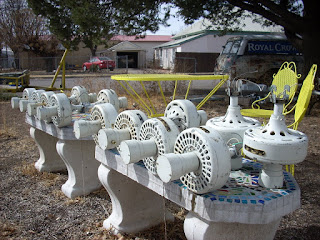 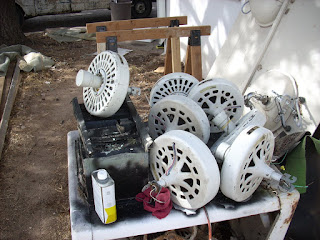 In David Beebe wirth regard to community news, I gave my second one hour drum lesson to 7 1/2 year old Felix Benton today, som of Joey Benton and Maiya Keck. Those folks own and operate Maiya's restaurant and the new Get Go healthy grocery store here, among other things. I receive an $80/month tradeout at the Get Go for giving a lesson every two weeks. The kid is good, especially for his age. We are working on basic beats and I made him a disc today with notes of 9 tracks that feature great and usable drum beats. Nothing complex (like no Beatles' "Ticket to Ride") but good, basic stuff. Like the following: Archie Bell & the Drells' "Tighten Up" - basic FUNK beat; Chuck Berry's "Johnny B. Goode"- basic rock and roll swing beat; Z.Z. Top's "Gimme All Your Lovin"- straight as an arrow ROCK beat (played by a computer, thanks to Billy Gibbons, but great anyway- truly great).
There was more, including The El Orbits' version of "Night and Day" (straight beat with high hat accents). Anyway, we're focusing as much on listening as on playing. Once he graduates from me in a few years he'll surely take from a drum teacher who is low on listening and high on form.
My firstCity of Marfa Board of Adjustments meeting as a voting member was two weeks ago. We approved a special use permit for a gentleman building a house on his property. Basically, we gave him permission to live in a trailer home until his house is finished with a maximum of 18 months time. It was interesting.
It looks like for the first time in my life I'll be registering as a party member on any side in order to vote in the local primary. This place is so small it could actually truly make a difference.
I have a few gigs coming up out here as the bassist for a guy named Jon Langford who is coming through. Much to my delight, his music is great. It's like Irish rock with a slight bit of Joe Strummer in it. This guy is one of the longest=standing artists on Bloodshot Records, a great label. I am looking forward to the shows. I'm on bass. This comes as a result of the Barbara Lynn gig and also Jackie Pepper.
I guess that's about all for now. tomorrow is a very busy day- mostly administrative, banking, TABC, etc so it could be eventful. Later- David
Posted by David Beebe at 8:09 PM