I recently joined the Marfa Rotary Club. So far it has been fun and reminds me of the great times and good service work we accoplished in Key Club (sponsored by Kiwanis) at Lamar High School. My Key Club experience was a blast; Michael Sklar was the president and Ralph Coatsworth was the VP. Michael put me de facto in charge of the Buffalo Bayou cleanup project, as I have always been in love with the banks of the muddy ditch and still jog on the trails to this day when I can. Most of our Key Club activities that didn't involve us getting dirty cleaning the bayou were dinners and appearances helping Kiwanis members with their service. Our weekly meetings at Allbrittons cafeteria on Holcombe were an occasion for the loudest plaid sportcoast and ties we could find (coat and tie was alwasy required) and big cigars. Oftentimes there was a beer or two consumed somewhere, despite our being in high school. Overall, it was a great time and we actually did do some great work.
All that being said, when I found out Rotary was meeting across the street at Jon Johnson's BBQ hut "tipikiva" I decided to give it a shot.
Marfa Rotary is undergoing a transition from the old line to the younger. This is a good thing, as service groups and organizations such as the Masons, Elks and others are folding left and right due to the passing of the last active generations ofmembership. Marfa has already recently lost the Lions Club and the Amvets (although the amvets members are still together, they are no longer chartered). The Rotary Club is the last nationally affiliated community service organization here.
As I mentioned before, many of the newer members are younger than I and the enthusiasm is alive and well. Sunday the 6th we hosted a charity Bingo event at the former AMEVTS Hall here in Marfa, a grand old dame of a building that has seen better days, but is still a great asset. Our actual Bingo event was prefaced by a few weeks of making posters and collection donations from local businesses in Ft Davis, Marfa and Alpine. I personally collected some really good prizes (all donated) from Morrison's True Value in Alpine (where I spend a ton of money, by the way), Beall's, Trans-Pecos Guitars, Sonic, and a few more spots. Like always, the folks of West Texas are gracious and generous. We really had an incredible selection of prizes and the donors will all be honored at the presentation of the scholarships we'll be giving away at Marfa HS graduation. 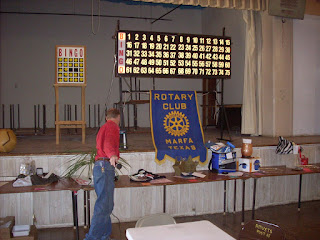 Our day began shortly after Noon as we met up at the Amvets Hall to set up tables, chairs, prepare hamburger fixings, ice down sodas, set up the Bingo machine and put out prizes. Our Bingo was to officially begin at two o'clock, but attendance was light at 2, so we waited about another 20 minutes and, sure enough, the room began to fill. We sold excellent hamburgers from the snack bar (cooked on an ancient and excellent griddle in the Amvets kitchen) and also had chips, sodas and veggie burgers for sale. I brought some beer to give away to folks who wanted it (volunteers and some locals I coerced into coming to play with the promise of free beer) since we couldn't sell it. All in all it was a fun time. I wound up eating three burgers over the course of the day because they were so darn good! I made a few new friends including a young Marfan named Paul who promised to "friend me" on myspace and even some out of town Bingo players. I got to play a few cards myself, since I purchased some, but then gave them up to a friend as I was needed to take burger orders and then to deliver food to tables so the players wouldn't have to get up during the games. 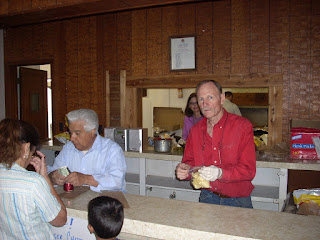 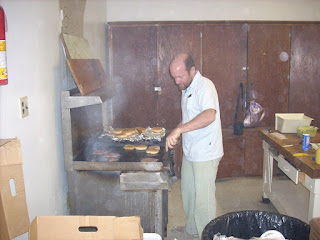 
By six P.M we had packed up and cleaned the hall. All tables and chairs put up, kitchen scrubbed, cards put away, prizes districuted. Jon and I went back to Adobe Moon BBQ to count the proceeds and thankfully we netted $984.00 after expenses- only $16 shy of our goal and enough to fund two scholarships for MHS students! 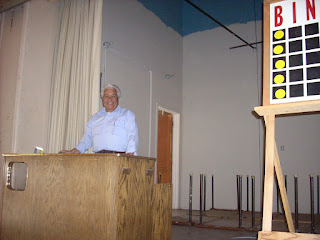 
Here's what I love about events like this- everyone who came had a good time, I believe. There were great prizes and the games we re really a hack of a value. The volunteers had fun. It was for a good cause. It was a family-oriented event and an event that included a diverse group of Marfans. All these reasons make this a win-win for our community, our organization, and the students who will benefit. And even better is that from the sponsors to the volunteers to the Bingo payers themseleves, everybidy played a part in the success. That is a great thing. And that is why I love this type of event.
Posted by David Beebe at 10:20 PM

David -
I am beyond thrilled that you are running for Marfa City Council. Marfa needs a dedicated, forward thinking, worldly person like you to guide an already incredible town into its next phase of fiscal responsibility and prosperity.
Spending much time in Marfa as a child I want Marfa to grow, embrace all it can be, and allow its history to remain a special part of all that it is today. I know and trust that your love of Marfa encompasses all of these aspects.
I do miss you at Casbeer's but understand that your place is making a huge difference in Marfa. Marfa and Moon Pies sound so great together! I see a new campaign slogan in the making...