Letters from inmates at Lynaugh regarding Marfa Public Radio show

This post is not about local policy or politics, but relates to a function of my role as Justice of the Peace and also of my role as a DJ on Marfa Public Radio for the Tuesday night "Night Train Express" R&B/Southern Soul show I have been hosting for eight years.

The show runs three hours on Marfa Public Radio and also on repeaters including West Texas Public Radio in Odessa. The radio tower for Marfa Radio is located on a high peak in Jeff Davis County, near the McDonald Observatory. The height of the tower gives it a very long reach, as FM radio is what they refer to as "line of sight" which is sort of true if you were to discount the curvature of the earth. The Marfa signal reaches all the way to Fort Stockton, where a large TDCJ prison called the Lynaugh Unit is operated. This unit houses over 1000 prisoners, most of whom are serving time for serious offenses.

In my job as magistrate for northern Presidio County, I visit the Presidio County Jail nearly daily to read people their charges, rights and set their bond amounts. Of course I get to see all types of people in there for all types of offenses. Jail, even when it is like our jail here in Marfa (clean, good food, respectful staff) is a miserable place to be. Prison is worse, as it is long-term, and inherently more brutal.

About 2 years ago a prisoner named Paul had been listening to my show (10 PM to 1 AM every Tuesday) on his headphones (they are permitted at night for prisoners who have consistently good behavior) and began to relay requests through his fiancee Deb via the telephone (about $5/minute at most jails in TX). Deb began emailing me the songs each week and Paul started to collect additional requests from his friends. Within a few months I was receiving a lot of positive feedback through Deb and Paul.

Once Paul was finally released from Lynaugh earlier this year there was concern as to whether anyone from there was going to be able to get requests to me, as by this time, according to Deb, most of the prisoners in the entire facility were going to their cells by ten each Tuesday to listen to the Night Train. I decided to broadcast my P.O. Box over the air a few times, knowing that inmates are permitted to write letters. All letters are opened by jail staff and reviewed. The letters are either forwarded with a slip saying they have been reviewed, or are not forwarded at all. I have no idea how many letters may not have made it to me since they began showing up in my mailbox, but I tend to receive 3-5 letters a week, mostly from the same gentlemen.

I try to play as many of the requests as I can within a three hour show, and sometimes I can get through most of them. Other times I have trouble finding some of the tracks, and I also cannot play songs that have curse words in them, so some don't make the cut in that regard.

I wanted to share these letters with everyone, as I believe the letters to be an amazing representation of humanity and how the little things in life can really make a difference. Of course, I am very grateful that these men have enjoyed the radio show so much that they look forward to it every week as a highlight. I also am displaying these letters to demonstrate the loneliness of prison; a place nobody wants to be.

I have redacted the names of the inmates and anyone else mentioned who is not a performing artist. Although many of these guys really appreciate a shout-out over the airwaves, it's not necessary to memorialize their identities in this context.

Today I am posting most of the letters I received in March of 2016. I would like to note several very impressive qualities of this correspondence.
Note the exacting, artistic handwriting and care taken in crafting these letters. It's really great, I think...
Also, for anyone who knows much about classic R&B, soul and related genres, the caliber of the song requests is way up there. Most of these tunes are somewhat obscure with regard to the songs that are played over and over again on current commercial radio. These guys are digging deep into their own personal memory banks to pick some really great lost classics. Such is the beauty of Public Radio, specifically Marfa Public Radio, that I am able to play whatever I want on my show.

Here are nine letters from March. I hope you enjoy them. -DB
PLEASE CLICK ON THE SCANS TO READ THEM ALL WITHOUT MARGIN INTERRUPTION- I wanted them to be large enough to be readable but the Blogger site cuts them off slightly here- apologies... 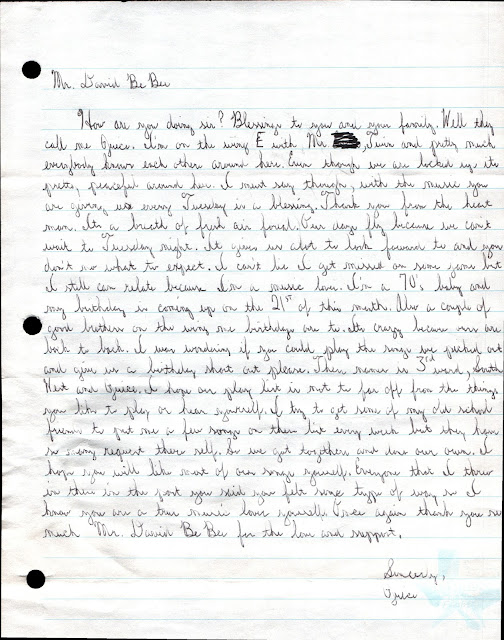 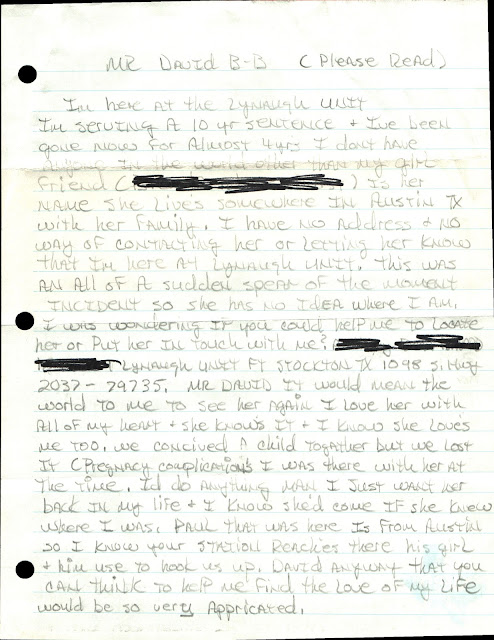 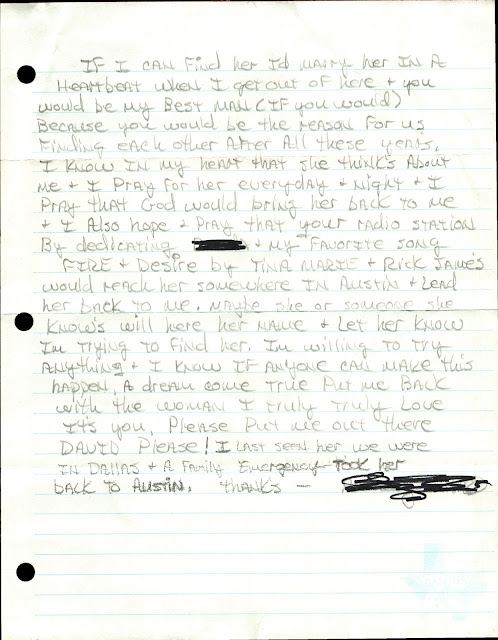 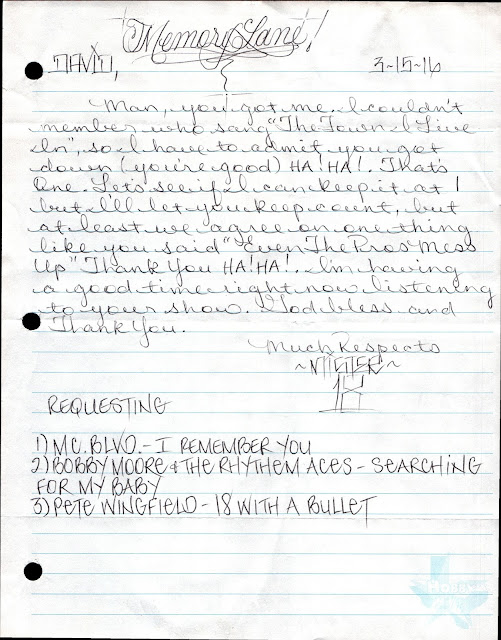 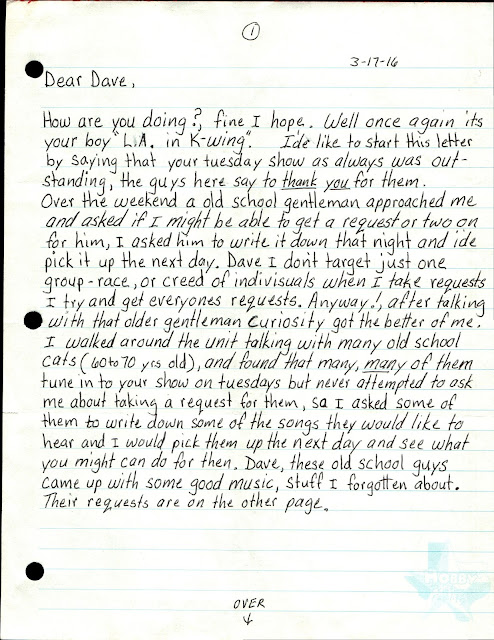 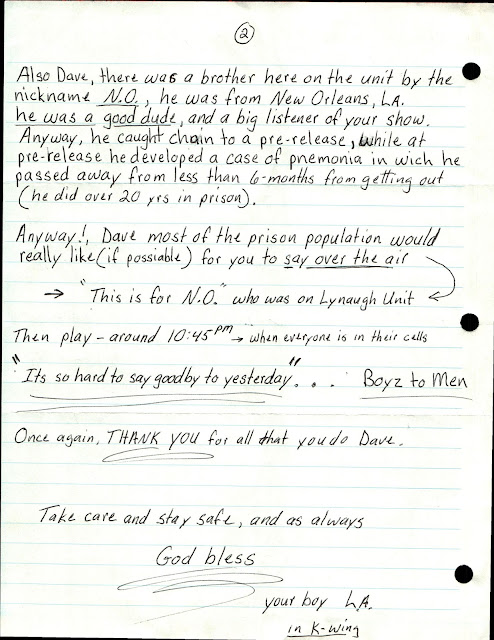 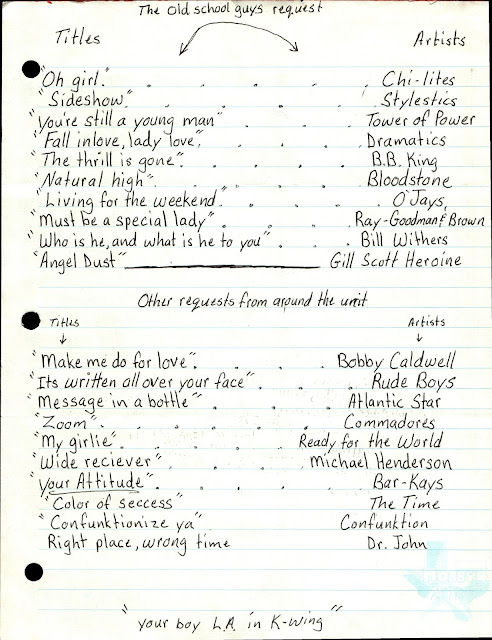 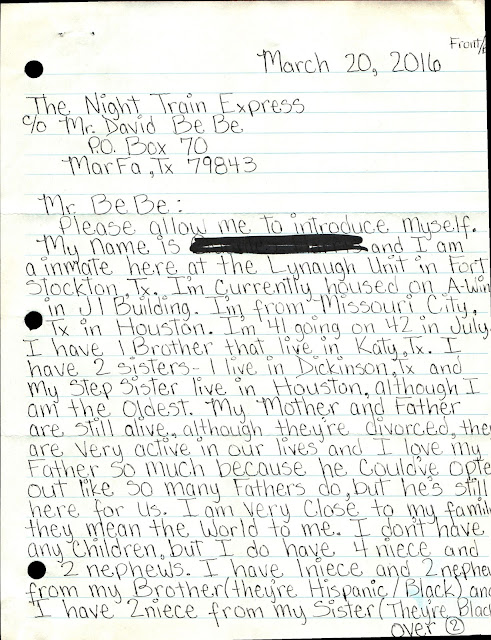 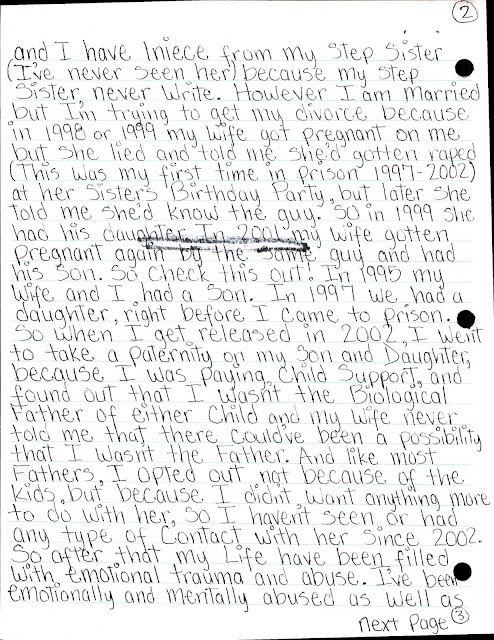 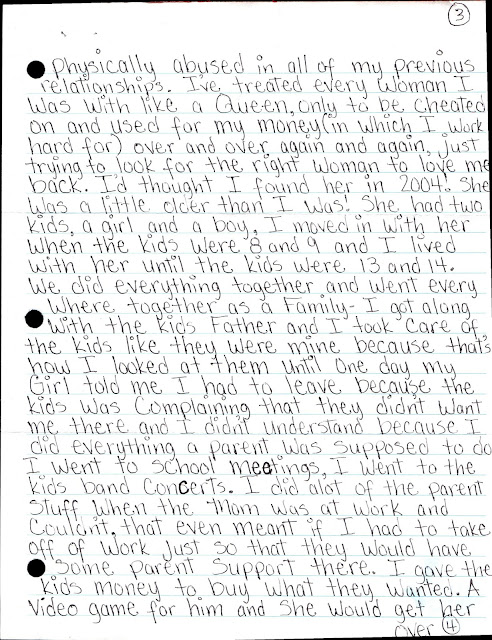 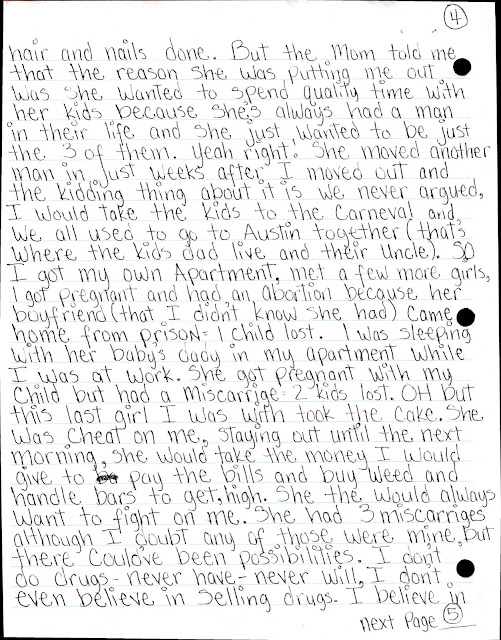 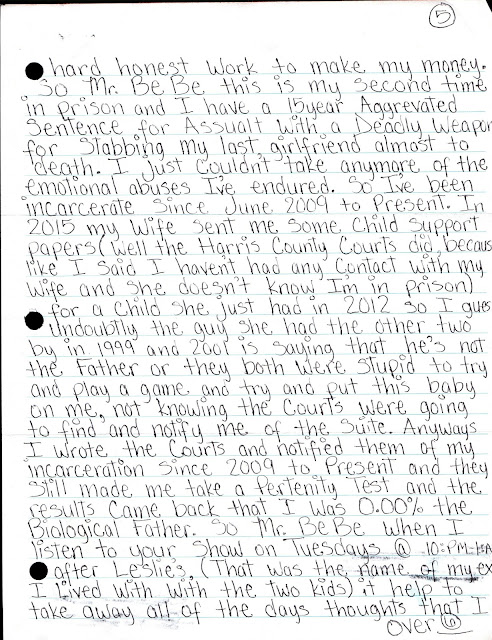 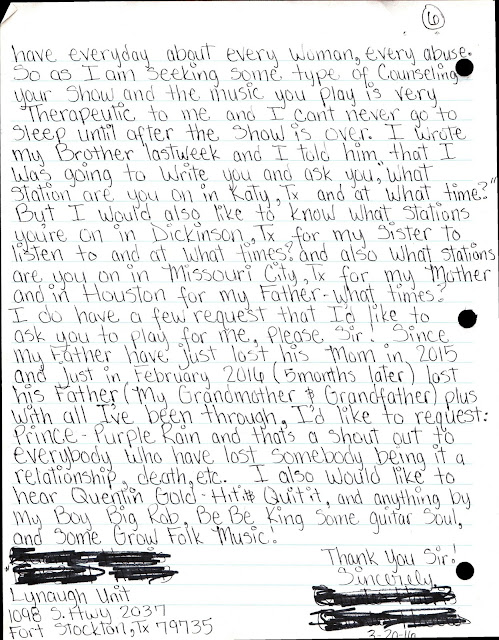 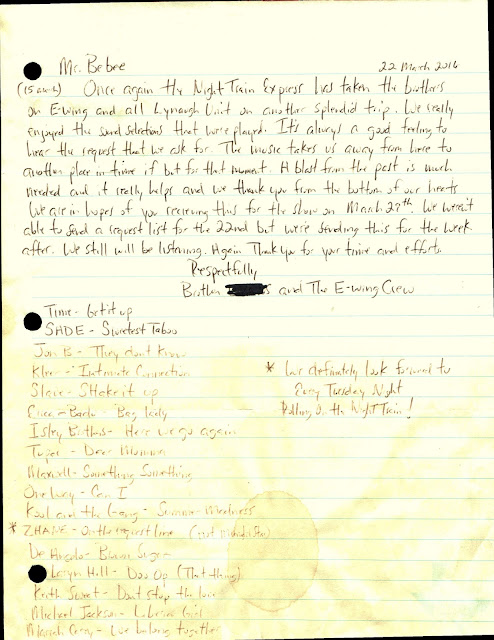 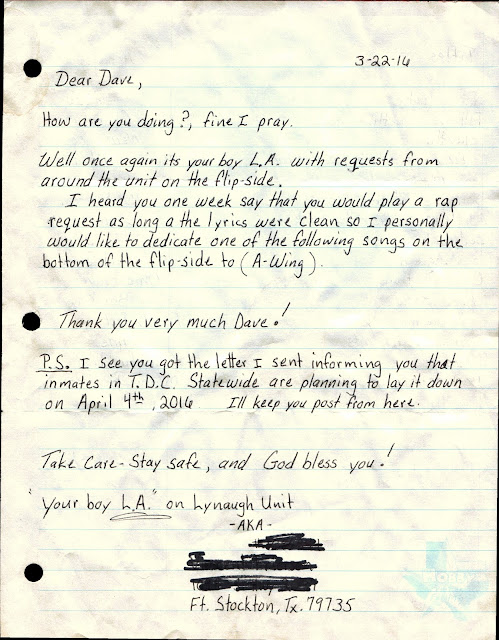 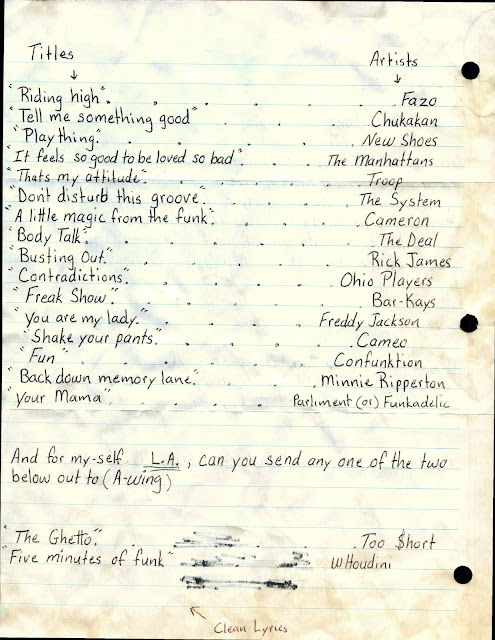