Click on any photograph for a full page view.

OK, so it's been about a month since I went on this great all day walk with John Lomax. However, I haven't yet read his re-cap and, for several reasons, couldn't get my pics in hand, then connected to the computer for a while and then Roller Derby and SXSW came up. So, partially because I really want to write about this walk and partially because I really want to read John's blog article I'm going to head on and write this baby. Devin the Dude is on my jam box right now, conjuring up visions of H-Town. K-Rino's " Book Number 7" is next in the changer, so I should be more or less set in getting that Houston Hobby Airport hood vibe.
All in all, here's what we set out to do. Get onto the Fuqua/South Point Park and ride Metro early (last bus out is 7:35 AM) and take until it ends. Walk back to downtown using a more pedestrian friendly route than back up the Gulf Freeway feeder.

I woke up at about 6:30 in the morning after arriving into Houston from Marfa the evening before. This trip to Houston was the return trip from dragging a box truck full of pinball machines, office supplies, personal stuff and a jukebox to Marfa from Houston. A reliable box truck is not available for anything but local retals in Marfa so I got a PV from Houston. Anyway, I got on the light rail at the Ensemble/Houston Continental Club stop and went down to the TMC transit center, the pick up point for the bus out to "South Point" I got there about 7:15- early for a bus that was supposed to leave at 7:35. John Lomax was taking his own bus over to there and got there about 7:25- about 2 minutes before our commuter bus showed up. After paying the fare (no more day passes for Metro- boo!) we got on and the bus proceeded to leave outbound about 8 minutes early! That's the last bus out until the evening, a change from the old days when Metro would run the commuter buses once every hour to hour and a half or so during off-peak. Surely there's a compromise between the two extremes- like switch the commuter bus to a more local schedule during off-peak and serve a larger area?! Lord knows. I still love Metro, though. 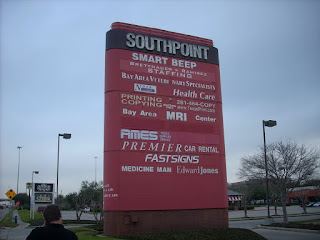 We get out to the South Point Park and Ride and it's clear we are in blue collar/white collar suburban hell. It's not clear to me exactly what "South Point" is other than a collection of industrial warehouse complexes, small to medium size offices (see Greenspoint), closed down movie theaters, and chain restaurants. Clearly it's based around I-45, which is a block north of the South Point Park and Ride. As far as distance from central Houston, South Point is just past the Pasadena city limits and, to my knowldege, the areas directly further than where we were at are basically NASA Rd 1, Clear Lake, Friendswood, etc. 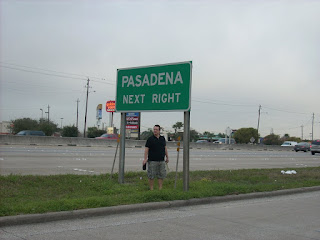 John and I trudged back towards the freeway we rode in on, trying to get our bearings and a game plan for returning to H-Town proper. after passing a few more chain restaurants (think-Woodlands) and some groundwater detention ponds (with wildlife all around the trash floating in them!) we opted to take Almeda Genoa Rd southwest towards Hobby Airport. John wanted to walk Broadway from Hobby back up towards 45 and I was game.

Almeda Genoa turned out to be a great road to walk, strictly for the rural farm road/ urban funk factor. The souht side of the Gulf Freeway and Almeda Genoa features an old scholl Arby's, Pancho's and a beat up General Joe's Chopstix. This seediness would prelude our exiting the commuter I-45 corridor and our entry into a very old area of town that is partially in transition.

As we progressed southwesterly down Almeda Genoa the businesses grew further apart and rural vacant lots, some with farm animals, others merely overgrown became occasionally bookended by skinny housing developments of surely the sub-prime mortgage type. The Ramirez realtor/homebuilder/development company controls much of this land. Finally it was time for John to grab a small wine and for me to get a cold RC Cola at this little convenience store that sells pretty much whatever the owner finds. I liked the book section. 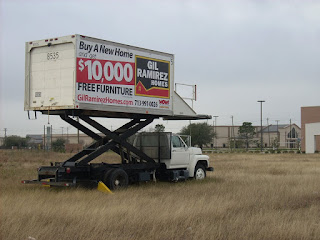 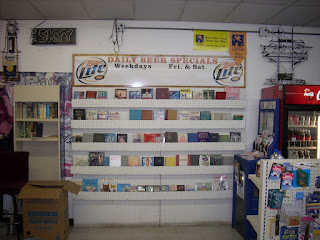 After a ways we approach a country style ice house called the Juke Box Lounge. Yes, it's open, despite the fact that it's not even 10 AM. I order an O'Doul's from the cigarette-aged but very friendly female bartener. The doors are open on the place and both folks in there are smoking, despite Houston's smoking ban.Oh yeah, we're not actually in Houston, or are we? I can't remember, but I think we were in unincorporated Harris County. The Juke Box Lounge has been open for only about 25 years, but looks like it has been there forever. The brews are cold and the seating is comfortable. Great mostly country records are glued to the ceiling tiles. Billy Joe Royal, Kenny Rogers, George Jones, Andy Kim.
We stay for a while- the CD jukeblox is broken and the maintenace guy is trying to fix it. We leave and are kindly asked to come back any time. 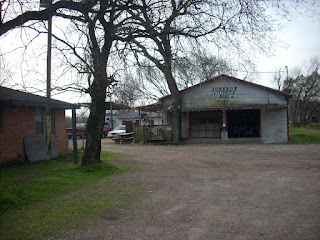 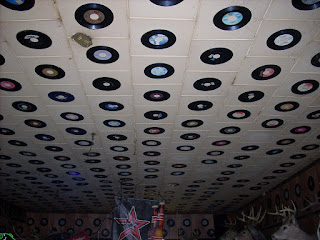 Almost across the street is a part-time flea market at the corner of Almeda Genoa dn Radio Rd. It's closed, of course, before Noon on a Friday morning, but there's a bicycle repairman/shop open in one of the cubbbies. I paint a smile on the female figure on the sign, who has no mouth. 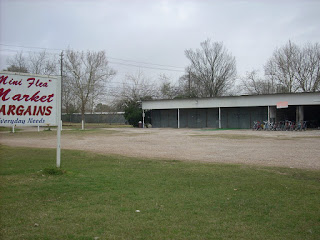 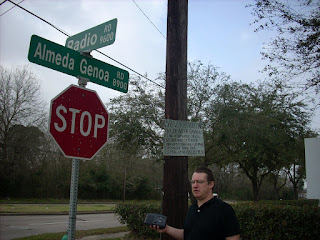 Almeda Genea more or less takes you to far-out Telephone Road. This is our plan- to get over to Telephone and then head around Hobby Airport and then backtrack a bit to get to Broadway. This is a along walk just to get to Broadway. We are walking entirely around the Hobby Airport complex and the we'll be at the entrance to Hobby.
Meanwhile, back on Almeda Genoa, I stop at a little bagel and donut shop next to Shuttle Burgers for some coffee and a donut. The Vietnamese lady at the donut shop is amused by my dollar coin. SHe is also very nice and I am ecstatic that they sell RC Cola in the can! I buy two and thank the lady for carrying RC. She says she has a couple of customers who buy it every time they come in. It's nice to know I'm not the last one flying the Royal Crown banner, especially out here in the boonies (which is what this is). 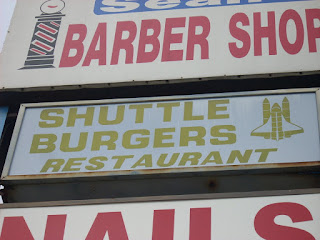 Next stop, the Windmill Bar. They open at 11 and we arrive at 11. It's hard to believe we've already spent three and a half hours on this trip; it certainly doesn't seem like it. The Windmill Bar is a comfortable, more clean and modern ice house than the Juke Box. Smoking is only permitted since the doors are opne. We are in the COH and the bartender explains that they are considered "open air" since the front is lined with industrial garage doors. The reading material at the bar is a strip club advertising newspaper, featuring the "best" of Houston's escort services and strip joints, plus some remarkable "columns" taken straight from press releases from the Ford Motor Company (Mustang article) and some sketchy supplement (Nutrition column). John talked at length to the bartender and she was extremely nice. The weather was turning a little sour by this point- kind of cold and drizzly, but after Long Point this was nothing, nothing at all. 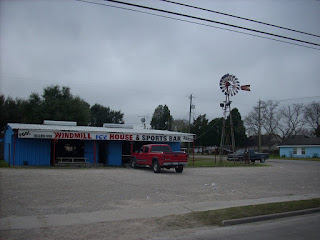 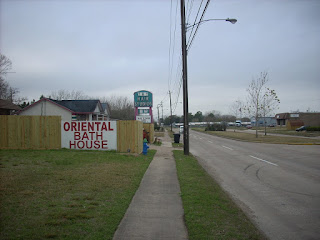 We are approaching the Telephone Road and A/G junction. There's an old barn looking building next door to a cemetary and we go in. It's lightly raining and the big building is under partial de-construction. Despite this, pews are stacked up in one room and there's a smattering of dirty and obslete office supplies in another. It's clear that this was , at one point, a funeral home and possibly also a church. Why it's in the shape it's currently in is akind of a mystery. No sign of crack usage, a few things that could be sold for $5 or maybe more. I guess we're too far out for urban drugworm raiding. We don't seem that far out to me.
The intersection of Telephone and Wayside is busy. Two convenience stores, but more rural looking than the Telephone Road we had already sen on our Telephone walk. We are out pretty far beyond Loop 610. Closer to the Beltway than 610, I am sure. 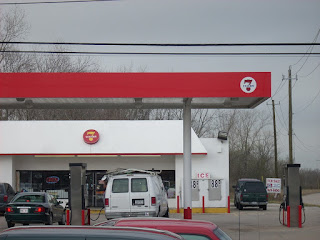 Telephone, as state HWY 35, has no city of Houston maintained sidewalks. Once again, we get to experience the treacherous walking that is to walk down outer Telephone Road. Sink holes, overgrown grass, no sidewalks, skinny easements. I guess TXDOT is supposed to take care of this. TXDOT can be counted on to promote only car travel and definitely not rail, bike or pedestrain traffic. We walk for quite some time and around the south west side of Hobby Airport. Street names like Braniff appear. Finally, once we get past the tall, seemingly never ending razor wire topped cyclone fences lining the airport and its operations we're back in the hood. 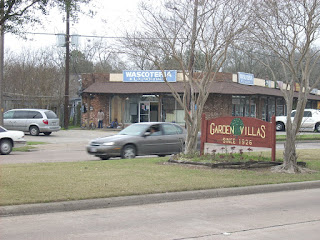 This is the hood right outside Hobby. Broadway, Telephone, Park Place. It felt good, and then got better as we stuck to Telephone and the residential area between Telephone and Broadway for a while. Great lawns, Brady Bunch style houses, Small suburban houses, working class folks, artists. One of the last truly honest and diverse pretty NICE areas in Houston that's surely still affordabel, thanks to the double stigma of "living near Hobby" and being on the edge of Sunnyside. 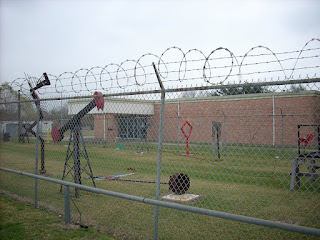 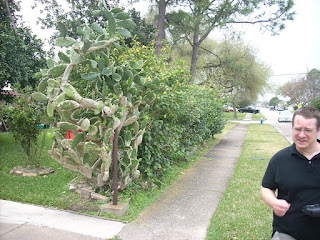 John Lomax and a fine cactus tree in a front yard.

Once we make the cross-neighborhood trek to Broadway we are set for the semi-direct walk back into Downtown Houston. Where we stand (at Pay at the Pump Fried Chicken) we are about three blocks north of the entrance to Hobby, just before the center of the road flyover ramp. The tress throughout this neighborhood are mature and beautiful. They are, for the most part, oaks. This is a big difference between the Harold Farb pioneered Hobby Airport area and the Frank Sharp designed Sharpstown. If Shapr had been as pro-active about tree planting his nighborhood would look more like this. The architecture and age is about the same. 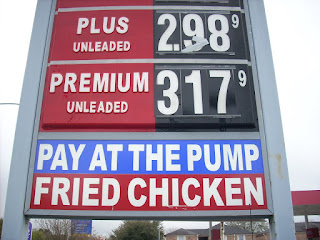