I've been busy working in the band room installing the sub-wall over the adobe. The beadboard paneling will go on top of the sub-wall. The adobe walls, even those covered with plaster, are not even close to straight- vertically or horizontally. Building the sub-wall structure is an effort to straighten out the surface so that the paneiling will be straight. Basically, I build off the floor and ceiling, and use a plumb line to get the wall straight. It's an imperfect science, but as Al Smith (from Airline Motor Repair) says, "This ain't no zero tolerance job!"> Anyway, I have finished all but the adobe wall facing the stage, whihc I will do later since the shelving/electric lines, etc for it are still undetermined. I may dive into it before refinishing the floor (at the time I install the band room electric) just to get the whole place done on my watch and sealed off from the main room construction.
Interesting existing door frames- 30 inches. I guess I'll just take some of these old solid doors to the table saw and trim. This is back of house, so it won't be handicapped accessible- there's no room to modify it as it is.
Eric Feighl came to town Thursday. He was in Midland on business and drove a rental car down here to check it out and spend the night in the club building. I showed him the basics of Marfa and gave him the toru of the whole place. We then went over to Maiya's restaurant where he got a drink and I got a non-alcoholic beer. That was the first of many stops. This girl named Romi (don't know the last name) had an art showing at the coffee roasting plant (formerly Pierce Chevrolet). Her art's subject matter was based around domestic violence. She had worked in the domestic violence unit at Dallas' Parkland hospital. Anyway, her work was good and the venue, in my opinion, was excellent. Bev and Johnny showed up with a portable fire pit for the parking lot to complement the free food and beer. 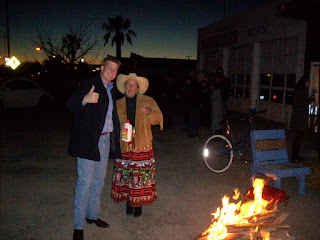 Next we went over to Tillie Arts for another Marfa Big Read event. This was a real deal Mexican food pot luck dinner with a three piece Ranchera group playing. Great, great food and State Rep Pete Gallego showed up and spoke. 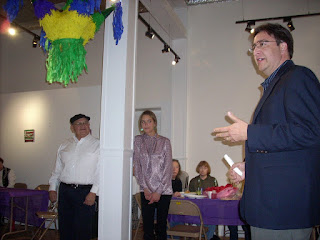 Honor students from Marfa High and Middle Schools also did some readings for the group. All in all, a majorly successful community event for a Thursday night.
Eric and I headed back to Maiya's for another drink for him and non-alcoholic beer for me (I forgot that none of the convenience stores in Marfa sells O'Doul's or any other NA- so the next day I went to Pueblo Mart and bought the 2 six packs they had.)
We ended up the night at the Thunderbird Lounge and despite vowing that we wouldn't close it down, we did. 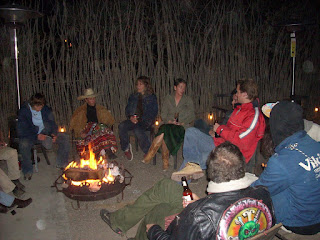 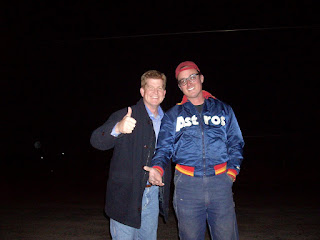 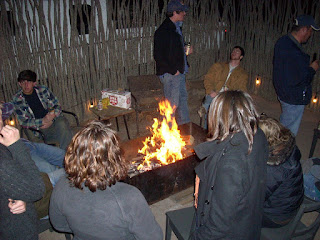 Earlier I had a Rockstar pomegranate drink. It had been so long since I had one that it wired me up; however, by midnight I could barely keep my eyes opne. That is, until I actually got in bed. Worst sleep I've had in months. Tossin' and turnin' like Allen Hill singing the Bobby Freeman song of the same name.
By the time I got up (8:30 AM) the next day Eric was long gone. His plane left Midland at 9:30 so he was out of here by 6:30.

Since it's basically still just me plugging away at the place I decided to clean the game room/work area up a bit. One way to do that is to get everything off the floor. Anyway, I have mostly succeeded and now we have ceiling fans hanging everywhere, the electric supplies are all segregated by class and use, and I got some more of the plumbing fixtures out into the yard. Now there's enough room to use the table saw with a full sheet of plywood without a problem. I had been using the table saw only in the outdoor garage area.
My New Year's Resolution/Lenten promise not to curse is going pretty durn well. I have caught myself, of course, but I think I can maintain a better method of speaking following Lent for the long term. That would be optimal. Quitting drinking is easy, but it definitely ups my coffee intake by a factor of about two. Thank goodness we have the best coffee anywhere here in the form of Big Bend Coffee Roasters. Believe it or not, it's available in Houston at the new place on 8th and Studewood, Antidote. Czech it.
I have a Baord of Adjustments (City of Marfa) meeting tomorrow and then I'm going to try to blaze it towars Houston in the Mercedes. It'll have to have a new battery first and it will also have to NOT be raining, since I'm missing the driver's side window. This trip back to H-town is for a doctor's appointment, a walk with John Lomax, a meeting with the Banana Blender accountant, and to move out of the big room of my apartment. Those are the non-primary reasons. The big deal is to get a box truck and load all the pinballs, video and whatever else I can get from Continental. I'll bring it back out here, drop it off, and blaze back to H-Town. By then the theory is that the Mercedes will be fixed (window and brights for inspection -it's a steering column problem) and I can drive it back out here. Rumor has it that once I get the car in inspectable condition there's a cat in Alpine who is good with the old diesels and will work on the older Benz models. That would be nice.
Once I get back, Father Bill Miller will be hot on my heels getting out here. I really want/need him to NOT hang out with the social crowd while he's here. What I really need is for him to help me move some big items around, stay in the funeral home itself, and, most importantly, hang out with full-time local people doing regular things. It will really help all of us for each of us to have an understanding of what Marfa is really like on a day to day basis (when it's not party time.) Also, we need to go to Mexico and get some items for this place.
OK, outta hare- time for Airstream - David
Posted by David Beebe at 9:39 PM