Adam and I went (just us two) to play Super Bingo at the American Legion Hall in Alpine. I was told by Phil Westerman (the bar manager) that the earlybird Bingo starts at 6 PM, so we were sure not to be late. Well, it turns out that they don't even start selling the cards until about 6:25, so we were early. 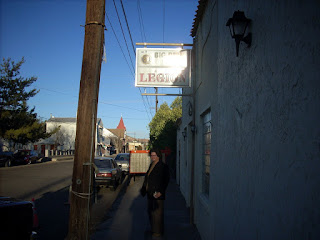 We were not let down by the promise of free draft Miller Lite with thepurchase of the Bingo cards ($20). Since we were early, we took a game of shufffleboard on their old school full-size shuffleboard table (I think it's a National). I have never played a shuffleboard that difficult in my life. Phil told us that they recently had it refinished for the first time in many, many years and they took the top to the Sul Ross woodshop, which has a giant planer to have it planed. Anyway, it should be perfectly straight, but to me it's badly crowned. Keeping the weights from falling off the side of the table was nearly impossible! Anyway, the game quickly degenrated into nothing but laghter as we usually were both scoreless after many rounds. Finally, after playing for about 20 minutes we stopped (since Bingo was starting) with a score of 8-2. Hilarious! 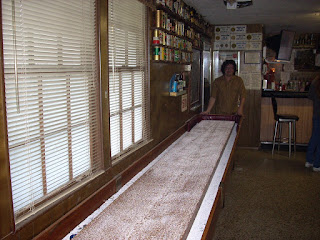 Oh yes, and also beside the shuffleboard table was an extremely nice display of "Alpine" brand beers on a shelf. The whole place has an extensive beer can collection, including one I have never seen before- "Padre" beer. Great looking can- I'll have to steal that logo for something. I can't believe I didn't get a pic of that, but it's not going anywhere. Notice also in the picture (click to supersize) the "Operation Desert Storm" clock. This is the American Legion Hall, after all. 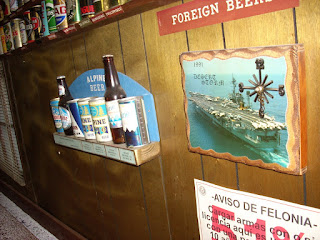 Bingo started and I would say there were probably about 70 people playing. Definitely pros- and we are not. The older lady sitting next to me finally got sick of seeing us not know exactly what we were dong and began to tutor us. Games we played incldued the "Crazy Kite", "Indian Star", "6 Pack (no free space)", "9 Pack", "Double Bingo", "Blackout" and the "Picture Frame". of course, neither Adam nor I won anything othe than the beers we drank. I would call that a bargain.
Everyone was nice. We were among the youngest crowd in attendance, and I would say the crowd is about 75% hispanic and about 70% women. 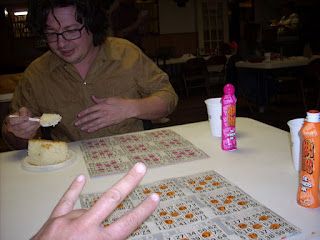 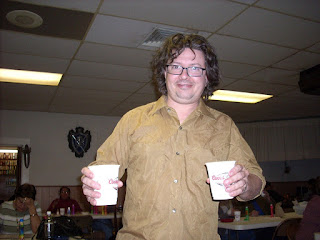 Once Bingo was over it was clear the hall was closed for business, so we got out of there, but not before using the bathroom, where, for the first time ever, I saw a "urinal target" in the old-school trough (of COURSE they have a trough at the AM Legion Hall!- Kudos to that!) Yes, "Hanoi Jane" is in the house. Pretty great. 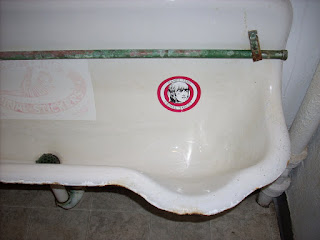 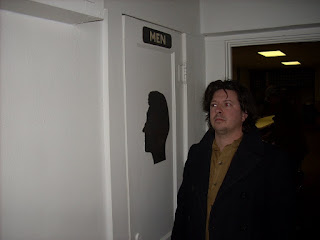 Adam in front of the men's room door.

Adam and I decided to catch a game of pool or two at Railroad Blues before heading home to Marfa. it was Mardi Gras, so the place was pretty rocking. 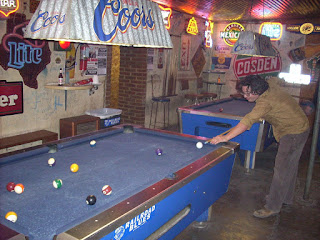 We played a game alone and then were challenged to doubles by two guys from out of town. Several games later, with all of us playing pretty poorly but having fun, we decided it was time to go home. I got home about 11:40 and pretty much went straight to bed after checking email. And that was basically it! A happy Mardi Gras.
Posted by David Beebe at 9:13 PM