Tonight is Mardi Gras, my last day of drinking (in the U.S. at least) until Easter. This has been a yearly tradition for me since Satellite Lounge days over ten years ago and I only skipped it once. That was the year I was recovering from heart failure, so I wasn't really drinking anyway.
Adam Bork and I will be attending the monthly American Legion "Super Bingo" at the Legion Hall (Post 74) in downtown Alpine. The deal is this: for $20 you get to play the full card and drink as much Miller Lite draft as you want. $2500 in prizes are given away. They also have shuffleboard there.
They do Bingo every Thursday for lower buy-in and lower prize values, but Super Bingo Tuesday just happnes to fall tonight. Anyway, I am pumped. I met the bar manager here at the Padre's building when he strolled in while I was working the other day to try to sell me extermination services. His name is Phil Westerman. Anyway, we had a nice conversation and he filled me in on the Bingo deal when I asked about the Legion Hall. I'll take pictures tonight if they allow it.
Speaking of pictures, I have a few of the funeral home/club in it's near current state. I took the pics a few days ago and have since achieved a lot, especially reagarding getting the place better organized and cleaned up, but here they are. 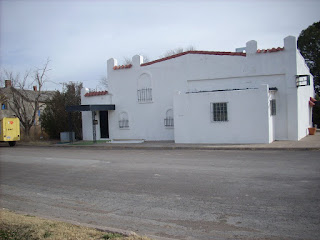 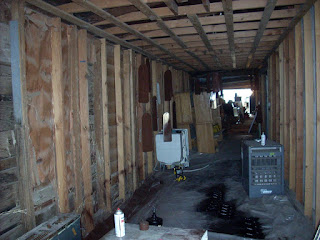 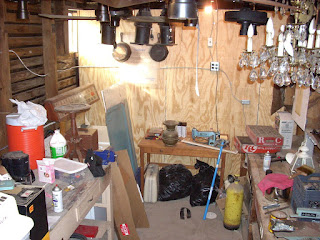 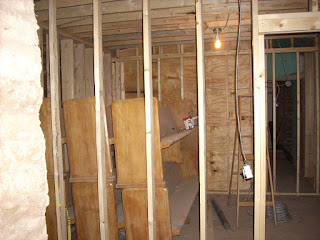 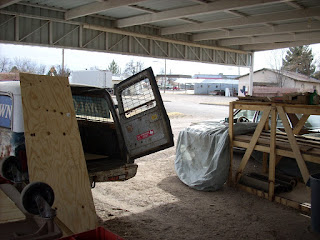 Basically, most of these shots don't do a very good job of showing you how things fit into place. Perhaps at some point I'll do a complete walk-through and paste things together with a narrative to boot.
There are no additional pictures here of the main room since there has yet to be recent progress on that front. I am still waiting on the new roof structure. The longer I wait, the further out our opening date is (but the funkier the rest of the place is turning out to be, which is great!)
I watched the Super Bowl in Alpine at Railroad Blues Sunday. For those of you who don't know, Railroad Blues is our "competition" in having good touring acts. The bottom line is that the two places are going to be perfect complements to each other. Railroad Blues is pretty much a fun 281 club. I had a great time watching the Super Bowl there by myself. The game was great, for one, but RR Blues also provided a giant, exceelnt buffet. HUGE! I had no idea- I was just going to check it out.
Anyway- success. After that, on a whim I caught the new Daniel Day Lewis Marfa-filmed movie, "There Will Be Blood". An excellent movie, in my opinion. Fantastic acting and the "prophet" character (Eli) reminded me a bit of my (former) male stalker in Houston. Freak.
Anyway, I guess that's it for now; hopefully I'll have some nice shots from the American Legion Hall. - David
Posted by David Beebe at 4:30 PM