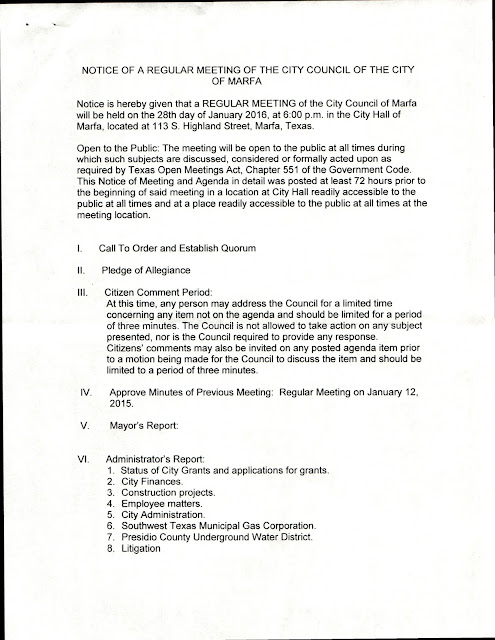 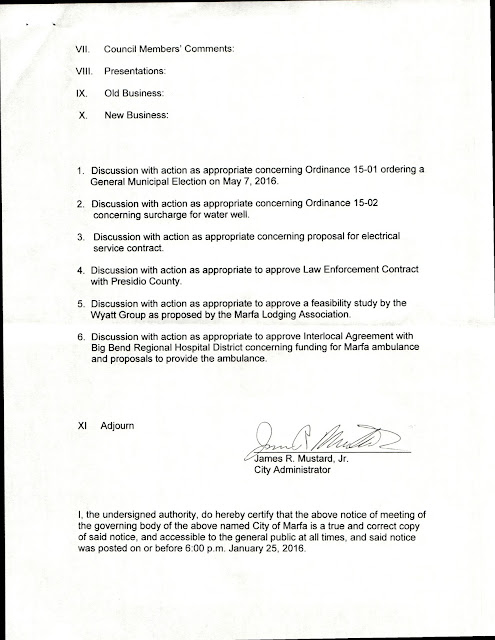 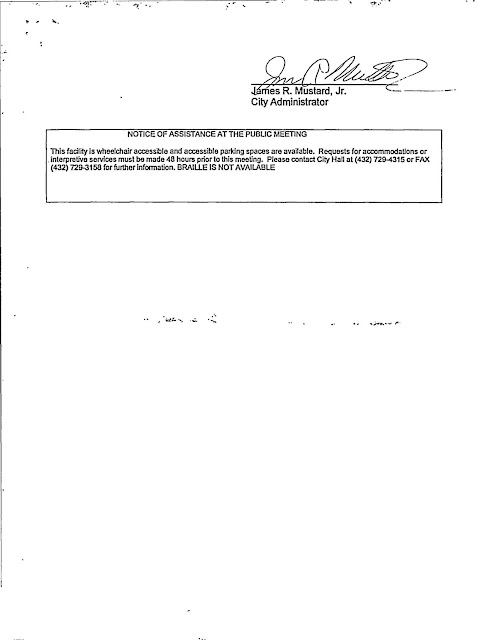 Citizen Comments:
Beebe comments regarding potential ESD formation, City of Presidio proposed action item regarding Presidio County contribution to Presidio EMS for continued EMS service at 25% of incurred costs (notes on this covered in Presidio County Commissioners meeting 1/26). Beebe encourages progress on ESD formation, explains that Mayor Ferguson came up with idea for proposal to Presidio council and gave short presentation during commissioners court meeting public comments 1/26. Good faith effort to find a solution, but also a way to get for in the door to grab County monies supposedly coming in from pipeline property tax revenue. Beebe encourages council to stay focused on countywide answer, countywide communication between all entities, interested parties. Doesn't think County will support the additional funding without more information and/or until ESD concept is eliminated.

Grants: proposals for admin of planning grant. Grantworks applied
Paving project has been advertised for admin and engineering, due Feb 24. One engineering proposal received from a Midland Co.
Engineer and surveyor for utility project re: St George street and infrastructure project have met.
Engineering for sewer plant auger project is done. Taking bids for completing firm. Will reduce overtime hours.
Water well project- engineering regarding how close to old well new well can be drilled underway.
Texas Railroad Commission inspected natural gas system over three days. No violations, but there will be two additional inspections this year. There used to be only one per year. Onerous.
New meters need to be purchased on water wells so that old ones can be recalibrated. TCEQ inspections. Sewer water meter also had a problem.

Mustard says he passed out a copy of City of Presidio resolution re: EMS funding. Says he doesn't see any interest from City Council of Presidio to try to achieve an ESD re: EMS services. Doesn't share Beebe's viewpoint but defers to additional insight on the matter. At some point City of Marfa will have to take up the issue and see what direction to go.

No Mayor or Councilmember comments.

New Business:
1) Ordinance 16-01 regarding General Muncipal Election for May 7, 2016.
Baeza, Scott and Bassham are up for re-election. Packets available at City Hall. Early voting starts in April, Rosie Garcia will be election presiding judge.
Approved.

2) Water well surcharge. Ordinance 16-02. Water well construction payments to Texas Water Development Board for loan for well construction. At time of budgeting, amount was unknown. Loan says that a surcharge is a possibility and can also be coming from interest and sinking fund starting next year. Mustard says that this year's payments are only for interest. $10062.78 due for this year. Surcharge per meter amounts to about $4.00. Surcharge next year per meter could be lower if property tax I&S accessed next year. Balancing users versus property owner cost allocation will be issue. This year because of budget surcharge option is only one. Next year's payments will ab plus or minus $36,000.
Unanimous.

3) Electrical service contract. Mayor asks for someone to move to table. Numbers not ready.
Tabled

4) Law enforcement contract with Presidio County. Mustard says this year's contract differences are regarding enforcement of ordinances and in monthly payments. Last year monthly was 24,100 dollars approx and this one is monthly for $29,050 mas o menos. Money budgeted to cover all monies, including those not yet paid. Manny asks about City of Marfa. Judge Guevara present. Asks about contract as she has not yet seen it. Mayor says it is nearly identical to last year's. Contract will go before commissioners court to be approved if approved today by City Council.
Simpson motions to approve. Unanimous.

5) Proposal from Wyatt Group - feasibility study as proposed by Marfa Lodging Association. Mercer Black DeClercq presents. Hotels got together to discuss teaming up to attempt to attract lodging and events like corporate business travelers, conventions et al.
Wyatt Group out of Austin helped. Most business traffic is Mon-Friday traffic, which is when the hotels are currently not full. Took basic proposal to Mayor, etc.
Simpson asks about meetings of groups. Mercer ads that they have had one unofficial meeting and will have first official one soon. Will include reps from Tourism Bureau. Meeting will be Feb 5th, likely at USO. Scot McGehee will come in as well, city reps, Marfa Lodging Association. Manny Baeza asks about tabling item until after first meeting. Mercer says their proposal is very solid, and says that would be OK, but the plan is developed. Plan basically asks Wyatt Group to analyze Marfa as a convention and business meeting destination. What would be needed, what do we already have, how to market it, how to make it work well. Hotel/motel funds are appropriately spent on such items. Mercer asks for approval. Simpson says that there is not even a head of board, yet, perhaps should table. Mustard says that this would be an agreement between City and Wyatt Group with help from Lodging Association to analyze. Manny Baeza wants to table until after meeting.
Mercer says that they want this to happen, will assist in any way possible. Mark Scott says he thinks it's a great idea. Dan Dunlap says Scott McGehee has reviewed this, met with Wyatt, was enthusiastic about it after meeting. Mayor advocates for entering into an agreement.
Manny asks about occupancy rate during the week. 30/40% during the week, 100% on weekends. Mustard says this is a good time for questions. $6750.00 plus travel expenses for this first phase of study. Comes from hotel/motel taxes. Bassham moves to approve. Seconded by Scott. Vote: Scott, Bassham, Stanley in favor, Baeza and Simpson opposed. Passed.
Mayor asks group to get more information to send out meeting info from city. Feb 5th, public meeting.

6) Inter-local agreement with Hospital District re: funding for Marfa EMS/ ambulance service. Vetted by City Atty Teresa Todd. Dunlap presents map. Different areas highlighted regarding City of Marfa EMS service area. South to Elephant Rock, out Casa Piedra road to end of pavement. West to Plata. Agreement does not require city to go to Presidio. It does require City to enter into a mutual aid agreement with City of Presidio. Mutual aid agreement would likely be separate. There is a current agreement with Jeff Davis county. Marfa now serves Valentine area. Mustard stresses need to develop an agreement with Presidio County to provide services outside city limits. Never has existed before. Prior agreement with City of Presidio, unapproved by council, was not followed to the letter by either party. Work on agreements will be necessary in the future. City's intent is to enter into good faith agreements/negotiations.
Mustard says no discussions with any parties have been had as of yet.
Bert LaGarde, head of Marfa EMS has assisted thus far on some consulting with Mustard regarding proposals.
Dunlap says that if this agreement is approved, he has two proposals from ambulance manufacturers to consider. Assuming hospital district looks at ambulance proposals as well, then city could be ordering ambulance within a couple of weeks. Stanley makes motion to approve Agreement. Unanimous.
Dunlap presents proposals from Frazer Co and from Siddons-Martin. Frazer is out of Houston, Siddons-Martin  is out of Florida. Ambulance manufacturers. Both have same specs. H/S is approx $292,000. Frazer is less radio, which would cost approx $7,000. H/S has service rep in Midland. Frazer units are user maintainable. Both trucks are Ford F-450s. Stockton Ford services chassis. Frazer is $ 222,000 approx.
Bert says that Terlingua runs Frazers, very happy with equipment, have remounted their box three times. Bert is comfortable with Frazer.
Dunlap recommends Frazer. Both are BuyBoard items, do not have to be bid by State law. Grant is up to $300,000 so if there is money leftover, there is some flexibility for some other related purchases.
Unanimous for Frazer. Lead time on ambulance 6-7 months.