After a couple of O'Dell's for me and Lone Stars for John at Buffalo Fred's we hit the road once again. I have seen the Safe Way Motors sign for years but never from this side since the traffic flows one way in the opposite direction. Here's another reminder of how much more you can see when walking. I would kill to have this sign for virtually any purpose, like opening a burger stand in Marfa called "Prince's" that also functions as a convenience store and small bowling alley. 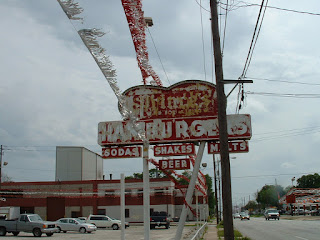 We passed W 11th coming into town (and one of the last original era Popeyes buildings on same corner). At this point the places to dine change from such and such "shop" or "diner" to names like "Thai Bistro". This is to forewarn you of the gentrified state of the Heights, I guess, and the corresponding prices.
Something that can infuriate me if I think about it to much is the removal of railroad lines for really any reason. There are so many ways to reposition rail lines or at least rail right of way in its existing state for public and or private transportation use. Here's a pic of the former rail line property under the Shepherd rail aqueduct just north of I-10. I remember the rail yard just west of this location about 8 tracks wide. We used to walk around there and look at trains in high school. 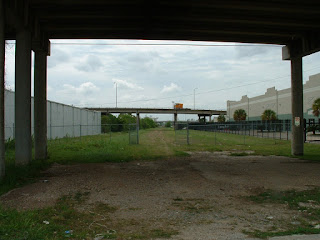 Stopped at the Valero on I-10 and Shepherd for hot coffee. I noticed that Muddy's Ice House on the northeast corner of same intersection is closed and that "Mike's Big 10 Tire" on the NW corner is now "Vic's Big 10 Tire" That's too bad- I liked Mike. They did a bunch of good work for me on the Murgatroyd over the years when they were on Washington and called "Buddy's Big 10 Tire". Buddy is Mike's dad.
I've been meaning to go to Mojo Risin' coffeehouse, but haven't yet. It's near the Time Out Sports Bar, past Jax and the rest of "restaurant row" or what Keith Coit used to refer to as "the Zone". If you knew Keith, you can guess what that meant. Anyway, here's a pic- they were closed and are apparently mostly a lunch place. 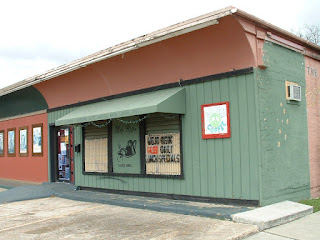 The last active East/West RR tracks through downtown are the UP tracks near Center St south of I-10. These tracks are the same tracks that go all the way to Marfa. Here's a shot. 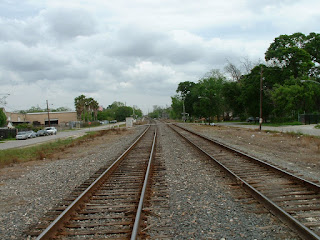 I was very surprised that I saw ZERO Mexican men waiting for work on the tracks. I guess John Culberson sent some fat white guys who drink Diet Coke in their office cubicles to "defend America" and got rid of them. Here's a picture of me holding up a nice sign I found on the ground there. 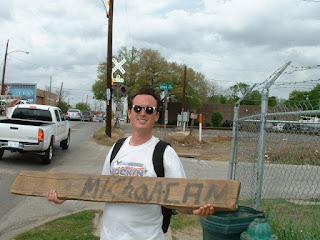