John Lomax and I decided to take another break at the Buffao Bayou. Unlike White Oak Bayou, which at Shepherd has been concreted in for flood control, Buffalo Bayou still has its natural banks and is much prettier. 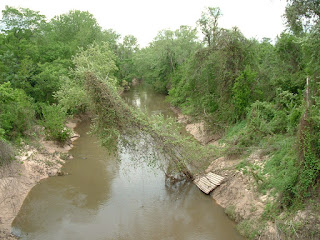 There's a lot of nature around Buffalo Bayou. I am blessed to be able to see it close up at least once or twice a week, as the Buffalo Bayou trails are where I do my running program. My usual run is from the Houston Club downtown (Milam at Rusk) to Shepherd drive (along the south side of the Bayou) and then back to the Houston Club along the north side trails and up the Sabine to Bagby promenade. It's a great run. You get to go through the Art Park, the frisbee golf route, the dog park, the Waugh Drive bat colony (twice) and past the Jewish cemetary. The halfway point is obviously at Shepherd and on the days when I'm not totally kicking it hard I take a break there. One of the things I noticed is that original Shepherd bridge over the bayou is extremely old and originally was built as just two lanes opposing each other. Later, two extra lanes plus some skinny sidewalks were added. You can see the original footprint of the bridge from the top surface as you stand on it, but if you go underneath, you can see how it was engineered and built. It's very old-fashioned, with steel braces and additional piers. The original structure still bears the brunt of the weight and was obviously built very well. Still, I'm surprised they haven't rebult this bridge since it's easily one of the oldest bridges in town that is used heavily. There is constant traffic over it, including medium weight truck traffic, dump trucks and the like. John and I went beneath to check the structure out, listen to some songs about hanging out under bridges on the IPod , and take a break. Underneath, we encountered a homeless person's nest, plus several different human waste depositories, various items such as bikes and a full-on centerfold taped up to a concrete retaining wall, and I found 16 cents. The story is actually funnier, but I'm sure John will write about it in his Houston Press article, which was the whole reason we took the trek. Here's a picture of the underside of the bridge. It's much better in person- I recommend checking it out if you're into that stuff. 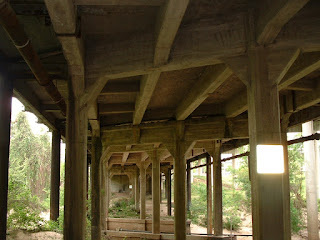 As we walked along past the River Oaks Shopping Center and its two Starbucks across the street from each other I couldn't help but remember how run-down that center used to be. I think it says more about me than anything else that I used to shop there much more often for a variety of dfferent purposes when it was a dump.
Just past that, near the corner of Pelham and Shepherd is a house whose resident has sort of "Orange Showed" his or her driveway up. The telltale sign of early 80's Mercedes cars in shoddy condition in the driveway leads me to believe that whoever did this is one of the "old rich" still populating the innards of River Oaks. Two really nice and somewhat subtle installations here. Just enough to be really cool, but not enough to rile up the neighborhood. These were not here a few years ago, by the way. 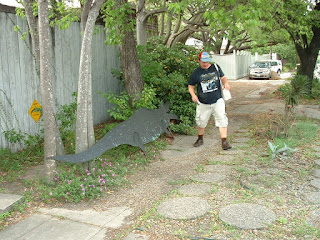 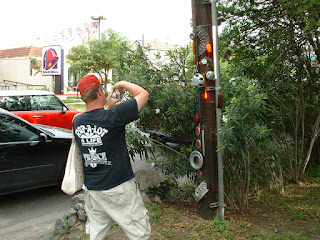 We stopped, had a beer and ate our first (and my last) meal of the day at the new Red Lion Pub at Shepherd across from where Leo's used to be. This is also spitting distance from the Arby's on the corner of Shepherd and Fairview, which was, in a better life, the Popeyes Fried Chicken I worked at back in '89. Back then the west side of the long block consisted of Popeyes, Kojak's Health Food Store, Pizza Hut, Lukes hamburgers, Jamail Bros grocery store, and Frost Bros dept store. Now it's Arby's, a vacant tract, the Red Lion, Petco, and crappy condo/apts (Human mini-storage) Lame.
The service and food at the Red Lion was pretty good. It's a nice place with good booths and soccer on TV. St Pauli Girl N.A. is their non-alcoholic beer. That's in my top three, so that was cool.
By this time it was about 5:15 PM and I had to be at the Continental for the Aqua Velva show before 7:15 so I told John I was going to break off. He decided to break it too, since Shepherd between 59 and Rice is all residential and not only lives back there but also grew up there. I got a Starbucks while he walked to West Alabama Ice House to meet Greg Wood for a beer. I met them down there and saw Opie Hendrix loading in for a gig at the place. The Alabama Ice House always amazes me to some extent. Laid back everything, plus all the late night drug dealers in the area start their day out there. It's sort of comforting in a really bizarre and almost sick way. Once again, I'm glad I don't do drugs- that way I can be cordial and/or distant at will with no baggage at all.
Took this picture of Nicoletti's- how many more years will this be here? What a fine building. Selling lampshades. I have a feeling one day I'll drive by and there will be condos. Say it isn't so! 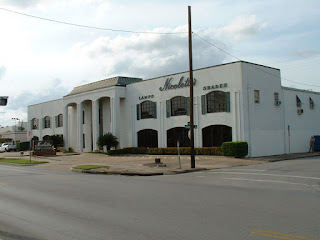 I had to split after a few words with John, Greg and his friend Emma at the icehuse, so I decided to utilize the hours left on my Metro day pass and catch the somewhat spotty W Alabama bus #78 back to the Continental. The smart thing was I knew I was pressed for time, so I started walking. It was good thing, for even after walking from the ice house past Montrose, there was still no sign of a bus. Right as I was pretty much decided that I would make it back to the club on foot before even seeing a 78, Gerard Choucroun's old friend Janice Rubin pulled up in her pickup and offered me a ride. That was really nice and helped me get to the show on time with a little time to spare after setting up equipment, changing clothes and all the rest. The show went great and at 2 AM I crashed HARD. Lots of walking for one day, and totally worth it!
Posted by David Beebe at 4:03 PM