SXSW and the rest for last week part 1 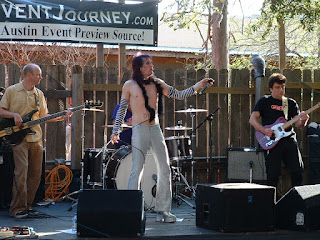 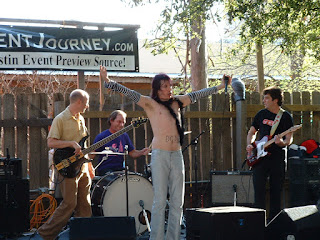 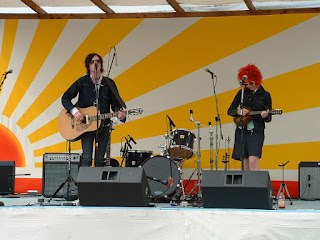 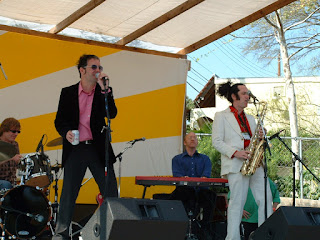 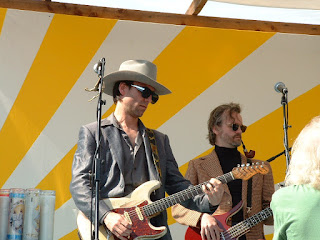 Oh, man- I had a great time in Austin at SXSW this year. I lucked out into grabbing a drumming gig with Beaver Nelson for a free Guero's dinner. It was really fun and Beaver played a great show. Matt Eskey played bass, and Scrappy Jud Newcomb played electric guitar. great crowd, rockin times.
I had a heck of a time getting into town. Drove the Murgatroyd through some stiif Houston traffic and then hit glae force winds and flash flooding between Hempstead and Brenham. Water got up into the motor and Murg started to cougha and stall. Meanwhile visiblity was down to about 10 feet and the sky was black. I was already cutting it close since I had a million errands to run before leaving town for 5 days. It always takes forever to get out of town unless you give in and don't try to accomplish jack before leaving in the morning.
I made it to the gig and, of course, Austin traffic was far worse than Houston's. This is always the case, however, I learned this back in '99 when we were doing the Bingo happy hours and pulling in every Thursday at rush hour from H-Town. There are shortcuts and tactics you can use, but the best thing is just to admit that it's going to take 20 minues to go four miles in Central Austin.
it's Lent so I'm not drinking at all. This made SXSW cheap and also made it easier just to hang oiut outside clubs and listen to music. I spent hours each evening in fornt of the Continental Club and never evene entered the buliding until Friday afternoon. The Continental "Gallery" was a different story, as they were showcasing instrumental funk/rock/jazz bands from Austin. Mike Flanigin (Hammond B-3) is the best act of all of them and he played virtually every day. I saw many of these bands and was treaed to smoking shows from Gnappy, McLemore Avenue, Dave Robinson and friends, and a bunch of others. That Meters/Booker T/Chuck Willis thing was nowhere readily available in Austin ten years ago. Now it's part of the local sound, big time. I credit the Continental Gallery for some of that, since it gives those bands a place to play regularly and great acoustics. There is no sound system in that club.
I don't believe I saw any official SXSW showcases other than Saturday night's Swampp Dogg show, which was excellent. He is great. He still has a great voice and reminds me a lot of Archie Bell. Landis, Chris, Kevin Remme and Patrick Benfield backed him up (McLemore Ave). It's very obvious that Swampp Dogg loves Landis' guitar playing.
I did see a whole lot of other cool acts including Dale Watson, The Small Stars (pictured- Miles Zuniag and Jeff Groves- 2nd pic Landis and Jeff Johnston), Chris Masterson (pictured with female mandolinist whose name I forget), The New Duncan Imperials, Shandon Sahm, Eric Hisaw, Kelly Willis, L'il Cap'n Travis, John Dee Graham, James McMurtry, The Dansettes, Ian Moore, and a lot more.
The big show I got to see (from backstage even) was the Willie Nelson/Merle Haggard/Ray Price/ Asleep at the Wheel show. Landis got me in backstage since he was playing in Paula Nelson's Band, which opened the show. This all took place at the Backyard. Tickets were being scalped for $125 apiece. It really was a great show and had much more energy than the times before that I have seen Merle Haggard and Ray Price. Willie has good energy most of the time, so his part wasn't so different. I like Ray Price live so much better than on record. His songs have much more life live than on the original recordings. There was a huge buffet backstage athat I was happy to help consume, plus juices and tea. That was nice. No booze backstage, surprisingly.
Let's see- my rock and roll highliget was Shandon Sahm. I have seen him before a few times and never really got it. He basically does a bunch of his dad's songs and some hard rock originals and jumps around like a glam rock star. this time I GOT IT! There was NOBODY there at his outdoor shos and he rocked the socks off of it. Pure rock and roll. i say this because he was having fun and so was I and the other 25 people there. It was loud as hell, but sounded good (outdoors is always better) The stuff he said was hilarious as were the songs. Plus, he did a great version of SDQ's "Groover's Paradise" and basically lectured the audience in a really fun way about what rock and roll really is. Two of the pics here are of him. Check the rock and roll threads. So good. I am a total convert.
Posted by David Beebe at 11:59 PM