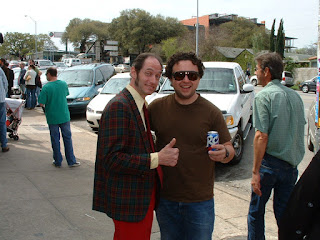 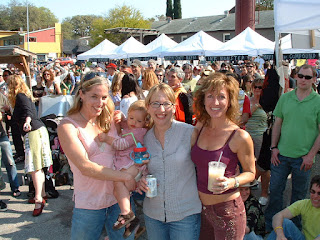 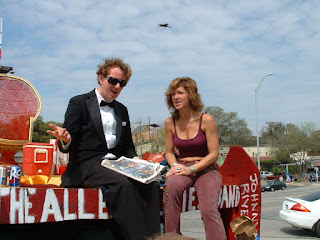 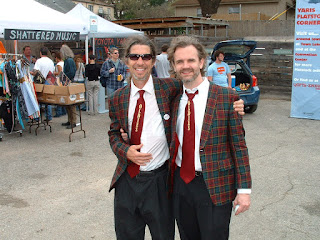 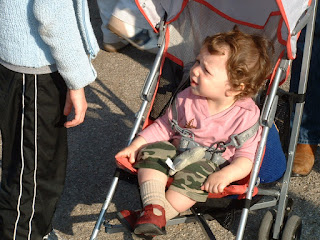 I checked out the TXRD Banked track Roller Derby bout at the Austin Convention Center Thursday night. I was jonesing for Derby since there was supposed to have been tow exhibition bouts hosted by the TXRG (flat track) girls during the day. That got cancelled due to the owner of the vacant lot getting cold feet. The new Bob Ray Roller Derby movie was showing, but I'm waiting to see that some time other than the SXSW film festival, which is a pain in the neck to say the least.
For more info about my banked track experience, go to my new Roller Derby blog/podcast site at www.switchpod.com/wblog/colonel/index/php . I should have that stuff up by tomorrow at Noon.
More band stuff- OK, the Allen Oldies Band played our two shows- 1-3 PM at Jo's Coffee out on the big stage and the 10 AM (GET THERE AT 9:30!) at Mojo Nixon's Mayhem show at the Continental Club. Both shows were a big success. I evensang a little backup. Mostly I just blew on the trumpet. Part-time oldies horn player jeff Johnston joined us for the Friday set and the audience's complaint was that the horns were in somewhat good tune with each other. THAT would have been a first!
Teen Idol actually made it to both shows and didn't leave early. He did bring a date for the weekend fup from Houston, whom he promptly ditched once she started bugging him. He slept in his car the first night and disappeared Saturday withiout a trace. I stayed at Landis' house but actually slpet in the Murgatroyd (in the back) Wedensday night since Landis was already asleep and I didn't want to wake him up since he had about 4 shows the next day. That worked out OK, actually since the Murgatroyd is now very spacious in the back and I had my drum mat plus the removeable bench seat cushion from the front seat to sleep on. Landis woke me up the next morning and we went to get coffee before he had to go do a radio show. 2 nights ina row in the Murgatroyd would not have been so good, so thankfully I slept on Landis' couch the next two nights. Saturday night I drove back to Houston after the Swampp Dogg set to miss traffic and to get to wake up in my own bed for Roller Derby day Sunday.
Conrad hung out with us on the Oldiesmobile after Saturday's morning show (pictured). Also, we ran into old friends Brooke O'Brien, Clayton Maxwell and Laura Pelligrino. Way back from the day- it was great to see all three of them! That's them in the pic- they look just like they did in college.
The baby is Lulu Wertheimer, the heiress to the Continental Club dynasty. She's very cute and gets a lot of attention, since she is actually a celebrity of sorts.
Jim Henkel and Jeff Johnston are looking good in the Oldies show uniforms after Friday's set in that pic.
Also, there's a shot of Laura Pellegrino and Allen on the Oldiesmobile. Laura's also a great vocalist/ frontman. Her Austinheyday was as the leasd singer for the original Atlantics Soul Revue but she has done more than that over the years. She's currently got a brand new CD and has been living and performing in Argentina. She moved there to Tango dance several years back. She may be back in Austin soon. Speaking of back in Austin, Mary Cutrufello was in town for SXSW and is moving back after taking a few years to rest her voice. She's been in the Twin Cities and loving it, but is ready to come back and kick it in Austin again. That will be fun to see her around.
OK, that's the short story for my SXSW. I guess I didn't really talk much about hanging out with Mojo and Skipper and the guys, but that's so normal now that I feel like a true veteran musician, which I am, I guess. Lots of talk about Marfa, of course, with mostly very enthusiastic reactions. I think everyone from the music business wants to see me go out there and try to make it work- better me than them! It's gonna be a blast- I'm looking forward to next year's SXSW when we'll be open and I can go with a tangible product description.
I got a prety decent sunburn too. My new sunglasses are GREAT. Very dark. My new "transition" lenses are not dark enough- so it's sort of like the old days, except you can see my eyes when I'm indoors and wearing my regular glasses. You definitely can't see my eyes with my new ray blockers, though.
Posted by David Beebe at 12:34 AM