It's now June 24th, I believe. I left the Airstream this morning without remembering to out on my watch; this is on of the most bothersome things I occasionally do to myself. Anyway, here's a general update about a few of the many things that are going on around here.
First off, the building construction is moving forward and looking good. I will elaborate more later.
Next off, I have put myself in charge of coordinating a project over at the city owned Marfa Activity Center (home of the city pool, senior center, and basketball courts). There was a line in the new city budget for replacement of the gutter system at the MAC building and the price was pretty over the top. Thanks to a bright city employee who remembered back into ancient history, I made a few phone calls and struck up an appointment with the Texas A&M agricultural extension office to discuss having them donate (through grant funding) a rainwater collection cistern and piping system which could be integrated into our gutter replacement project and at least re-use the water. I was also hoping to receive possible grant money to get the gutters done, but will have to settle for a lower cost to the city in the form of fewer downspouts.
Thursdays council meeting is when I make my presentation to the council on approving going forward with the project. The cisterns themseleves have already been located and funded. Marfa Rotary has agreed to assist in some way with the planting of a plant or tree garden that can beautify the structure and use the water we collect.
I expect no opposition to the project, as it benefits the MAC center by diverting water away from the parking lot and alley (where it was occasionally flooding back into the building under the door frames) and the city will be out zero dollars except for the pre-budgeted gutter repair. That, by the way, will come in under budget.
From approval point on, it's my little bird. I am sure I'll spend a good bit of time and sweat getting the project done- especially the landscaping, which will either be funded or donated (or a combination of the two). The labor for landscaping installation will have to come through me in the form of people donating their time. Rotary has already pledged to help and I can pull a few more guns off the shelf when the time comes.
Speaking of landscaping, I made a rare trip deep into the desert this morning to sift through a large junkyard. I was looking for a good rusty fence gate. No luck there, but I found a few nice items. Shocking to me was that, in the only clearly fresh pile of rubble at this unauthorized dump, someone had pulled multiple blue agave plants out of the ground and disposed of them along with a pile of broken ceramic tile. I rescued all the plants (large and small- around ten) and I will be surprised if more than 2 or 3 survive. I have heard they don't transplant well, but they are all still alive and I just couldn't leave them there. A few hours was spent digging a large trench and planting them in the yard, in a large pot, and in a dirt pile- the ones with few roots left. Anyway, I did what I could and hopefully a few will survive and I'll have some happy, beautiful blue agaves.

The Austin crew is back out here plugging away at making El Cosmico a functioning reality. Kelly Ramsey, wife of Miles Zuniga, is heading up the project and is here full time with their boy. That means Miles is mostly here too. As it stands, my Airstream and I are still the only human/trailer combo that is active out there. The Rockland Eagles guys are coming this weekend with a mobile recording unit to record some jams. I have been asked to participate, so I will. 2 weeks from now there is an art project that will require Adam Bork, myself and some other musicians to record some advertising jingles. The work pays and should be fun. Lastly, former El Orbits drummer Steve Begnoche is coming out here for about a week starting this Friday to help me out with some costruction. I believe we'll build a fence if I can determine the materials to use.

My radio show on Marfa Public Radio starts at 11 and I get there to set up around ten, so it's time to begin wrap up here. That show, by the way, is every Tuesday from 11PM to 1 AM at night. That's Central Timje and it's streambale from your computer worldwide at www.marfapublicradio.org

OK, here's some pics of some stuff. 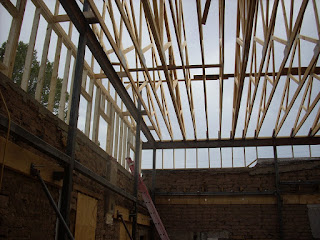 Here's a shot of our new roof trusses in place. I took this about ten days ago. Currently the solarboard and tin on one half of the roof is up and in place. The other half should be up before the end of this week. After that they'll finish out the new side walls on the exterior. 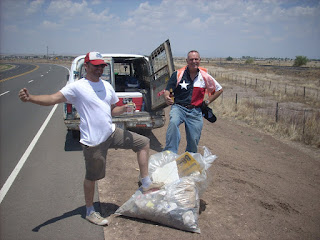 Here's a great pic of Corey Van Dyke and Chuck Stephensen with the Murgatroyd in the background. This, plus me and Johnny Calderon (not pictured), was the crew for the Marfa Adopt a Highway Clean Up. We busted tail and used all the bags TXDOT gave us. Then we drank beer and hung out all day around town. This was on a Sunday and it was HOT. 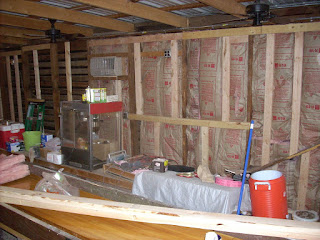 Here's a look at the newly braced game room east wall nearly ready for finish out. I did finish it and it looks good. I used the 100 year old shiplap that was on the ceiling of the old roof structure. The wood was hard to work with, but the project turned out great. It took me a whole weekend and I basically had to take Monday off since I was so burned up. 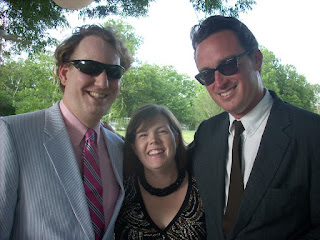 A couple of pictures here from Eric Hughes' and Liz Lock's wedding in Austin. This was Friday June 5th and it was a very nice affair. It was at the Barr Mansion, a place I have played a few times (Whic and Wendy Cummings' wedding and a Lone Star Rollergirls Awards party, to name a couple). The food was great and so was the company. Landis performed for the ceremony with Dave Wesselowski and a drummer whose name I always forget. First picture here is of me, Jessica Johnson, and Allen "King of the Oldies" Hill. Next pic os of Allen, Mikey Trafton and David Schoenbaum- three of the founding members of the Allen Hill Oldies Band. By the way, the Oldies Band has a new hit CD out in time for summer- Ride the Wild Surf!. It rocks, of course. Pick it up and support live music and the Oldies! Oh yeah, co pics of the girls here, but the bridesmaids at this party were fantastic! 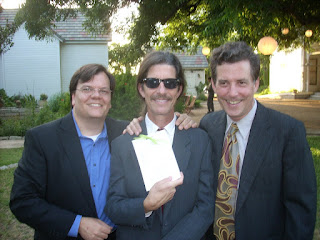 Another pic of the roof system in place (taken last week) 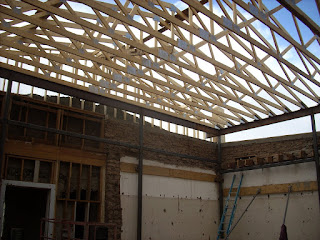 A picture of "kissing babies" while running for Marfa City Council. A posed picture, but no joke here. I am kissing Olive, Gina and Gory's beautiful less than one year old baby. The Marfa baby class of 2007 is really impressive, by the way. 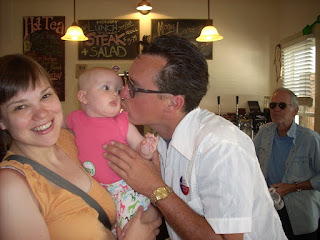 Bill Paulk's Mercedes lost its windshield when the hood flew up on me at 65 MPH and couldn't pass inspection before that because of a mystery and scary steering column wiring/bright headlight issue, but I finally met the Diesel Mercedes Benz GURU Frank Covington in Alpine last Wednesday. His back is totally out, so he no longer works on the cars, but a two hour visit and a trip into his Benz boneyard yielded me with all the answers I needed to fix this baby! Now the electrical/steering column issue is fixed and this Thursday the new windshield will be in. After inspection is passed then I'll head back and he'll walk me through fixing the broken driver's side window and the window lifter responsible for the random window shatter. 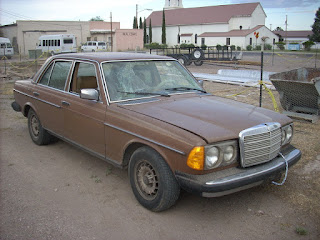 nice to see the Paulk getting improved

It was great to get to see you.

And, as for the gutter/rain collection project, you are clearly becoming a seasoned politician who has mastered the art of the "win-win"--added value and still under budget!

Keep up the good work.

Hey David. I had the exact same drivers-side window problem when I was driving around Sam's 1982 Mercedes 240D. Turned out that two of the bolts in the lifter assembly SHEARED for whatever reason, causing the window to drop into the door. Lucky for me, it didn't break, but I had to buy the new window lifter part, install it, then bend it into proper shape so it wouldn't scrape against itself, the window, or the inside of the door. Actually, it wasn't that difficult, but it did take the better part of 3 hours to fix, all told. I had to hold the window in the UP position with duct tape . . .

That sure is one cute baby. No wonder you won the city council seat. I'll be keeping up on CC meeting recaps from now on! Nice!

Hello. Great job. I did not expect this on a Wednesday. This is a great story. Thanks!