Sammie Relford- totally awesome and no one there! 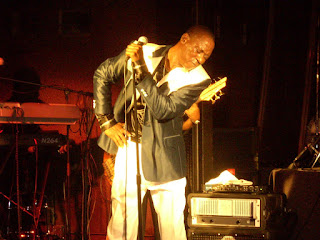 "So, I have a quick update on Sammie Relford and The Real Sammie's club. Sammie and his band were so good that I went back the next night (Sat)- mostly to pick up a CD of Sammie's originals, but also to see the show again. I'll speak about Friday's show since I saw the complete show and was there by myself.
I got to The Real Sammie's around 9:30 or ten and there were probably about ten people ion there. I made a note on the way (I took the rail) to see how busy (the fake) Sammy's was (at 2016 Main) and it was pretty busy. Faye Robinson and her band play there most every weekend night.
The real Sammie's is a nice place with seating, a tall bandstand and plenty of room for dancing. The Friends band (Sammie's band) opened up the set with a rocking selection of great covers ranging from Motown to 80's soul-pop. Led by Mr. Slim on drums and lead vocals, the band also features Spider on 7 string (yes) bass, Brucie on guitar, and Maestro on keys. Both Maestro and Spider sing a lot of backup vocals. Sammie finally came out and there were less than 20 customers in the room. I was shocked. I can't remember seeing Sammie with fewer than a full house since about '91 over at the Gallant Knight back when they had a Shure Vocal Master P.A. hanging from the ceiling over the band in the middle of the room and $9 Old Milwaukee pitchers (very pricey in those days). I can hoenstly say that Sammie sounded absolutely great, complete with falsetto, deep bass and everything in between. He basically put on a show where he gave 110%. I could feel him going for it and I know how he felt, singing to a nearly empty room and trying to conquer it. He succeeded and everyone there had a great time with most folks dancing. He certainly turned the tables on me and I am grateful for it. It had been a while since I had seen him and last time he wasn't at his best (thinking back he might have been sick at the time goven how much energy he gave two weekends ago). Anyway, here's a few photos of Sammie with the Friends band. Catch them NOW at The real Sammie's- next door to the Brewery Tap in the Magnolia Brewery building on Franklin downtown in Houston. I couldn't believe there were even fewer folks there on Saturday so I'm thinking unless something changes The real Sammie's may not last. By the way, it just opened in mid-July. I think all of Sammie's fans must still think he's at Sammy's, although it's been well over a year since I've seen him listed there. Oh yeah, also, I ordered the Sammie Relford documentary online (just came out) and have just received it. I'll probably get to watch it in the next few weeks. I can't remember the last time I was this busy and overwhelmed with work of all kinds.
href="http://2.bp.blogspot.com/_2ux0WdM-FdI/SLNzET0jVJI/AAAAAAAAAnY/SnjpXlcUQnY/s1600-h/DSCN1123.JPG"> 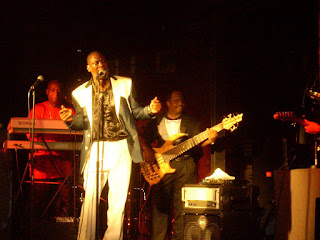 Yes, Sammie is trying to make it on his own and he needs his FANS to find him, spread the word!!! He wants to pour out his heart every Friday and Saturday night, so please come to 711 Franklin and see Sammie.

I heard that Pace Entertainment Group is now involved and that means it's certainly going to be Hot Now.