I answered the call from John N Lomax, Music Editor for the Houston Press, to walk from where Shepherd drive ends (at I-45, Little York exit) into town where it ends at Rice U.
10 Am John met me in front of the Continental Club and we boarded the light rail down to the Downtown Transit Center, where we made a connection with bus #8 (Yale). Bus #8 was slow, but eventually got us the the North Shepherd Transit Center, about one block shy of the end of N Shepherd.
We walked down the sidewalks of Shepherd towards better known neighborhoods such as Garden Oaks and saw the sights. That outer area of Shpeherd is mostly closed down fast food joints, auto repair shops and auto graveyards. The street is 4 lanes wide on either side and the speed limit is, I think, 45. For the most part there was nothing much of note along this section except its general state. we did get yelled at by someone in a passing car, saw several shopping carts overturned along the sidewalk ((Price Buster Foods, Walgreens, Food Town) and some dead animals. Mostly we just talked and checked out the barrenness of the surroundings.
The auto parts/graveyard section of the walk ends at about Crosstimbers or so and opens up into a more average mishmash of computer repair stores, pawn shops, plumbing supply companies and the like. I liked this area. At around 43rd st we saw a great combination plumbing supply/ trailer court place called Leslie Plumbing supply. They also had a really neat little mascot out front made of PVC and toilet parts. Here's a pic. 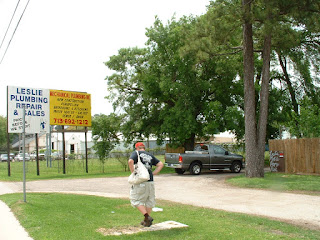 Back in the day I used to come out N Shepherd a lot for car parts, car repairs, musical equipment (pawn shops) and the like. I was surprised at how well I still knew the street. The most familiar territory to me outside the Loop is the Garden Oaks area. The Sears there has been a regular stop for appliances and tools and LD systems (sound company) is back in the warehouse/commercial area east of Shepherd on 34th St. I got two nice pics of the architecturally interesting and very dated Sears bus stop out front. That's a HUGE piece of property, by the way, and either Sears owns it or has a million year cheap lease because there's way too much underutilized space. 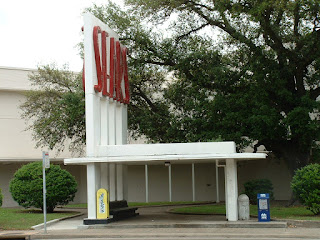 Crossing under the Loop we made the decision to continue on via Shepherd (heading against traffic) rather than Durham. Both streets are one way from Buffalo Bayou all the way to just outside Loop 610 and run parallel.
Shepherd was the right call, as we rambled into Buffalo Fred's Icehouse, an Asian run Mexican and biker icehouse just inside 610. Surprisingly, this is a very nice bar. Wood accents, an incredible backyard with an L.A. sized palm grove, and cold beers. Very little English or Spanish spoken here, but good stuff on the jukebox. I recommend it. Here's some pics. 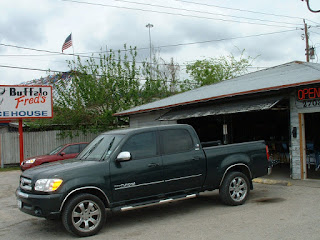 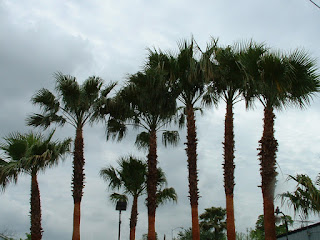 Man, you've got me outclassed as photographer. Those palms look great, and I envy the "Bad Dog" shot