Saturday morning of El Cosmico started out for me by dragging myself out of bed, grabbing a cup of coffee from the Brown recluse and picking up Liz Lambert's Parsche Cayenne SUV from El Cosmico to go get Barbara Lynn from teh Midland airport, three hours away sans traffic or weather issues.
It was a slow start, for sure- I was pretty well beat and had had a few more Lone Stars than I though Friday night (such is typical with keg beer for me).
Anyway, getting to Midland was no problem, and the car was fast, plus had a good radio so I could entertain myself by flipping back and forth between AM 1240 (Timeless Favorites) and Marfa Public Radio (lots of music since they don't yet have NPR- wish it would stay that way).
Barvara Lynn's plane was a few minutes early so she was there when I arrived. We loaded up, got some Dairy Queen at her request, and headed down the road. The conversation from Midland to Marfa was great. Lots of talk about Houston, Sugar Hill Studios, and just about every performer I could think of. She has been on stage with everyone pretty much ever (she started performing live in about 1960). She is one of the nicest people I've ever met, especially for her talent level, which is extraordinary.
Highlights included talking about B.J. Thomas, Glen Campbell, Nat King Cole, Roger Troutman and Zapp, Roy Head, Doug Sahm, Huey Meaux, The Contours, Little Richard, Chuck Berry and much more.
So we finally got to Marfa and I drove her to El Cosmico so she could see the weird scene before checking into the beautiful El Paisano Hotel downtown. She was surprised that it was more of a "Woodstock" style festival than she had anticipated, but she could see that people were having fun and that the weather was perfect. Since I was the bandleader for her band, which was me on bass, Conrad Choucroun on drums, and Miles Zuniga on guitar, we scheduled a rehearsal at her hotel room for 7 PM so we could be sure to rock the set and not stink.
Meanwhile, the music down at El Cosmico and the drinking and eating had truly begun. The baseball game I missed ended with Marfa upsetting Auustin and people had a good time. The first act, which I missed, was Rebecca Gates, an extremely cool girl from Austin who took Barbara Lynn back to Midland Sunday, since I was "driven out" for the week.
Amy Cook followed and then Adam Bork, with Conrad on drums and some cameos from Jeff Johnston took the stage. The picture doesn't show the slide show, since the flash blocked it out, but Adam's multimedia, once again, didn't didsappoint. Nor did the music- some of my fovaorite songs and he has such a cool voice. 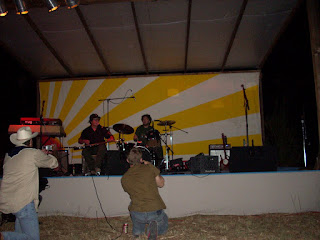 Tift Merrit followed Adam, but I missed most of her set because I had to get Barbara from the hotel. Once we got Barbara to the stage it was pretty much whirlwind. The set went great- sound was great (thanks Paul Minor!) and Barbara totally dominated! By the end, the crowd had been whipped into a frenzy and was dancing like no tomorrow. This was at about midnight when we finished. Nuts!! Here's a picture of Liz Lambert with Barbara after the set. Everyone was very happy. 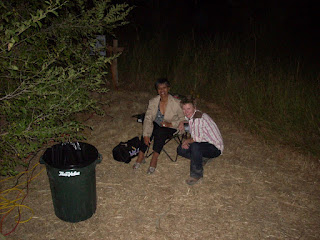 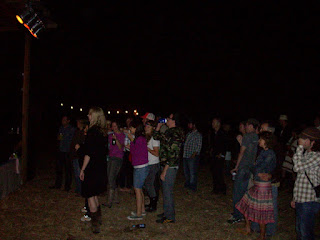 L'il Cap'n Travis followed with a barn-burning set and played until the county cope- sheriff and constable- came. Always a sign of a successful party. We rocked it out until past dawn in the Danish hot tubs since I was smart and brought a cooler of Lone Star and some other people had wine and vodka. The camera was spared the water, so no shots, but some other people have 'em. I took a few during recovery/cleanup after Noon on Sunday. That's about all she wrote, except a group of us got together Sunday night for a nice dinner and screening of "Hands on a Hradbody" at Liz'a Bunkhouse noth of town Sunday night. I was shocked I was there, given having vowed to and succeeded staying in that hot tub until dawn (jeff Johnston made it as well, even though some friends of his tried to force him to go to a tent since they were very afraid he was going to drown.) 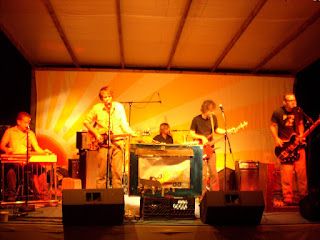 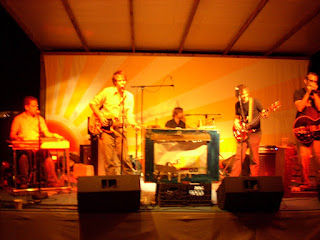 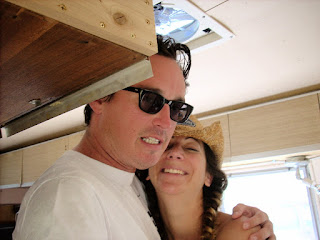 Oh yeah, after naps in the hammocks and then, at least for me, in the Airstream, Adam, Paul and I pushed an early 70's blown out Dodge truck into his yard that the city had tagged. Wow- it's not just me and the Airstream they're cracking down on these days! You can see we "look great" and were "working hard". 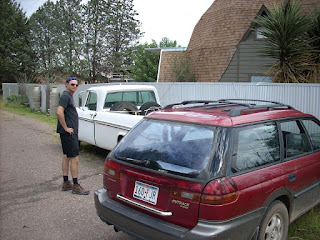 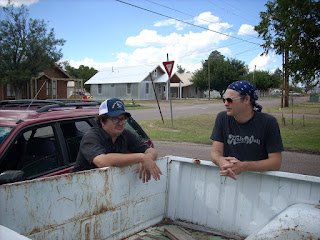 Yes, it was a heck of a weekend. Next year, same time, same place. See you there!- David
Posted by David Beebe at 9:19 PM