OK,
I know John Lomax has already turned in (and presumably posted) his account of our 9 hour trip on one of the sunniest (read hottest) days in Houston. He emailad me a Google Map of our route and we apparently covered 17 miles. This is with breaks and also some backtracking and circling around (not included in the mileage) trying to cross the ship channel via some other route than the Wayside Dr aqueduct. No luck on that- my dad says if you want to cross the ship channel anywhere east of mainland downtown, your options within the loop are Wayside and the giant Loop 610 bridge. I'll take Wayside on foot, 610 by car.
We started our journey at 9 AM at the Continental Club, fully expecting to make a bus ride out to the boonies and walk it back in, like we normally do on these long walks. Somewhere along the line, we decided to blow off Bus Route 30 (Clinton) and hoof it. The fact that the buses were blazing by us even when we we near a stop probably cemented that decision.

Walking North on San Jacinto, we passed Buffalo Bayou and the county jail complexes. That area is so much more bustling than it was even 10 years ago- the jail business is booming, for sure. Anyway, we got a couple of good shots here. 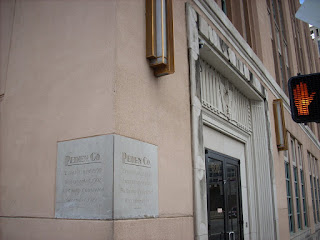 This first shot is of the Peden Building. The cornerstone reads "The Peden Co Est 1890, Incorporated 1902, Building completed 1929" Note the extremely fine copper wall sconces along the doorway edges. They look very old, and may be. They could also be newer handmade repros of originals. I would bet on the 2nd, given the proximity to 1) crackheads and 2) various dumpy metal recycling businesses. 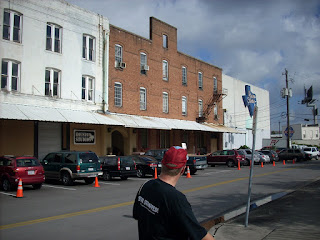 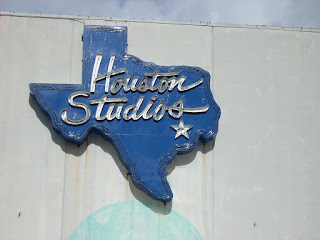 These shots are of the fabulous Houston Studios building, owned and originally developed for the Houston motion picture industry by my friend Milton Howe, a direct descendant of the original Harris family (of Harris County and Harrisburg lore). What a fine neon! That's John Lomax in the foreground of pic #1. I played a show in the former coffeeshop downstairs (Downtown Grounds) on my 21st birthday (July 3rd, 1992). Packed house, great time.
Across the street from Houston Studios is Mother Dog Studios, a metal working art house of some sort. 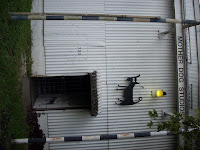 As we traveled through the last Concert Cafe/ James Bute Park area and crossed over I-10 to head towards Lyons Avenue, scenes like the following two pictures dominated our notable spottings. Don't fall into the street sinkholes! That's someone;s shoe in there. 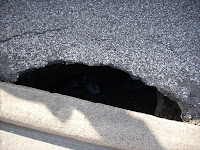 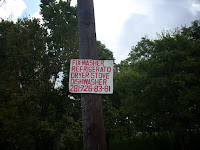 I'll tell you this for sure- the freaky thing is, once you enter that bridge on McKee over I-10, there are no more humans in view pretty much anywhere. Even cery few cars. For the route we walked, we would hardly see any sign of living, functioning civilization other than the occasional car or 18 wheeler for much longer than I would have expected. That, coupled with being surrounded by rusting industrial infrastructure, some in use but most long retired,- and this is only when it wasn't overgrown vacant lots. I'm talking giantt tracts of property that once had streets running through the- going back to nature. Once we got to around the Lockwood area there were signs of recnet activity. A group of abandoned shotgun shacks, which John suspected may have once been the famed "Sawdust Alley" along with some totally abandoned and stripped more modern buildings. Still no people, although there was a large Baptist Church that had seen better days.
As for the pics- I can't figure out how that steel beam landed in that house. Every other sign of any metal nearby had been taken for sale to the very sketchy metal recycling center down the road, where, very ironically, I found a quarrter on the ground outside of. Still no people. 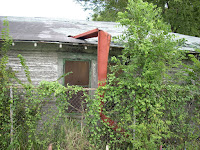 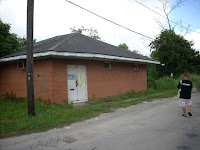 Those pictures were taken along the aqueduct feeder of Lockwood. We reached Clinton Dr, of which the point terminates at Lockwood and soon made it to a truly functional and somewhat inspirational steel recycling business that seems not to be sketchy. A clean steel scrapyard! I've never seen one before. Not only clean, but landscaped complete with small park, some scattered benches for the non-existent pedestrians, and a gaggle of great signs with good common advice- advice that may keep the seedier element going to the aforementioned scrapyard, which was the polar opposite of this place. This is the Proler family steel yard. Enjoy the pics and then I'll continue on with the next post before I do something stupid and accidently erase this one. 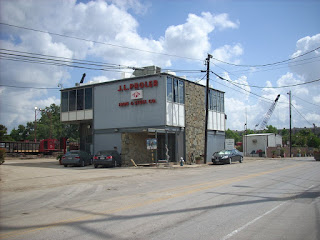 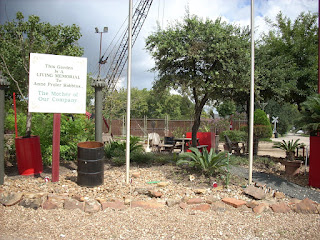 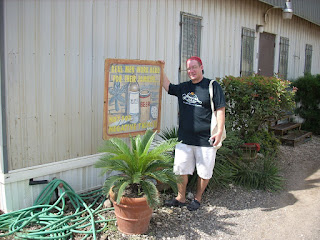 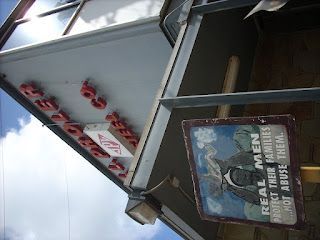 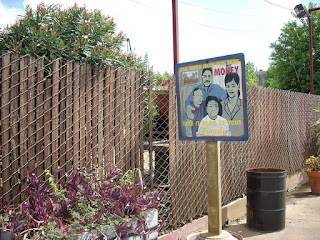 Here's my observation of the El Orbits. When they started with Charlie it was like totally lounge and death to Hippies and hIppy stuff and Davey fought the Hippy element at the lounge and finally left it as a result of it before the fans rejected the rest of the hippy stuff in the area and it all went down. Then Mr. Hinkel and later kid kept increasing the HIppy atmosphere- I remember Mr. HInkel sneaking in more and more 70s post HIppy Pop to the playlist and like Kid went real hippy and did the shoulder moves. And for a while Davey upped the lounge and Moon PIes and Soul Food and things not hippy. But then after hinting at free he goes free like a real hippy and that's great- I mean
win a date, free soul food, free video games, it's great. But like now the strip is slowly going total hippy and Tim Hardin- my god- I heard If I was a Carpenter while eating a Taco and the Houston Press signaled out the Hippy creep in an article, I forget which one. And like they have an 80s band with the Longe and Lite Rock that I requested when I was older and not as smart and the lead singer is total hippy child. And now Davey's in a commune for old hIppy artists in the desert living in an airspeed and god knows what,.
He probably seriously watched the Pledge Drive showing of Monterey Pop and "got off to it" on his PBS while smoking some of the funny smokes with the artists. I'm barred from his old haunt but man I bet Mr. Gray and Al are in shock. Charlie is probably rolling in his grave! I blame it on the Y kids influence and their boomer parents. It's this Goddamn Mr. Rogers saying we're all special just for showing up and we all get uniform grades in
Basket Weaving and Humanistic Psychology and get to have free love with all the girls at work and start out as the boss. Ar this point Davey probably refers to Ricky Nelson as Rick and reckons the Garden Party album is his only good work and the rest is trash. i guess I just don't get it. I do have Beggar's Banquet and The White Album and yes even Talking Book on Vinyl but Tim Harden- the next vinyl I'm after is Two Steps From the Blues and I don't do post Riot Sly & The Family Stone. My 60s part is Velvet Underground not David Crosby. I'm still after a clean copy of the first Wee Hours ep from Sinatra and the amazing Going Places vinyl. I always thought Davey was tie clips and BBQ/Lucky Burgers and stuff but man was I sure wrong. Oh well maybe I'm getting the creep too, the Gen X thing is dead and I'm following the lead of the Ys too. I hear we all have a hippy lite in us and maybe I just didn't want to admit it.