Here's another great pic of Proler Steel's neighborhood enhancements, although the extent of their neighbors is nostly abandoned warehouses, railroad spurs, and overgrown vacant lots. Still no people other than a few Proler employess, who, by the way, were friendly and waved to me. 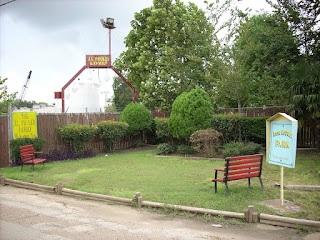 As we walked down Clinton and left the friendly confines of the Proler zone, we took a right and walked across a very old wooden bridge (you can see the wooden slats beneath the backtop). The bridge is braced with vertical wooden piers that are some of the largest I've ever seen- hence the weight limit of 12 tons. This bridge crosses over a small tributary- looks like a creek, not a bayou, and is relatively clean except for some miscellaneous trash here and there that likely blew into it. across this bridge stands a very old neighborhood of sleepy frame houses- very old and very peaceful. Apparently mostt are owned by a local artist, who lives in the largest at the end of a dead end. Great trees- the temperature was at least 5 degrees cooler in this enclave of civilization. Everyone was at work, it seemed, so still no sign of actual human activity. This is all within 2-3 miles of central downtown but should remain for quite some time, given the availability of countless acreage for townhomes closer in and more accessible.
Meanwhile, we walked back to Clintoon where I was amused by yet another notice discouraging metal looters from yet another abandoned warehouse. 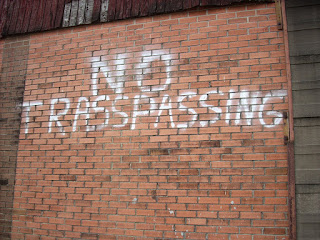 As we continued eastwards on Clinton we were now getting very close to being alongside the real deal- the older part of the Houston Ship Channel. Notable is this abandoned Houston Chronicle distribution warehouse. Close to the Union Pacific N/S tracks and Lathrop Dr. I got a kick out of the rusted off "exit" sign for Lathrop. I was also somewhat surprised that the railroad maintenance firm that has this great sign is still cooking. There was a group of UP workers doing track maintenance on one of the four or five sets of still working, parallel railroad tracks. Rail and shipping, plus the large container trucks that service them is what is happening down in this area. Lots of that, and nothing else except for a few "importing" companies in a newer modular warehouse complex. By this time we are hot- yes we were both wearing black t-shirts, and what little sunscreen I had put on had been sweated off. Oh yes, I should mention, we actually had found our first convenience store on Lockwood and I had an incredibly cold and excellent RC Cola 20 ounce, followed by a Lone Star. At this point, on the horizon is the Wayside Dr overpass and several old steel railroad bridges. Here's the pics 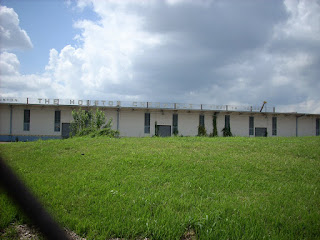 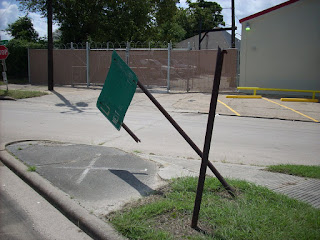 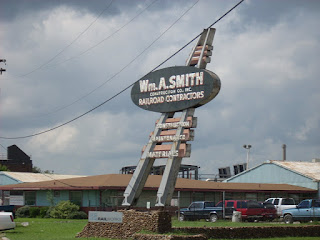 -
YET- before we get to the bridges we are approaching John mentions that he is smelling the worst smell he can possibly imagine. I didn't think it was that bad. Granted, it was strong. Then, off to our right we see that there's a huge City of Houston wastewater treatment plant. At least 8 or nine dredging ponds open to the sky. later we would see the "cleaned" water being discharged into the ship channel from our vantage point above the Channel on the Wayside Dr bridge/aqueduct.
No condos for this area anytime soon. 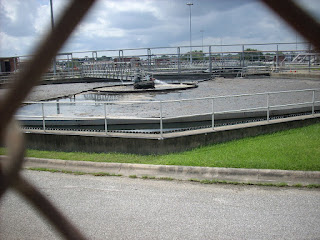 OK nerds, especially those of you who might be like me and like things like steel bridges and railroads. We crossed under two old steel railroad bridges, built in the same year and less than 100 feet away from each other, but built by two different rail entities in conjunction with the same local officials. i love the fact that two bridges built in 1927 can still handle hundreds of thousands of pounds of freight per day, every day. The pics are large so hopefull you can read the text on the brass plaques beneath each bridge. 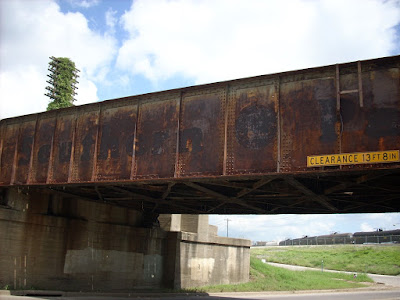 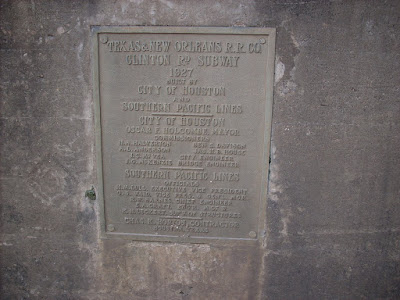 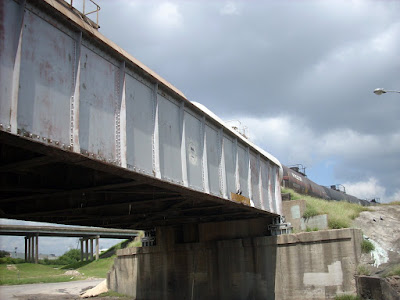 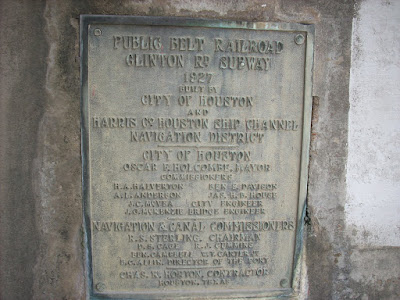 About another mile or so or four lane highway without curbs or sidewalks, known as Clinton Dr and we see an oasis! It's a bar. It's about high noon and we are ready to sit for a minute, have a drink and chill out in a local tavern. As we approach, John notes the color of the building and says, "No that's a modeling studio". We still can't read the sign, but when we can I rejoice that it is, indeed, a bar.
The sun is so bright that when we walk in to the place John and I are momentarily sightless, waiting for our eyes to adjust. Of course, since I am wearing sunglasses I see pretty much right off that bat the group of 16 or 17 year old hispanic girls gathered to the right and the bar, manned by a middle aged hispanci woman on the left. As we walk in, all the men in the place walk out except for a much older cat wearing dark galsses in the corner. As we sit down at the bar, I remark to John that he was right. The place is a whorehouse. Undeterred, we order two Budweisers. $4 apiece and served with a frown. After a $2 tip the mood lightens up. We soak it in for the length of one cold beer being consumed by twom overheated and out of place gringos and get out while we still can. Tension is pretty high. As we leave, all the men walk back in and we are back on the sweltering streets of East Houston. This place is one black west of McCarty on Clinton. Here's the pic. 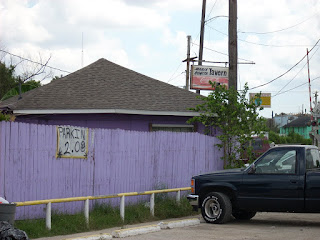 As we reach McCarty there's actually several other restaurants/nightclubs, all of which look like they are maybe a step up from the aforementioned, but maybe into the same game on the side. After all, this is sailors', Railroad men and truckers' turf. In view in the far off distance on Clinton is nothing but desolation and the 610 bridge. time to make a left on McCarty, which shows much more promise. As we leave the ship channel behind us, we are looking forward to more culture, although the last stop more than made up for what we didn't see earlier. One place we did pass but did not enter is the "Seamen Nightclub" a place of former east Houston fame, back when they used to let the sailors off the ships. John Lomax found an old story in the Press archives about the decline of Clinton Drive, whihc coincided with the drop off in sailor activity. I can't even begin to imagine the debauchery. Here's some pics of some of the haunts in the area we were too early in the day to explore. 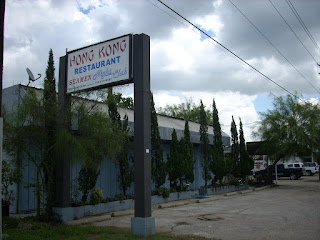 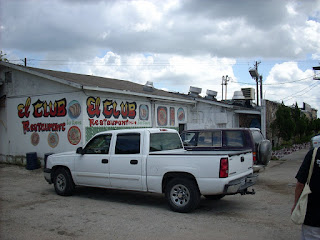 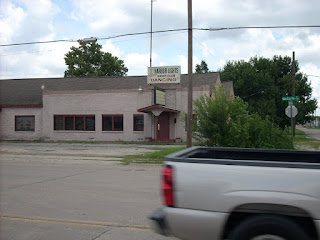 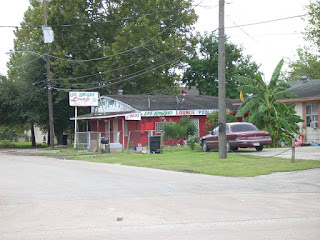 Note the sign out front of Los Amigos Lounge advertising "CHICKAS". Love it. A few more notables follow- specifically the transvestites painted on the La Estrella Bar. Also, as we were taking the picure of the "Apartiman for Rent" sign a lady came out of the Harbor Lights Bar to see what we were doing. 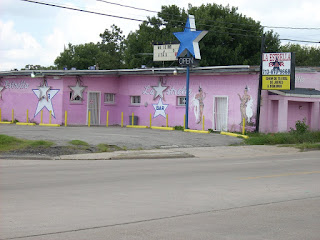 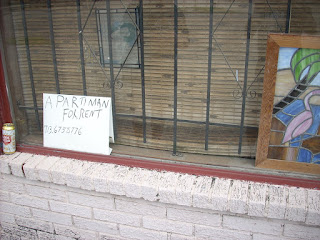 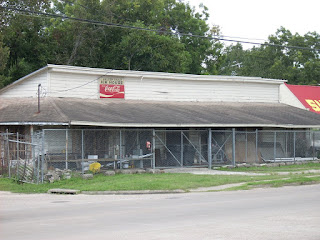 Ok well, it's pretty late here in Marfa right now. I guess I'm about 2/3 of the way through with the truly interesting stuff. I'm going to carry the computer with me this weekend and hopefully I'll fiinish this business up. There's more, of course. - David
Posted by David Beebe at 10:02 PM

Thank you for posting so many examples of really shitty spelling.

Great pix, by the way.

woowwww..great insight, you are truly showing the must disgusting and right down dirty part of the east side of houston. so when are you going to handle Eastend? Everything you are mentioning as far as blocks go is pure 5th ward, no second ward love, huh? that's ok, everyone knows what really goes on in second ward anyways and it ain't chickas with stars on their forehead either.