OK, so I didn't finish the Clinton Dr walk posts. Sorry about that- I've been away from the computer. The short story is that we came back via Wayside and Navigation, nearly passed out from the heat and were saved (barely) by some high powered margaritas at ninfa's. Actually, that's when I came as close to passing out as I have in years from cooling down from tthe heat exhaustion. Once I made it out, though, I was fine. We finished off at Warren's. I went back home. The next day I went to the Houston Roller Derby luau at the Alabama Ice House. Pictures were taken there that will keep me out of Houston politics. That being said, I had a great time.
So anyway, I had to return to Houston again the following weekend for Roller Derby and this time I came back from Marfa via a night in Terlingua, TX at one of the nation's finest bars, La Kiva. Joe King Carrasco was playing, which is why I went in the first place. I was in the big Brown Suburban and had me bedroll, a cooler and some clothes. I was also pulling the flatbed trailer back to H-Town so it was a little slow going up the mountains of HWY 170 from Presidio through Lajitas and into Terlingua. Here's a nice pic of the "tepees" rest stop on 170 after your car either makes it or doesn't following a long climb at 15% GRADE. Yeah, hardcore. The last time I did it the Mercedes was down to 5 MPH (diesel). The Brown did better, but I think we were still at around 15 MPH by the top of the climb. 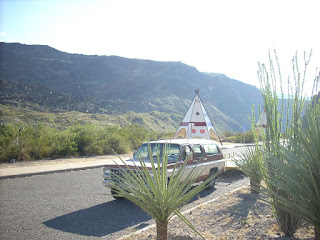 The Rio Grande is as high as I've ever seen it, thanks to the great rains of this year. Check it. 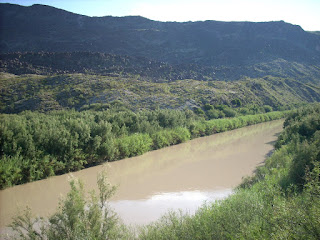 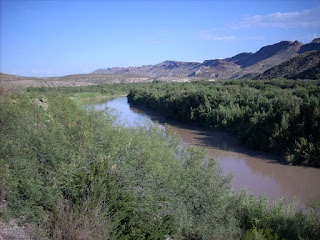 That's the scenic "long' drive from Marfa to Terlingua. I recommend it for any reason.
I got into Terlingua around 5:00 and Joe king had already set up at La Kiva, which is a bar built around a cave on a creek bed in the side of a hill. Yes, really weird. Think Astroworld's "Alpine Sleigh" in a desert setting. It is truly beautiful to see bands there since they play under the stars (and you can really see the stars). Here's some views of La Kiva, open since '82. 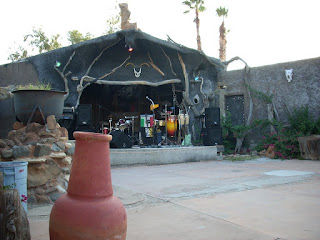 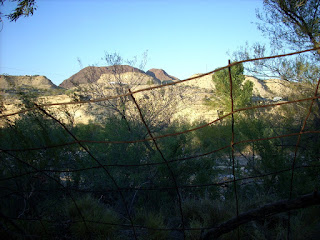 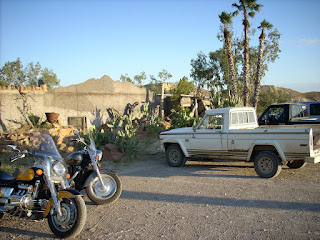 The parking lot also functions as an RV park, which is inhabited by permanent residents and also those passing through. Although I was prepared to pay the $3 to spend the night in my truck, there was no one to take my money. it's OK, I spent at least $40 at the bar on food, drinks and tip.
Joe King came on about 9 and the crownd was thin. Steadily, though, people came in and then a tour bus (Green Charters?) came in full of Europeans, mostly women. Nice. They were way overdressed for the desert and La Kiva and mostly kept to themselves, but by the end of the night the dance floor was totally packed with everybody, plus dogs and it was nuts. Bars out here close at midnight, so it was decidded there would be an afterparty at the tour bus. I went over there with some other folks and joined the busload of Europeans, most of whom had drank far too much to stay up any later. However, about 1 AM or so Joe King and his band showed up with instruments and we bagen to play outside the bus. Totally badass. Until 3:30 AM in fact. Here's some pics of him onstage and also in front of the bus 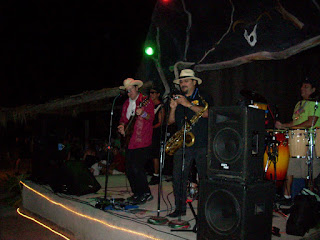 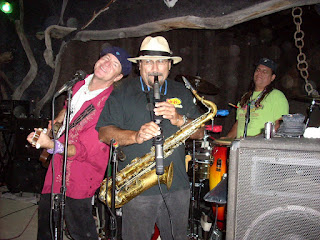 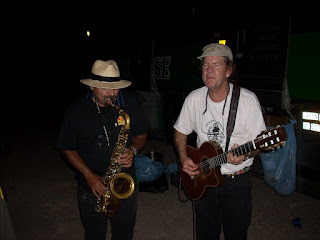 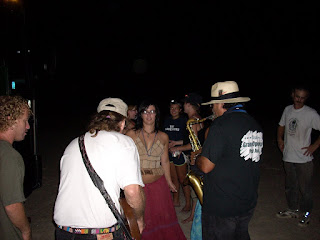 Note the synth sax/flute the sax guy is playing onstage, I've never heard a funnier sounding instrument for "96 Tears" but, my goodness the dance floor was rocking!
So at 3:30 I trudged off to the Big Brown and got up the next morning to head to Houston. I stopped off at the Study Butte store and at at the awesome littel deli that never seems to be open when I go there. GREAT breakfast and great coffee. it saved me for the 650 mile drive back to H-Town that I did that day. 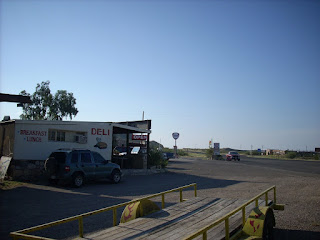 As an aside, I must say that Joe King's guiatr playing when he's playing traditional Mexican corrido melodies is somewhat astoundingly good. He really ought to record an instrumental album or do a soundtrack. I mean, it was pretty much magical under the stars out by that bus. Those Europeans couldn't believe he actually came out after a 3 hour show to play for free for another 2 hours! Ha ha! Totally awesome.
Posted by David Beebe at 7:31 PM

It's the "Green Tortoise" bus, ya dweeb.