This year I attended and volunteered at the El Cosmico Festival (2nd annual) on the El Cosmico property at Madrid and Abbot streets on the edge of Marfa. The property is about 5 blocks away from the funeral home/Padre's but is decidedly out in the country, as there is really nothing south of El Cosmico except for some Chinati installations. The giant border partol facility is next to the land, but far away enough so that it's really not noticeable.
I was assigned the job of stage manager, working alongside sound system engineer and provider Paul Minor, but wound up oputting together a band to back up last minute headline Barbara Lynn and also emceed. The festival began on Friday and ran until Sunday around Noon, with Saturday being the really full-on day, complete witha baseball game between "Austin" and "Marfa". I missed the game because I was driving the 3 hour trip from Marfa to the Midland airport and back to pick up Barbara Lynn and get her settled into her hotel room at the El Paisano. The rest of the time, I was pretty much on the scene.
My Friday at El Cosmico started with helping the bands load in and hauling a few items for the bar to get set up. The terrain is flat out there and there are four restored "ghost" trailers (no electricity or water) that are ready to become part of the permanent El Cosmico installation of working travel trailer guest houses. For more info on the vision behind El Cosmico as a business, please visit www.elcosmico.com . The site is a work in progress, at this point, and good things take time, so the pictures you see here are not iindicative of the future look of the project except probably in the funkiness factor. It's going to be a fine work once it's finally ready to lift-off.
Friday night featured some great bands including my favorite Marfa act, the Pleasures of Merely Circulating. There was also a hot Austin up and coming band called "The Steps" that was pretty good. I am biased towards the Pleasures, however, for a lot of reasons, coffee being one of them. Lots of Austin people were already in attendance friday including Jeff Johnston, Conrad Choucroun, Patty Cater, Ann Tucker, Sam Douglas and many more. Here's a pic of Jeff Johnston with a girl from Austin named Courtney, whom I met minutes before taking this shot. Hammocks are a big part of the El Cosmico ethic. Check the landscape and bar area. DSCN0297.JPG"> 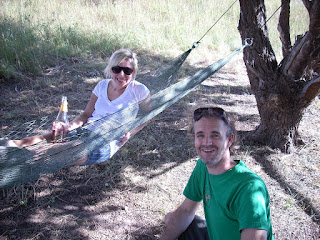 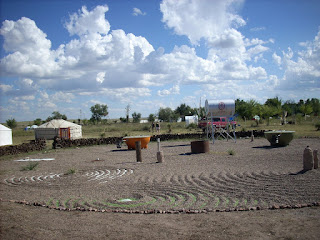 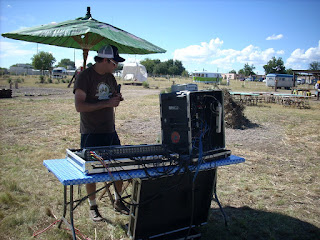 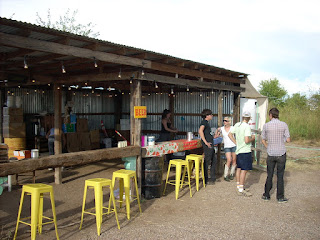 Note in the picture of the landscape the Danish heating tubs and also the patterns of recycled crushed glass in the gravel. These tubs were the scene of our all-night party Saturday night after the shows had ended and the final beer was sold.
Here's a picture of "The Steps" out of Austin 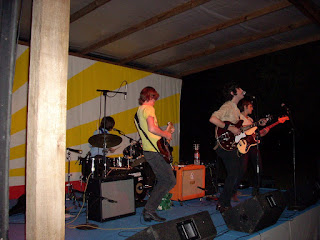 Here's a pic of "The Pleasures of Merely Circulating" 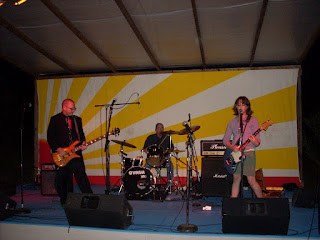 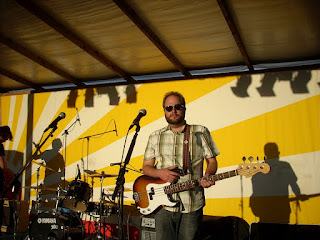 Anyway, several other good groups played Friday, notably a group called "The Savage Trip" featuring Austinite Michael Hall. In the meantime, we were foooling around offstage at the Food Shark, Adam Bork's falafel and hummus truck. I got a nice shot of Krista, Adam's better half and the food genius behind the wonderment of the Food Shark, with this nice Tarantula on her shoulde. Tarantulas are a part of life out here when you're a few yards away from downtown. 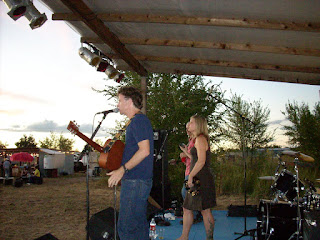 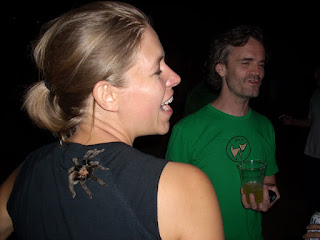 Friday night ended for me when the shows were over and I opted to go to a party at a private residence and not the official afterparty of a Ballroom marfa event. Apparetly I missed some great stuff, including the sight of Gory breakdancing and a cameo appearance by Vance Knowles/ Jackie Pepper singing Neil Diamond at the top of his lungs for hours. to make matters even more funny, I woudn up at the marfa rock shop, thinking that was the party and hung out with those guys for a while. Then I went further up the road and stopped at a pickup truck in the neighborhood and had a few beers with a couple of hispanic guys I didn't know. Totally ridiculous. I never found the party and really needed to go home anyway, since I was due to pick up Barbara Lynn in Midland the next day around Noon and would be leaving out before 8:30 AM.

Oh yeah, Conrad entertained me by bringing Dr Grabow into the mix. It struck me funny to see them smoking pipes in the middle of nowhere. Also, a good picture of the Food Shark truck. 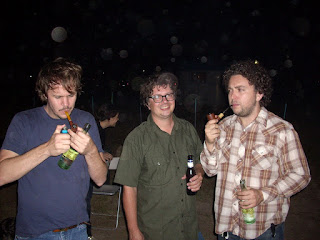 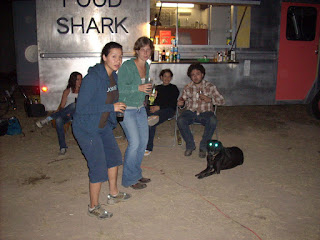 Saturday/Sunday next post.- David
Posted by David Beebe at 8:14 PM

I hear your main band has a new vibe- vibe what the hell is vibe coming out of a lounge band. Man I miss the good old days- at least the Sears is still around Main and they won't change on me.