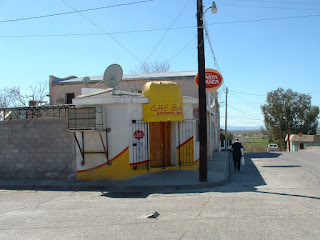 Oh, yeah-
In regards to my day trip to Ojinaga, I brought a ton of my homemade Jambalaya (prototype for the club recipe) with the self-imposed directive of finishing all of it before returning to Texas. Raw food is technically not permitted to cross the border, at least coming in to the U.S.
So, with about a half a quart or more of jambalaya to eat, I decided to check out a few cantinas in Ojinaga and have a beer at each. Well, I check out three, but only took a picture of one, and only the exterior. I was not too comfortable taking pictures inside. These cars are dark and inhabited by a barkeep (surely the owner) and a few laborers off work being loud. The Mexican equivalent of a redneck bar in Pasadena. Anyway, the most remarkable thing was the glass brick and yellow wall tiled bar with the "mother of bowling ball" formica top in one place. Really cool and worn out- a permanent install dating back decades. The best thing was the bar rail at the bottom front (where you rest your feet). it was built up about five inches of the same yellow bathroom wall tile and the well between the "rail" and the bar was also tiled. In the center of the bar was a floor drain and people were throwing junk into the gap. really, though, it was much more like a long urinal trough. That's exactly what it was- a yellow tiled trough with some glass bricks and more yellow tile above it. Incredible.
Father Bill and I are supposedly going back to "find our bar" in Mexico for the club. That would be great, actually, but a tough mission. I will definitely show him this place.
The picture is of the "Che" bar- the 1st one I went to. They took dollars and I was the only one in there. The barkeep spoke English but was defnitely a native. Beers at the bar (for Gringos at least) in Ojinaga are between $2 and $2.50. I noticed the prices were generally cheaper when you paid with pesos.
Posted by David Beebe at 10:43 PM