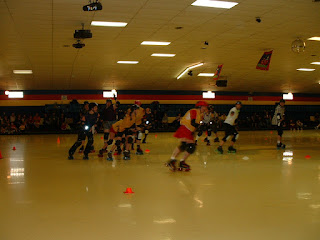 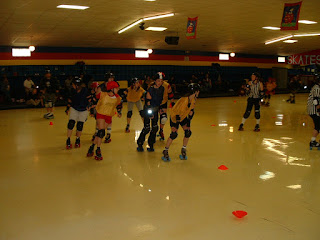 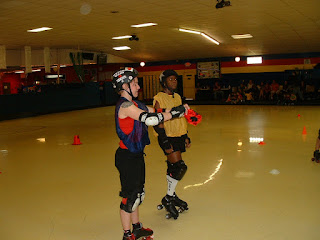 Sunday was friends and family day at Houston Roller Derby practice. Practice was early (10 AM- during church for a lot of folks) and turnout was light. That was sort of nice for those who came, because they got a good view of what derby looks like and what some of our practice looks like.
I got winded during warm up drills and sat out some of it. I had invited Bill Shirley to come to talk podcasting, so we did. After some debate (mostly internally between me and myself) I decided that we'll initially leave the girls out of the podcasts and focus on announcers only. This is because I've caught the vibe that certain girls are either nervous about the podcasts or think that they might do something like hurt attendance. I guarantee if Austin was doing these things girls would be clamoring for it, but since it's just the leagues up north forging the territory, the fear of the unknown is greater than the faith of them in me. No problem- we'll just limit it to commentary, like ESPN does 95% of the time. If they like it, we can expand, of not, we can operate independently. I know people will enjoy some HRD roundtable discussions from us.
The girls scrimmaged during practice and it looked good. The pictures are from the scrimmage section of the day. I really like the picture of Death By Chocolate and Carmen Geddit at the jammer line. It was cool and most everybody- new girls and vets- did well. There was some excitement among the F&F audience.
The practice ended with the girls being divided into their Army, Navy, Air Force and Marine teams for our first bout, which will be an exhibition and will not feature the normal teams. It will be vets vs. vets and new girls vs. new girls. A great situation to have some announcer preview commentary on. I am excited about that!
Posted by David Beebe at 1:51 PM