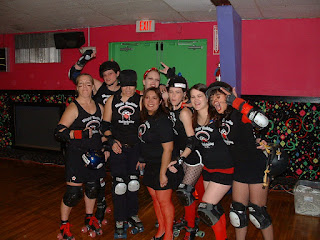 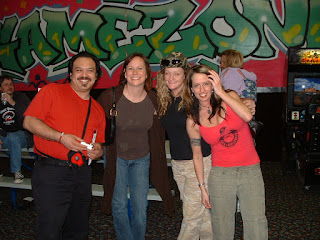 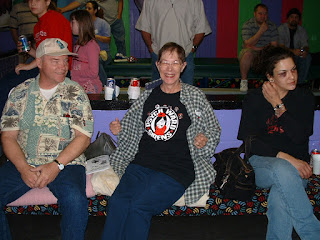 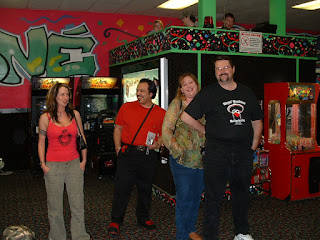 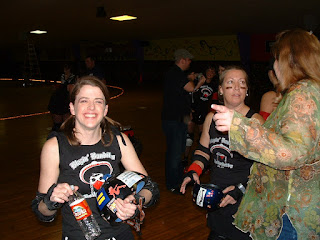 Last night I went with Christy (Savage Rose) to Pearwood Skate Center out in Pearland to see the Blazin' Banditas (formerly ACRG's Violations team) take on the new South Side Roller Derby league that is raising money for a banked track. My assumption as to why, when they have a Roller Rink at their disposal and are training and hosting bouts at their own falt-track, they are going banked- track is twofold. First off, the chick who is in charge out there rubbed some Flat Track chicks the wrong way and has been more or less blackballed by HRD. Secondly, I think the TXRD Lone Star Rollergirls have been trying to get another Texas banked track league started and may be assisting in some way. Might as well. Anyway, the Pearwood Skate Center is not a great place to see a bout, but it was OK (nothing like HRD).
The Blazin' Banditas are the new incarnation of my favorite Alamo City Rollergirls team last season, The Violations. These gilrs split off from the league after last season due to disagreements with ACRG management. ACRG is owned and operated by TWO skaters in the league and their accounting, etc is not transparent. Also, their promotion and production is lacking. That being said, it's a good little league. Unfortunately, ACRG took the path of least resistance this season when the Violations left and shrunk down to three teams instead of going for it and getting enough girls to either re-form the old team or just start a new one. Bad sign for the future. Anyway, the Blazin' Banditas only have 7 skaters, so they all pretty much have to skate non-stop during the entire bout. Star skaters on the BB's from ACRG last season include Tamale Hatchet, Honey Must Hurt and Copper Penny. Kay Mala is the manager/coach.
Basically the BB's pretty much creamed the SSRD. No surprise, given the experience, but the BB's are going to need some more skaters. The endurance of these girls was incredible, but going up against other all-star teams they will not have a chance unless they are able to rotate more girls in and out.
Rusty Pickup (referred to as "Rusty Truck" by announcer/SSRD league owner Brenda was there but wasn't permitted to announce, which was a shame since the announcing was so non-existent and bad that I can't really even call it announcing. The reffing was not so hot, either, but I have seen worse. The final score I can't remember, but it was a blow-out. It would have been worse, but inthe 2nd half SSRD caught a few scoring breaks- I guess to keep the crowd interested. Attendance was approximately 80 non-skaters. $5 cover was worth it, I must say.
HRD girsl in (LOUD) attendance included Becky Booty, Patsy Crime, Tawdry Hepburn and Savage Rose. Nurse Morphine's parents were there to cheer on the Blazin' Banditas. So cool! The pic of the lady wearing the Psych Ward Sirens tee is Morphine's mom. Dirty Sanchez, Rusty Pickup and Mrs. Pickup were there too. I enjoyed it, but I am ready for the major leagues. I hope the Blazin' Banditas will keep at it and play Battleground Roller Derby soon- I like the idea of an unaffiliated travel team!
Posted by David Beebe at 2:08 PM

We're still recruiting - up to 30 skaters and still growing. All of us are learning together and HRD attending Thursday practice is a huge help!

Battleground Roller Derby now has over 40 skaters and at least four coaches and a few trainers.

The league is growing every day and displaying a professional and fun attitude.

We'll give you a bout soon!

Congrats to the Blazin' Banditas! We at Battleground Roller Derby would love an opportunity to jam with you gals someday!

And to MansRuin, don't go getting all defensive because you don't agree with the author of the article or Whip's comment. Y'all got creamed, plain and simple. Get over it! It's not like you're HRD or anything of that caliber!

would love to have you back, colonel!

Hi !.
might , probably curious to know how one can collect a huge starting capital .
There is no need to invest much at first. You may commense to get income with as small sum of money as 20-100 dollars.

AimTrust is what you thought of all the time
The company represents an offshore structure with advanced asset management technologies in production and delivery of pipes for oil and gas.

It is based in Panama with structures everywhere: In USA, Canada, Cyprus.
Do you want to become really rich in short time?
That`s your chance That`s what you desire!

I feel good, I began to take up income with the help of this company,
and I invite you to do the same. If it gets down to select a correct partner utilizes your savings in a right way - that`s the AimTrust!.
I make 2G daily, and my first investment was 500 dollars only!
It`s easy to start , just click this link http://jisekihi.angelcities.com/xotema.html
and go! Let`s take this option together to become rich

Hi !.
You re, I guess , perhaps very interested to know how one can make real money .
There is no need to invest much at first. You may begin earning with as small sum of money as 20-100 dollars.

AimTrust is what you thought of all the time
The firm incorporates an offshore structure with advanced asset management technologies in production and delivery of pipes for oil and gas.

It is based in Panama with offices around the world.
Do you want to become an affluent person?
That`s your choice That`s what you really need!

I`m happy and lucky, I started to take up income with the help of this company,
and I invite you to do the same. If it gets down to choose a proper companion who uses your savings in a right way - that`s AimTrust!.
I earn US$2,000 per day, and what I started with was a funny sum of 500 bucks!
It`s easy to start , just click this link http://binybafem.builtfree.org/oxatyha.html
and go! Let`s take our chance together to get rid of nastiness of the life