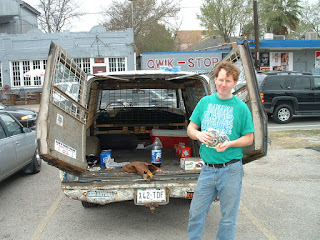 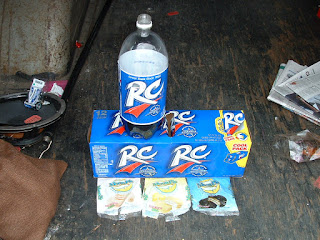 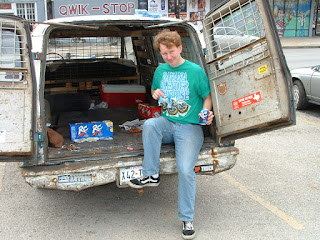 Today a group of people across the globe consumed RC Cola and Moon Pies while sending mental and cosmic energy to the original "Moon Pie Guy" Bill Paulk, who is dying of leukemia.
There's much more to this story, of course, but the end result was participation from folks as diverse as Moon Pie Bakery President Sam Campbell IV to San Antonio Roller Derby announcer D-LUX. Here's a couple of pictures of Allen Hill and I savoring a fine southern meal on the former site of the PIK N PAK, Waugh Dr at Welch in Houston. This space is now the Rudyard's parking lot.
We were later joined by Eric Feighl, who, despite being full of Stag's Head Pub Grub lunch ate a Vanilla Moon Pie and drank an ice cold RC for Bill.
Pictures include Allen Hill posing with the Murgatroyd and a shot of the 2 Liter and three assorted Moon Pies I consumed over the cours of an hour (I went a few extra miles- starting early and finishing late).
WE LOVE YOU BILL!!
Posted by David Beebe at 6:27 PM

thats sooo nice
i thanks you guys sooo much for tha.
i miss my uncle bill soo much. he was my best friend and now hes gone