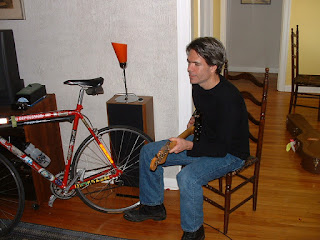 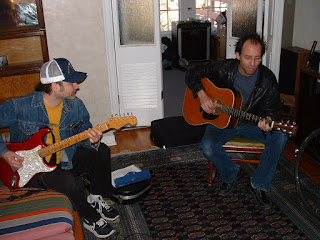 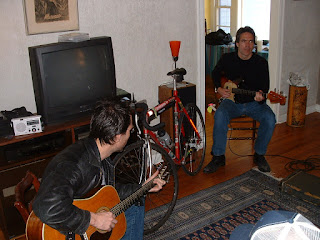 I'm in Alpine- have been in Marfa for about 12 hours.
I spent Monday night in Austin at Landis' house. My plan was to have gone to the Meshbanes show at Trophy's but when I got there they weren't playing. I wound up at the Hole in the Wall on a whim and caught a two-man act possibly called the Cartwrights. Drums and vocals. No other instruments. They were actually great after initially appearing to be a total fashion joke. Really cool songs- great stage energy. Dominic and I sat there and both went from being mildly annoyed to very enthused about the act.
I went to bed and Landis and I got up to meet Matt Eskey at Thunderbird coffee, which is within walking distance from his house. Paul Minor let us there and I shot these pictures of their practice they were having as I left for an Allen Oldies Band show they're playing this weekend.
Posted by David Beebe at 3:20 PM