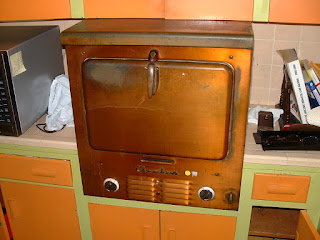 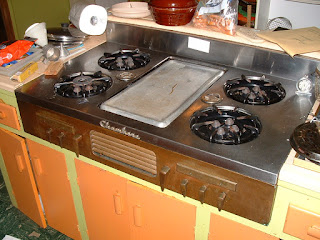 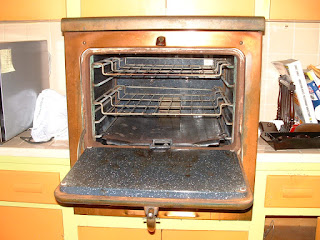 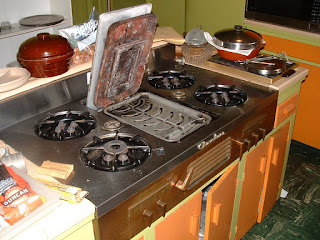 I went to mini storage today and pulled out the Chambers oven and rage that came from my grandmother's house. The kitchen in that house was bulit in 1953- using top of the line appliances built into the walls and counters. Surviving items include the (broken) GE refrigerator (pea green) and the Chambers set.
I initially tried to sell the Chambers set for my family and asked $800 or maybe $650 for the pair. Very cheap given that the hippest untra-rich kitchen re-dos have these old Chambers in them. Particularly this style- copper and stainless. For real, awesome appliances. "Cook with the gas off" was one of the oven's slogans. Keep the vent partially closed and heat with just the pilot light- enough to warm up any dish. Anyway, these items will be part of the Padre's Marfa kitchen and I'm taking them to West Texas with me next week so their measurements can be incuded. This will allow us to build them into the club. It's really the perfect use for these great items. My grandmother was a serious and wonderful cook and she would be happy that these are going to be used in a pro kitchen. I am too, as they will use less gas and create less stary heat than say a Vulcan or Blodgettt commercial set, but have the cooking capacity we'll need- beneath that of a true commercial kitchen but above that of home specs.
The pictures were taken just before I took them out of the house. The house is gone and has been replaced by 2 mansions at 9 and 10 Beebe Ln in Bunker Hill (Houston) TX. - David
Posted by David Beebe at 1:19 AM

I know this post is over a year old - did you sell this Chambers oven and range? If not I will drive to Texas and buy them from you!!! I grew up in a house with these exact appliances and of course took them for granted - now I'm all grown up and a chef and I've always wanted my Chambers copper range and oven - the first and only for me :) Please let me know!

Who knows where to download XRumer 5.0 Palladium?
Help, please. All recommend this program to effectively advertise on the Internet, this is the best program!

[color=red]The Most Affordable XRUMER/BACKLINK SERVICE Online!
The EFFORTLESS and POWERFUL WAY TO BUILD MASSIVE # OF BACKLINKS
[color=black]
200,000 BLASTS of your URLs+ Anchor Tex, message, pictures (can be spinned) etc
$10 USD (shared with other clients like a carpool), or
$25/200k for exclusive!(you control EVERYTHING)
$50 Exclusive @ 500,000 blasts.
(Complete reports will be given to clients)

[IMG]http://img697.imageshack.us/img697/1540/arrowdownh.gif[/IMG]
For orders, questions or concerns? Email: [u]formless.void47 at gmail.com [/u]
Note:
1. For STRICT Whitehat sites, it is advised to create buffers to pass on linkjuice. i.e. social bookmarks, cloaked pages etc.
You can blast the site directly, but it entails risk.
Using buffers are 100% safe, speaking from experience.
2. Xrumer is a very technical tool. Just describe to me what sorts of effects you want and well make it happen!
If you want to buy Xrumer?
>>>>> http://cloakedlink.com/chzgykebsd <<<<<<