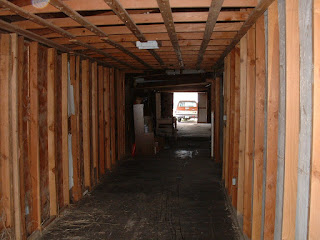 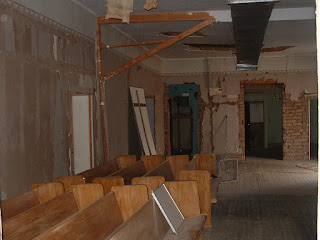 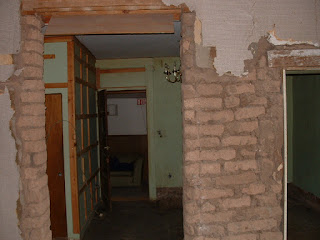 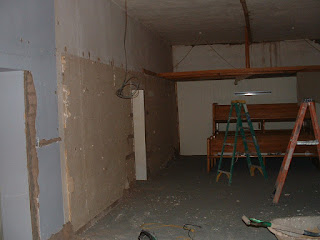 I arrived in Marfa late Tuesday night. The drive is so far- even from Canyon Lake, where I tried to visit a friend but couldn't locate her- maybe on the way home.
Road construction between Alpine and Marfa is pretty brutal. HWY 90 is now a dirt road going both directions for about 8-12 miles. I arrived at the funeral home about midnight and decided to go over to Adam Bork's house to see if he was still awake, knowing his night owl tendencies. He sure was, so I brough in a few Lone Stars and we watched YourTube videos of 70's American cars. Nerds.
Anyway, I got back to the club/funeral home and got my flashlights out. I had brought two Coleman lanterns that I checked beforehand (last time I used them was Sept '98 and the fuel was still inside!- bad idea). What I didn't bring was matches. Anyway, the Mag Lite sufficed to get into the place, which has now been partially demoed and look around. I'm sleeping on a too-short couch in the office- a great space, actually, for an office. For my next trip out I'll hopefully bring a fold out small couch that will live here for good (likely in the band room as a usable band bed).
You can see in the pictures the difference between the photos I posted earlier and what's there now. Much better, altough the raw adobe walls have a really rough look to those who are not used to them. Authentic adobe housing and coomercial space is very sought after in these parts- for authenticity, aesthetics and fashion. I tried to take some picture angles from the same spots as in the previously posted pictures for comparison. Most everything speaks for itself.
I brought the big Brown Suburnban and RC Cola trailer full of stuff for the club, as it is my goal to bring as much as possible to town every trip so that the final move will be reasonable.
I brought the Chambers stuff, 8 cast iron ceiling fans (most from the 20's and 30's- totally awesome, some sound and light stuff, most of my collection of high quality pots, pans and cookware (assorted Le Creuset and bakeware) and a bank of blue lockers from Lamar High School that I've had since junior year. The lockers will be used for employee storage and as a lock box for band valuables while bands are staying with us. The bank has a total of 8 lockers.
Anyway, Wednesday morning I unloaded that stuff into the back garage space (that formerly housed the funeral cars.
There is no running water in the building right now, and there was no operational electricity either. Since my arrival, Jerry has turned on some electric so now I have a small heater and can read by the light of some old flourescent office ceiling lamps.
The first night was spent by mag light. Last night I had purchased kitchen maches in Alpine, so I had the Coleman lanterns going. Randomly, I realized the electricity in the office was on, so I was able to use the electirc heater (it below freezing at night this week and I saw some snow in Alpine yesterday). I'm wearing my long underwear plus jackets, etc, so I'm not really cold unless I'm out in the wind. More about my trip to Alpine (Wed) later.- David
Posted by David Beebe at 11:07 AM

Hi ... I am an old friend of Bill Miller from his Austin days. He was my next door neighbor & parish priest at St. James. I'd love to know when Padre's is going to open. My husband & I plan to come to Marfa for a visit. Hope we can coordinate it with Padre's opening. My friend James Linville is working on the project, but I haven't checked in with him to see how it's progressing.
I was Cheryl Murray in those old days, but have remarried & am Cato now. Hope to hear of the progress & am looking forward to visiting Marfa again ... that's my favorite part of the world (Marathon, Ft. Davis, Marfa, Big Bend)!!!

Hi David, I stopped by your place in Marfa, nice.

I'm headed to Las Cruces the 28th to play for a wedding. I'll have my band at this deal. Kinda refreshing to get everyone together. Hope all is well , tell all them crazy picin friends I said hi.

Clay Mac
P.S. enjoyed playing music with you and all your friends in Del Rio